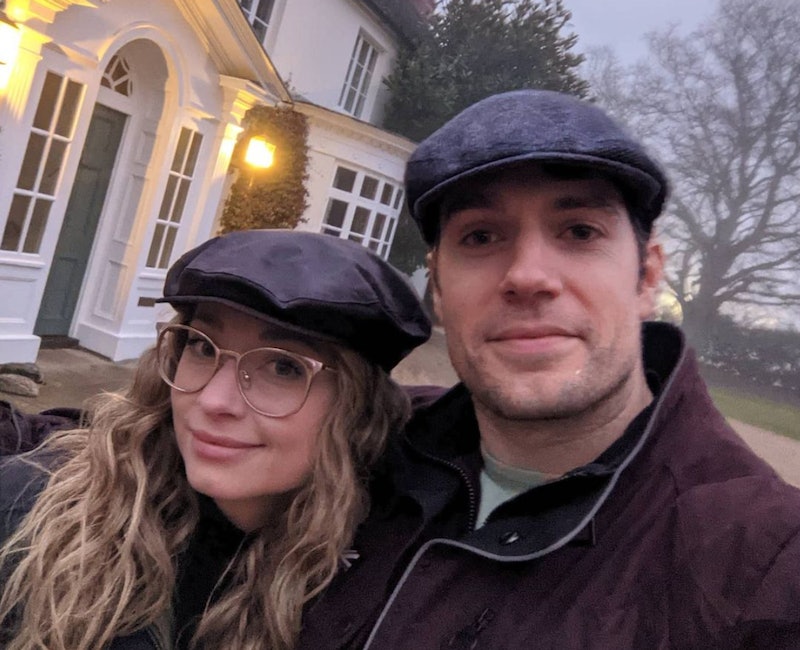 It’s not easy dating Superman — just ask Henry Cavill’s current girlfriend, Natalie Viscuso. After the Justice League actor confirmed that he found love with Viscuso, 31, on Instagram last spring, the actor’s fans immediately went into panic mode. One commenter wrote that Viscuso “cannot be trusted”; several others claimed that the couple’s first photo together wasn’t even real. Shortly after making their social media debut, an overwhelmed Cavill returned to Instagram to ask his followers to respect their relationship and stop sending his girlfriend unnecessary hate.

It shouldn’t come as a surprise that some of Cavill’s fans came down so hard on Viscuso. Cavill’s ex-girlfriend, actor Kaley Cuoco, has been very open about how her 10-day relationship with the Man of Steel in 2013 brought on levels of attention that she never could’ve prepared for. “I had no one following me until I met Superman,” the Big Bang Theory star told Cosmopolitan in 2014. “I’ve been in this business for 20 years, and my whole life, I could go anywhere, do anything. There has not been one paparazzi photo of me until like seven months ago. The recognition has been crazy.”

It seems that, at least for now, Cavill and Viscuso’s relationship has managed to survive. Quickly, the couple realized that it was best to keep their budding romance out of the spotlight, and they rarely post about each other on social media. This, of course, is not ideal for fans who just want to know more about the actor’s relationship with Viscuso, who works as the vice president of television and digital studios at Legendary Entertainment. Fortunately, we’ve documented the duo’s complete relationship timeline, from the moment she first beat him at chess until now.

On April 10, the Enola Holmes actor confirmed that he is no longer single by sharing a photo on Instagram of him playing chess with Viscuso. “This is me looking quietly confident shortly before my beautiful and brilliant love Natalie, destroys me at chess,” Cavill captioned the image. In the photo, he looks at his new girlfriend lovingly as she tries to figure out her next move.

Viscuso confirmed their relationship as well by posting the same photo on her Instagram feed. “Just teaching my dear Henry how to play some chess,” she wrote. “Or...maybe he let me win?” Many fans of the 37-year-old actor were thrilled to see him so happy, but others were completely shattered to learn that Cavill was officially off the market.

“Please tell me this is for a movie,” one fan commented with a crying emoji. “I’M HAPPY BUT SUFFERING,” someone else wrote. It’s also worth noting that many of The Witcher star’s followers were very confused because, in the days leading up to Cavill’s post, tabloids wrongly reported that he was dating a Canadian scientist named Danielle Beausoleil.

May 2021: Cavill Addresses The Haters

Roughly one month after Cavill and Viscuso confirmed their relationship on Instagram, the Immortals actor returned to the platform to defend his girlfriend from online trolls. “I couldn’t help but notice that there has been some social animosity of late,” he wrote alongside a selfie of the pair on Instagram on May 16. “It’s becoming increasingly prevalent on my feed. There has been lots of, let’s call it speculation for now, about my private life and professional partnerships.”

Cavill went on to explain that although he “appreciates the passion,” the scrutiny has gone too far. “It has come to such a point that I needed to say something, which in itself, is a bad thing,” he continued before encouraging his followers to lead with kindness and consideration for others. “To you out there who are expressing your disdain and showing your displeasure through a surprising variety of ways, it’s time to stop,” he wrote.

Elsewhere in the caption, the actor acknowledged that people like to gossip, particularly about celebrities, but that their unsolicited opinions are causing real problems. “Your ‘passion’ is misplaced, and it causes harm to the people I care about most,” he continued. “Even your most conservative of negative assumptions about both my personal and professional life just aren’t true. Let’s embrace this age of social enlightenment together, and move forward with positivity.”

The movie star closed out his open letter by reassuring his followers that he’s doing well despite the hateful comments that he and his girlfriend received since making their Instagram debut. “I am very happy in love, and in life,” he wrote. “I’d be enormously grateful if you were happy with me. If you can’t bring yourself to be happy with me, then at the very least try to do yourself proud and be the best version of yourself.”

After all the hate, Cavill and Viscuso seemingly decided it was best to keep their relationship private. The two didn’t post about each other for several months, and it wasn’t until August that Viscuso hinted that they were still going strong. On Aug. 7, she shared a photo of her pup wearing one of Cavill’s dog’s cutest accessories: a hat that looks like a lion’s mane. “Kal so kindly lending Meat his game gear. #LionsRugby,” she wrote.

Although the couple prefers to keep their romance low-key, Viscuso couldn’t help but gush over her boyfriend on Instagram when he graced the cover of The Hollywood Reporter in November. “I am so, so proud of you, Henry,” she wrote alongside the magazine cover. “You truly are the greatest man I have ever known. The Hollywood Reporter did an incredible job with this cover story — it really is a great read. SO PROUD I’m literally crying.”

If you want more details about Cavill and Viscuso’s relationship, you’re going to have to wait for the notoriously low-key couple to divulge more details on social media. For now, this is all we have on these two, but we will continue updating this timeline with any major developments.