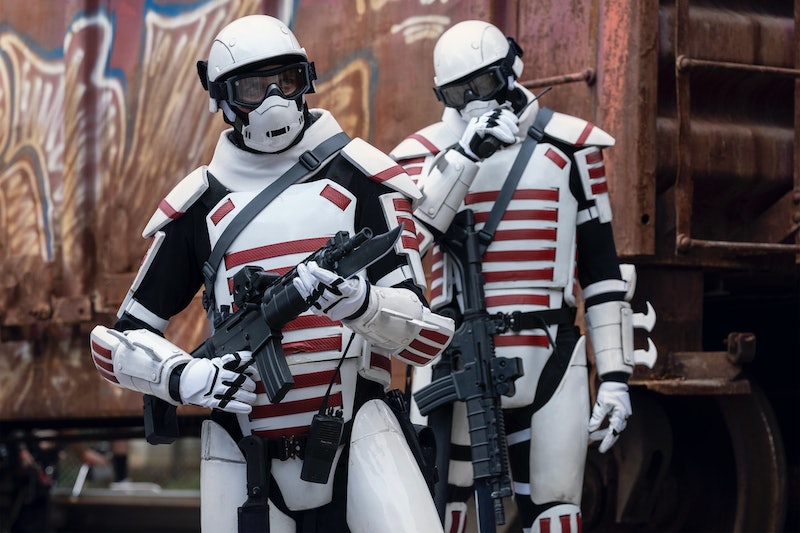 Spoilers ahead for The Walking Dead Season 10, Episode 20. The group was excited but wary about meeting a new, potentially advanced community when they came across the Commonwealth earlier in Walking Dead Season 10 (and with their track record... who could blame them?). As it turns out, they were right to be nervous. In “Splinter,” we finally get a closer look at Eugene, Ezekiel, Princess, and Yumiko’s entrance into the formidable new community — and by the end of the episode, after being locked in separate holding rooms, it seems like they’re all about to be executed.

Obviously, at this stage of things, to be naively open to strangers can be fatal — so the Commonwealth taking extreme measures to defend its people does not necessarily make it a villainous community. At the same time, they’re strong enough to be a major threat to the group. Which leaves one big question: is the Commonwealth good or bad?

Of course, you can always turn to the comics to see what might happen. But if you prefer not to spoil yourself, here is some evidence supporting each possibility based on what we’ve seen so far.

The Commonwealth Has A Positive Mission

One argument in the Commonwealth’s favor, based on “Splinter,” is given by the community itself. During a confrontation with one of the soldiers, Princess demands information about an injured Yumiko. He tells her that the Commonwealth is “for the benefit of all, and for all who seek solace at our gates,” so of course she is being treated well — and, he insists, wouldn’t any community with a lot to protect be careful about strangers?

The Commonwealth Is Violent

Just moments after the Commonwealth soldier assures Princess that they’re good guys, he leads her outside where her friends are all blindfolded in a line with armed guards around them, ostensibly about to be shot. Defense is one thing, but the group has not done anything dangerous enough to warrant an execution (especially after Princess was so forthcoming, despite her initial hesitance).

Also, elements of the Commonwealth are eerily reminiscent of a past villain: Terminus. Throwing newcomers into dark, shadowy boxcars? Trying to kill them all shortly after arrival? We know how that turned out — and it’s easy to imagine Eugene, who was there for that disaster, wishing Rick would show up to say “they’re screwing with the wrong people” right about now.

We Already Have A Big Bad

From a pure storytelling perspective, part of Season 10C has already been dedicated to a mysterious new threat: the Reapers. It would be complicated to introduce another true villain at this point, so it follows that the Commonwealth could be a more nuanced threat (such as Alexandria, which did things differently from our core survivors but wasn’t actually straight-up evil).

Though we still haven’t seen inside the community, recent teasers for The Walking Dead Season 11 show glimpses of a functioning society — one with bakery cakes, cash registers, laughter, and ice cream. Even if the Commonwealth isn’t the kindest community, these teasers seem to point to something good. Of course, being The Walking Dead, there’s still a bit of sinister vibe. So the answer to the Commonwealth question might just be that they’re a blend of good and bad. But what post-apocalyptic community isn’t?