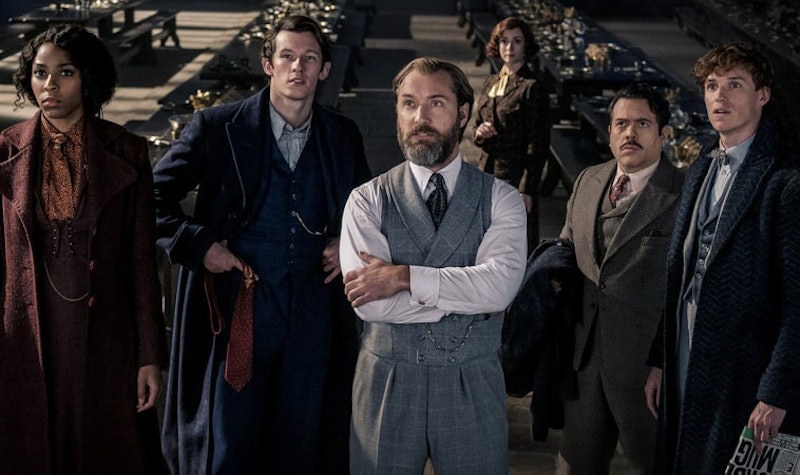 The latest film in the Wizarding World franchise premiered in theaters earlier this year, and now, fans who want to watch the film at home are being rewarded for their patience: Fantastic Beasts: The Secrets of Dumbledore finally hits HBO Max later this month.

Starring Eddie Redmayne, Jude Law, and Mads Mikkelsen, the third installment in the Fantastic Beasts series picks up a few years after the events of the second film, The Crimes of Grindelwald. In the new film, Dumbledore (Law) and his allies, including Newt Scamander (Redmayne), continue their fight to defeat Gellert Grindelwald’s (Mads Mikkelsen, taking over the role from Johnny Depp) army of dark wizards. So far, reviews have been mixed.

So when can Harry Potter fans experience the magic from home? Below, where and when to stream Fantastic Beasts: The Secrets of Dumbledore.

Where Is Fantastic Beasts 3 Available To Stream?

Following its exclusive theatrical release, Fantastic Beasts: The Secrets of Dumbledore will become available to stream on HBO Max starting May 30. Subscriptions start at $9.99/month (or $99.99/year) for streaming with limited ads, or $14.99/month (or $149.99/year) for the ad-free plan.

There’s no word yet as to when Fantastic Beasts: The Secrets of Dumbledore will become available to rent or buy on VOD streaming platforms — including iTunes, Amazon Prime, Vudu, and Google Play, among others. Bustle will update this article as more information becomes available.

What Are Critics Saying About The New Fantastic Beasts Movie?

The reception for Fantastic Beasts: The Secrets of Dumbledore has been lukewarm; currently, the movie has a 47% rating from critics on Rotten Tomatoes. Jake Coyle, a film writer and critic for the Associated Press, called it “a bit of a bore” in his review, adding: “You could say that The Secrets of Dumbledore … is comparably more straightforward than its predecessors. But over-complication has been the nature of these movies — big, teaming blockbusters designed to marry hefty CGI effects with even weightier political allegory.” The Washington Post’s Michael O’Sullivan gave the film a slightly more favorable review, writing: “Potter fans (guilty as charged) will grade [Secrets of Dumbledore] on a curve, despite its weaknesses. It may not be the most spellbinding of the prequels so far, but it does advance this saga in an entertaining, if less than fantastic way.”

Regardless of what the critics have to say, though, the film is rolling out amid a storm of controversy. The studio has been criticized for removing LGBTQ+ content for Fantastic Beasts’ release in China — specifically, two of Dumbledore’s lines about his past relationship with Grindelwald — and star Ezra Miller has been in hot water recently, following their multiple arrests in Hawaii earlier this year. Add to that the continuing furor over J.K. Rowling’s statements about trans women, and the lingering sting of Johnny Depp’s replacement (which forced after he lost a libel suit against the Sun, which published a story calling him a “wife beater”), and it’s no wonder why the future of the Fantastic Beasts franchise is reportedly unclear.

More like this
Sadly, You Can’t Stream 'Elvis' — Yet
By Morgan Leigh Davies
Netflix Settles With Mo'Nique After She Sued For Racial & Gender Discrimination
By Jake Viswanath
What’s New On Netflix: The Return Of 'The Umbrella Academy'
By Arya Roshanian
What’s New On Netflix: J.Lo’s Documentary & A Melissa McCarthy Series
By Arya Roshanian
Get Even More From Bustle — Sign Up For The Newsletter

This article was originally published on April 16, 2022