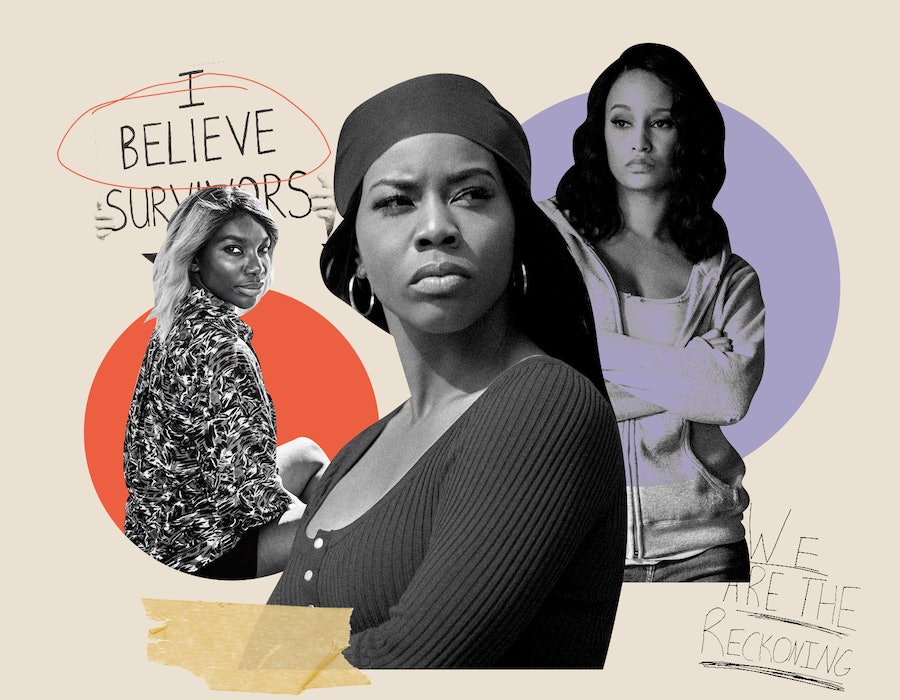 Photos Courtesy of I May Destroy You and P-Valley, Lucianna Faraone Coccia/Getty
By Treva Lindsey
Aug. 18, 2020
Amplifying Black Voices

The coronavirus pandemic has shocked Hollywood to its core, as productions scramble to establish new filming protocols to ensure audiences still receive the uninterrupted stream of TV that has become the norm. But headlines about how we’re going to run out of TV (or perhaps we already have run out of TV?) are distracting from what’s right in front of us: two groundbreaking TV shows airing now created by and starring Black women that will easily go down as two of the best shows of 2020.

HBO’s I May Destroy You, which emerged out of Coel’s personal experience with sexual violence, follows Arabella (Coel), a 20-something writer who makes a morning-after realization that she’s been the victim of drug-facilitated sexual assault after a night of partying. But to describe the show as only this does a disservice to the poignant, nuanced world Coel has crafted. Coel packs ruminations on the knotty politics of consent and coercion into taut 30-minute episodes that reached into depths of my own experiences as a Black woman and as a survivor of sexual violence. Through dramatizing numerous incidents encapsulated under the broad category of sexual misconduct, Coel and her sublime cast deliver episode after episode of perfectly executed discomfort and emotional wreckage, with just the right amount of expertly timed humor and intimate familiarity.

I May Destroy You is borne out of the #MeToo era, as are shows like Unbelievable and an influx of documentaries and docuseries that have cropped up in the last three years chronicling the abuses of the likes of R. Kelly, Harvey Weinstein, Jeffrey Epstein, Michael Jackson, Russell Simmons, and Larry Nassar. But Coel’s use of her experience with sexual violence in her art takes us back to the roots of #MeToo, which, before the hashtag, was a movement founded by Tarana Burke to support women and girls of color affected by sexual violence.

While the show creatively refocuses our attention onto Black women, I May Destroy You also brings attention to how Black queer men experience sexual violence and its aftermath. In one episode, one of Arabella’s best friends Kwame, a Black gay man, is sexually assaulted by man he met via a dating app with whom he initially has a consensual and pleasurable sexual encounter. Although Arabella is believed by police and offered some semblance of support as they attempt to find her rapist, Kwame’s assault is met with confusion and skepticism from an officer who has little understanding of the politics of Grindr and Kwame’s sex life. Whereas racism and sexism affect how Black women encounter police when seeking justice, Black gay men confront homophobia and racism when they come forward about their victimization.

But what’s most ambitious and entrancing is I May Destroy You's refusal to avoid several moments of trigger warning-worthy content. From numerous acts of sexual assault, to a false accusation of rape, to stealthing, period clots, and substance abuse, the show is unwavering in its commitment to keeping it real without sensationalizing any of the darker elements it depicts. Like in life, these devastating, often confusing incidents live alongside moments of levity between friends and raucous nights out — times when strangers are delightful and not predatory. I May Destroy You delivers “imperfect” victims who grapple with consent, sex, and pleasure, who are capable of being both the perpetrator and the victim. To borrow from writer and cultural critic Joan Morgan’s conceptualization of hip hop feminism, I May Destroy You f*cks with the grays. It forces you to be reflexive about your own understanding of sexual violence. The show unsettles you.

From the opening bars of P-Valley’s theme song, Black women become the center of this Southern, Black, rural universe. As Jucee Froot raps, “These n****s grind hard, but these bitches grind harder, climbing up the pole, just to get out the bottom,” the stage is set for a story about poor Black women, labor, and illicit economies. The attention to detail Hall achieves through the writing, the set, and talented cast immediately makes you care about the folks working at and frequenting the Pynk, the strip club in the fictional Mississippi town of Chucalissa.

P-Valley debuted in a moment when we as a nation are interrogating the mattering of Black lives. Far too often, even those who affirm #BlackLivesMatter still devalue certain Black lives. In P-Valley, poor, queer, dark-skinned, non-binary, sex-working, and formerly incarcerated Black folks are the main and supporting characters of the show, and their humanity isn’t being redeemed or rendered “respectable.” Instead, the characters embody a richness that insists viewers interrogate why we don’t see their lives as valuable in the first place.

The show also offers a more honest conversation about sex, illicit work, and women’s sexual agency. By centering Black women and genderqueer folks, we get a glimpse of how they navigate a scarcity of opportunities and the desire for autonomy in a world hellbent on telling them that they're disposable. With few options in this Southern town to pursue their dreams, the Pynk becomes a refuge, offering a semblance of financial security that can help them actualize their futures.

Unlike The Sopranos’ famous scenes at Bada Bing! or How I Met Your Mother’s jaunts to the Lusty Leopard, P-Valley takes pains to emphasize the point of view of the stripper, and particularly the physical labor and skill stripping requires. In numerous heart-stopping scenes in which the dancers defy gravity and exhibit awe-inspiring agility, Hall’s camera frames them like athletes. In one moment, the music fades out until all we hear are the breaths and bodily noises of a dancer as she navigates a particularly daring move on the ceiling. The choice to center the stripper's experience while dancing versus that of those throwing money onto the stage is a full-bodied rejection of the male gaze. We are left in awe.

In P-Valley, Black bodies are expressive in myriad ways. There’s explicit phone sex, ecstatic praise and worship in a church, teenage girls mastering moves for their dance squad, and sensual dances in private rooms. The camera’s gaze on them is dynamic and affirming, and refreshingly, not male — a departure from the norm of television shows. We see the injuries these women incur from pole tricks, bruises caused by abusive partners, stretch marks from pregnancies, lactating breasts, and marks on their bodies derived from past trauma. Their bodies aren’t just objects to be ogled by men — their bodies reveal parts of their stories. Their bodies are at once mundane and spectacular.

Amid a global pandemic disproportionately affecting Black communities and an uprising centered around anti-Black police violence, P-Valley and I May Destroy You answer a call to no longer pull away from the worst of what’s happening — whether that be widespread sexual violence or displacement of poor Black communities. The worst, however, can’t extinguish Black joy, love, intimacy, laughter, friendship, or imagination.

In a barren summer TV landscape of light fare like game shows and sitcom reruns, these shows double down on the power of character development and discomfort. They demand your full, undivided attention or you may miss everything. Their willingness to go where most haven’t makes I May Destroy You and P-Valley the breakout shows of Summer 2020. The fact they are created by and star Black women is icing on a delicious, multi-tiered cake.