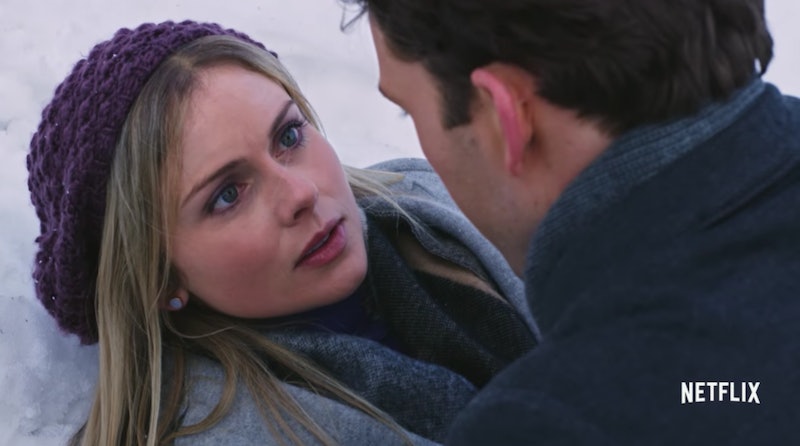 A must-see holiday movie, Netflix’s A Christmas Prince quickly whisks you off into a fairytale — but the key word there is fairytale. Though you might wonder if the country of Aldovia, where A Christmas Prince is supposedly set, really exists, you’ll just have to prepare yourself to be disappointed.

Yes, as it turns out, Aldovia isn't a real country. Pass the tissues. (Though if you just want to check out the film’s castle, Romania’s Peleș Castle is very real and was used for A Christmas Prince’s

This shouldn’t come as a major surprise. The first clue probably should have been how similar Aldovia sounds to The Princess Diaries’ make-believe country of Genovia, a fictional land that was said to be located somewhere between France and Italy. Like Genovia, A Christmas Prince’s Aldovia is constitutional monarchy located in Central Europe, although it's not as clear exactly where it sits on the map. (It’s not just fictional country names: the two movies definitely echo each other. As Entertainment Weekly points out, the Christmas flick appears to show notable parallels to 2004's Princess Diaries 2: A Royal Engagement, among other American-girl-meets-foreign-royal films. But then, there’s only so much room for innovation in the well-established sub-genre.)

Fictional locations are a staple of fairytales (why confine a fantastical story to reality when you can dream up something new?). While classic tales may have taken place "once upon a time," more modern adaptations have identified specific settings. Take the film Ella Enchanted, starring Anne Hathaway, for example. The main character, Ella, was born in the kingdom of Emir, which most certainly doesn't exist in real life. Then there's Frozen, set in the fictional kingdom of Arendelle, which is definitely not a real place on this earth, though it's inspired by Norwegian locales. There's also Aladdin, which is set in the fictional kingdom of Agrabah; while not an actual place, per se, the kingdom was informed by cities in South Asia and the Middle East. In these films and in A Christmas Prince, the fictional setting adds to the fairytale magic.

A Christmas Prince features Rose McIver as a New York City-based journalist named Amber, who goes undercover to investigate the playboy-like ways of Aldovia's future king, Prince Richard (Ben Lamb). The two obviously fall in love after Amber learns that Prince Richard's reputation as a player was blown out of of proportion. But their relationship gets complicated when Amber comes to discover information that could threaten Prince Richard's rule as king.

Plot spoilers ahead. Amber returns back to her home in the United States after being outed as a reporter posing as a tutor in order to get inside information on Prince Richard's background. After things go awry during a Christmas Eve ball, Richard learns long-kept secrets about his family history that almost prevent him from ascending the throne. He is later crowned as his father’s successor, while Amber works at her family’s diner back home, trying to find a way forward. Unbeknownst to Amber, the newly-minted king has traveled all the way to the diner in search of her. He proposes as her father looks on from the storefront.

The film does a pretty good job at putting its own spin on the cliché "girl meets prince and falls in love" story that has been reinvented throughout the ages by spinning a narrative that keeps viewers intrigued.

A Christmas Prince seamlessly merges adventure and romance to create a story that will no doubt enchant and captivate viewers of all ages. Like The Princess Diaries’ Genovia, the kingdom of Aldovia quickly transports viewers to a world of palatial grandeur that helps to set the tone for this magical Christmas tale.

More like this
How To Stream Knives Out 2: When Will Glass Onion Be On Netflix?
By Radhika Menon
Here’s Everything Coming To & Leaving Netflix In December
By Jake Viswanath
The First Trailer For 'That '90s Show' Includes So Many Nods To The Original Series
By Jack Irvin, Alyssa Lapid and Grace Wehniainen
You Can Finally Stream 'Ticket To Paradise' At Home
By Chloe Foussianes
Get Even More From Bustle — Sign Up For The Newsletter

This article was originally published on Dec. 6, 2017