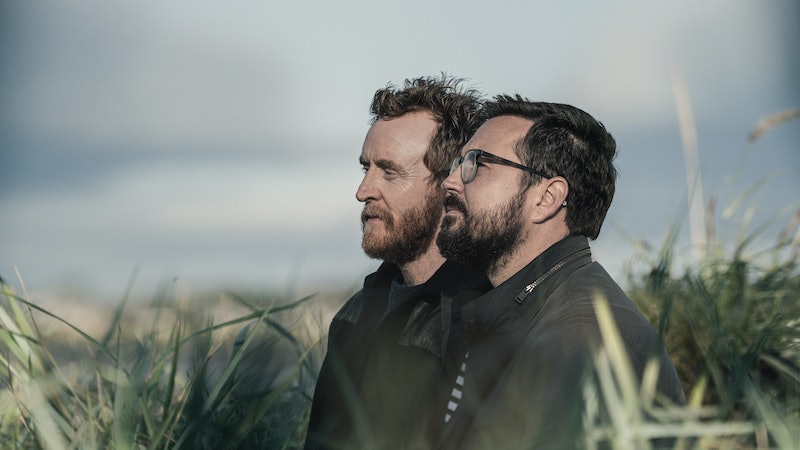 Starring Line of Duty’s Martin Compston and Your Honour’s Tony Curran, forthcoming two-parter Mayflies sets out to answer an incredibly difficult question: if asked, would you help your best friend to end his life? It’s the dilemma faced by Jimmy (Compston) when his best mate Tully (Curran) rings to share that he has a terminal cancer diagnosis. Through a series of flashbacks to their teenage antics in ‘80s Manchester, interspersed with the more sombre events of the present day, the show gracefully navigates this challenging territory. But is the new mini-series based on real events?

Though the forthcoming show is an adaptation of Andrew O’Hagan’s 2020 novel of the same name, the Scottish author has previously spoken about the true experiences that he drew from for the book. Though their names have been changed in Mayflies (O’Hagan is represented by the semi-autobiographical character Jimmy), O’Hagan was inspired to write it by a real-life friend Keith Martin, who was his best mate growing up and passed away in 2018.

As teenagers, the pair went to nuclear disarmament protests together and started a band and after documenting this youthful chaos, events of the novel then skip to the present. Here, thirty years later, Tully — the book’s fictionalised version of Keith — calls with some devastatingly sad news, and one final request.

“Everyone has a Tully Dawson,” reads a BBC synopsis, “the friend who defines your life. In the summer of 1986, in a small Scottish town, Jimmy and Tully ignite a brilliant friendship based on music, films, and the rebel spirit. With school over and the locked world of their fathers before them, they rush towards the climax of their youth — a magical weekend in Manchester, the epicentre of everything that inspires them in working class Britain. There, against the greatest soundtrack ever recorded, a vow is made: to go at life differently.

“Thirty years on, half a life away, the phone rings. Tully has the worst kind of news, and a request that will test their friendship, love, and loyalty to the limit… Mayflies is a memorial to youth’s euphoria and to everyday tragedy. A tender goodbye to an old union, it discovers the joy and the costs of love.”

“Keith was the leader of our gang,” O’Hagan told The Guardian. “He taught us to love the Jesus and Mary Chain and Martin Scorsese, and then, f*ck me, 30 years later he was teaching me how to die.” Elsewhere, he also addressed his decision to memorialise his friend in a novel. “He did the work and became this magical English teacher at Eastbank academy in Glasgow, talking to kids about books and films and music just as he had talked about them to us.” “If you are honest, you never stop being who you were,” he added.

More like this
Everything To Know About The 'Daisy Jones & The Six' TV Series
By Maxine Harrison and Brad Witter
'Consent' Is Not Just One Person’s Story, But Hundreds
By Shahed Ezaydi
Alan Carr's 'Changing Ends' Is A Witty Sitcom Based On His Own Life
By Darshita Goyal
'The Last Of Us' Has Officially Been Renewed For Season 2
By Darshita Goyal
Get The Very Best Of Bustle/UK
Sign up for Bustle UK's twice-weekly newsletter, featuring the latest must-watch TV, moving personal stories, and expert advice on the hottest viral buys.