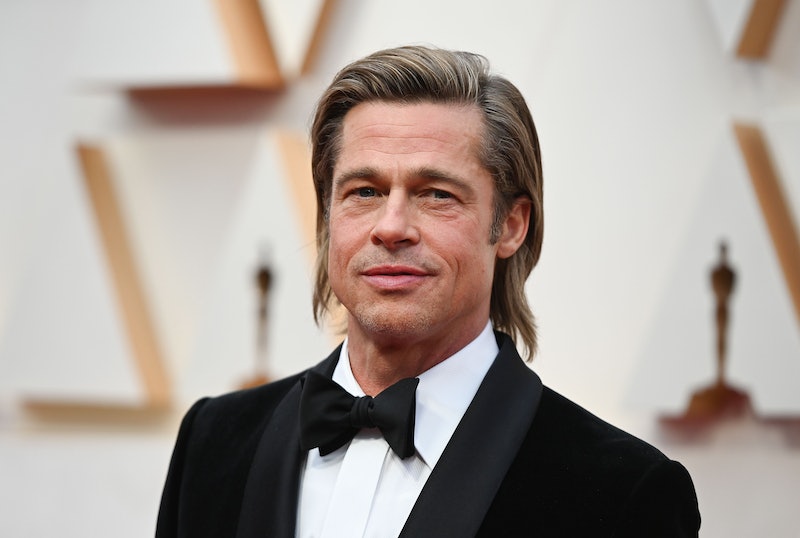 Everyone knows about his high-profile marriages to Jennifer Aniston and Angelina Jolie, but as of late, Brad Pitt’s dating life has been much more low-key. While promoting August 2022’s Bullet Train, the actor made headlines for wearing a skirt to the red carpet premiere, rather than arriving with a date on his arm. That’s not to say Pitt isn’t currently dating, though. An E! News insider revealed on Aug. 4 that the actor “very privately” goes on casual dates, “but does not have a serious girlfriend.” While playing the field, the source added, he’s been “enjoying people from different walks of life and is inspired.”

When it comes to speculation about his love life, Pitt has previously cautioned against reading too much into headlines. “I don’t go out of my way to avoid it; I just don’t seek it out,” he explained to The New York Times in December 2019, citing various media rumors. “I don’t know how many women they’ve said I’ve been dating the last two or three years, and none of it’s true.”

Although Pitt hasn’t confirmed any other relationships after Jolie filed for divorce in September 2016, the actor sparked dating rumors with Sienna Miller in 2017, and again in 2019 with Charlize Theron, as well as jewelry designer Sat Hari Khalsa and Search Party’s Alia Shawkat (the latter of whom has repeatedly denied they had any romantic involvement).

Recent relationships aside, Pitt has had a well-documented dating history ever since his breakout turn as a shirtless cowboy hitchhiker in 1991’s Thelma & Louise earned him the title of Hollywood’s most eligible bachelor. From his first engagement to his second marriage and beyond, here’s Pitt’s complete, undisputed dating history.

Pitt’s first engagement to Cutting Class co-star Jill Schoelen in 1989 ended after only eight months. The Ad Astra actor told The Sun in 2011 that Schoelen called him crying from the set of a movie she was filming in Hungary because “she was lonely and there was huge drama.” So he spent what little money he had to his name on a plane ticket to visit her. “I got there, went straight to the set where she was filming, and that night we went out to dinner,” he recalled. “She told me that she had fallen in love with the director of the film. I was so shocked I said, ‘I’m outta here’.”

During their brief courtship, Pitt escorted Christina Applegate to the 1989 MTV Video Music Awards — where she ditched him for another man. Appearing on Bravo’s Watch What Happens Live with Andy Cohen in 2015, the Dead to Me star refused to reveal the other famous man’s identity, though she did confirm that he was not an actor. She and Pitt have since seen each other, but did not go on another date after the VMAs. Meanwhile, the Fight Club actor’s other rumored flings that year included E.G. Daily and Robin Givens, who’s since denied ex Mike Tyson’s claims they had an affair.

Despite their 10-year age difference, Pitt hit it off with Juliette Lewis, then 16, on the set of their 1990 film Too Young to Die. After moving in together and making another film, Kalifornia, they ended their three-year relationship in 1993. “I still love the woman. There’s some real genius there. I had a great time with her,” Pitt told Vanity Fair in early 1995, naming Czech model Jitka Pohlodek as his girlfriend at the time. “Look, I don’t want to go into an explanation. She has her own views, and I respected those views. ... It was one of the greatest relationships I’ve ever been in. The problem is, we grow up with this vision that love conquers all, and that’s just not so, is it?” Around the same time, Pitt was rumored to have flings with Interview with the Vampire co-star Thandiwe Newton, as well as Thelma & Louise’s Geena Davis.

After meeting on the set of their 1994 thriller, Se7en, Pitt got engaged to Gwyneth Paltrow in 1996, only to split the following year. “I was such a kid — I was 22 when we met,” Paltrow explained to Howard Stern in 2015 of her cold feet. “It’s taken me until 40 to get my head out of my a--. You can’t make that decision when you’re 22 years old. … I wasn’t ready, and he was too good for me.” The exes have remained friends, however, and even exchanged “I love yous” during a June 2022 Goop interview.

The early 2000s golden couple met on a blind date in 1998 following Pitt’s brief romance with Meet Joe Black co-star Claire Forlani, and they married two years later. Amid reports of marital discord, Pitt and Aniston announced their separation in a joint January 2005 statement. “We happily remain committed and caring friends with great love and admiration for one another,” the statement read, in part, denying “any speculation reported by the tabloid media.” In more recent years, some nostalgic fans kept a close eye on Pitt and Aniston during the 2020 awards season for a possible reconciliation since they were both single. Despite several amicable work-related reunions of sorts, though, the pair never got back together.

While still married to Aniston, Pitt met Angelina Jolie on the set of Mr. and Mrs. Smith in 2004, before going public with their relationship the following year. In 2006, they welcomed their first daughter together, and Pitt also adopted Jolie’s first two children. They now share six children: Maddox, 20, Pax, 18, Zahara, 17, Shiloh, 16, and 14-year-old twins Vivienne and Knox. After marrying in August 2014, Jolie filed for divorce two years later. Six years later, Pitt’s at-times contentious divorce from Jolie remains ongoing, though they were declared legally single in 2019. The exes seem to be on better terms now, even if just for the sake of their commitment to co-parenting. Discussing her move to Cecil B. DeMille’s former estate with British Vogue in February 2021, Jolie said, “I wanted it to be close to their dad, who is only five minutes away.”

In August 2020, several outlets reported that German model Nicole Poturalski was Pitt’s new girlfriend, after they were seen arriving together at Le Castellet Airport in France. The pair, who previously sat in the same VIP box at a November 2019 Kanye West concert in Los Angeles, was also photographed near Pitt and Jolie’s Château Miraval rosé vineyard in the South of France. An insider told Us Weekly at the time that Pitt thought Poturalski was “beautiful and kind,” but noted the new relationship was just a casual one.

At the time, Poturalski was still married to Roland Mary, with whom she reportedly has an open relationship. In fact, she and Pitt met in Germany at Borchardt — a restaurant that the model’s husband owns — at a party following the August 2019 premiere of Once Upon a Time... in Hollywood in Berlin, according to various reports. When MailOnline contacted Mary in August, he declined to comment, though an unnamed friend said that the businessman was “philosophical” about his wife’s “close friendship” with Pitt and was “not interested in negativity or jealousy.”

By late October 2020, however, Page Six reported that Pitt and Poturalski had split, describing their relationship as being “totally over.” The outlet’s source claimed the romance “was never all that serious as it was cracked up to be,” and the breakup happened “a while back.” Indeed, another insider echoed those sentiments to People the following day, claiming, “Brad hasn’t seen Nicole since August. It was never a relationship. They saw each other a few times and that’s it. You can’t call it a split, because they were never together in the first place. It was a casual fling and that’s it.”

More like this
Who Is Nick Cannon Dating & How Many Kids Does He Have?
By Jordyn Tilchen and Radhika Menon
Gigi Hadid’s Dad Shared What He Knows About Those Leonardo DiCaprio Rumors
By Brad Witter
Hailey Bieber Just Responded To *That* Viral Met Gala Moment
By Radhika Menon and Sam Ramsden
Adam Devine Hilariously Let Everyone Know He’s *Not* Accused Cheater Adam Levine
By Brad Witter
Get Even More From Bustle — Sign Up For The Newsletter