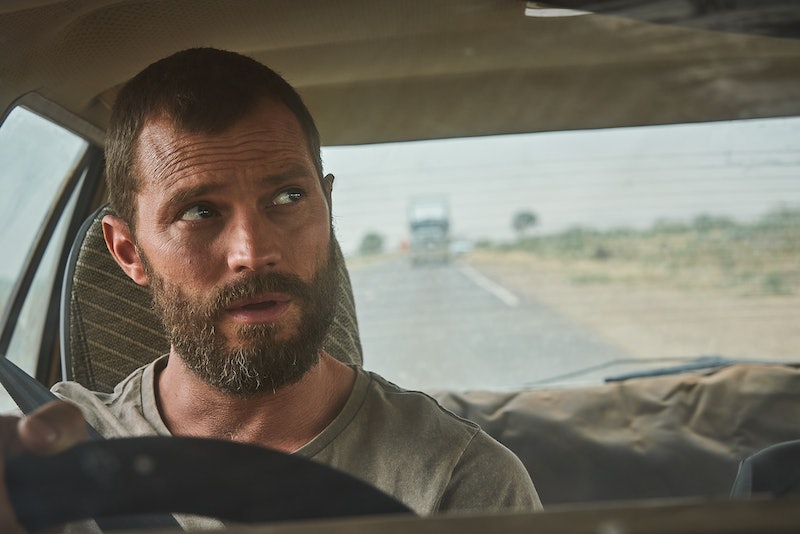 Landing on screens on New Year’s Day to see us through the dark days of January, BBC thriller The Tourist, starring Jamie Dornan is bound to be our next TV obsession. The story of Dornan’s character, known simply as “The Man”, is an off-beat black-comedy-action series that promises plenty of “shocking, funny and brutal turns”, but is The Tourist based on a true story?

Set against the glowing red heart Australian outback, the audience is thrown straight into the action from the start. Driving through the vast and dusty scenery, we’re introduced to The Man as he is being chased by a tanker truck in an attempt to drive him off the road. “An epic cat-and-mouse chase unfolds and the man later wakes in hospital, hurt, but somehow alive,” the BBC teases. “Except he has no idea who he is.”

Over the course of the six-part series, the nameless hero searches for clues that might give away who he really is whilst merciless figures from his past continue to pursue him. “Are you sure you really want to know who you are?” is one of the questions that rings through the show’s explosive trailer. Will he work out his past before it catches up with him, and possibly kills him?

The story of The Tourist comes from the acclaimed writers of The Missing, Baptiste and Liar Harry and Jack Williams, who own and run Two Brothers Pictures. Although there is a book called The Tourist by American author Olen Steinhauer, this six-part series is not based on it, and the thriller was written and created especially for the BBC, HBOMax and Stan.

The Man’s search for answers propels him through the vast and unforgiving outback. “At its heart, however, is a story of self-discovery with a ticking time-bomb underneath: as The Man starts to uncover the mystery of who he was, he’s also forced to ask who he is now — and fast,” adds the BBC. “Will he unlock the secrets of his identity before those who are trying to kill him catch up with him?”

More like this
Everything To Know About The 'Daisy Jones & The Six' TV Series
By Maxine Harrison and Brad Witter
ITV's 'Maternal' Was Inspired By A Very Simple – & Unanswerable – Question
By Maxine Harrison
The Song At The End Of 'The Last Of Us' Ep 1 Has A Deeper Meaning
By Sophie McEvoy
Helena Bonham Carter Doesn't Think 'The Crown' “Should Carry On"
By Sam Ramsden
Get The Very Best Of Bustle/UK
Sign up for Bustle UK's twice-weekly newsletter, featuring the latest must-watch TV, moving personal stories, and expert advice on the hottest viral buys.