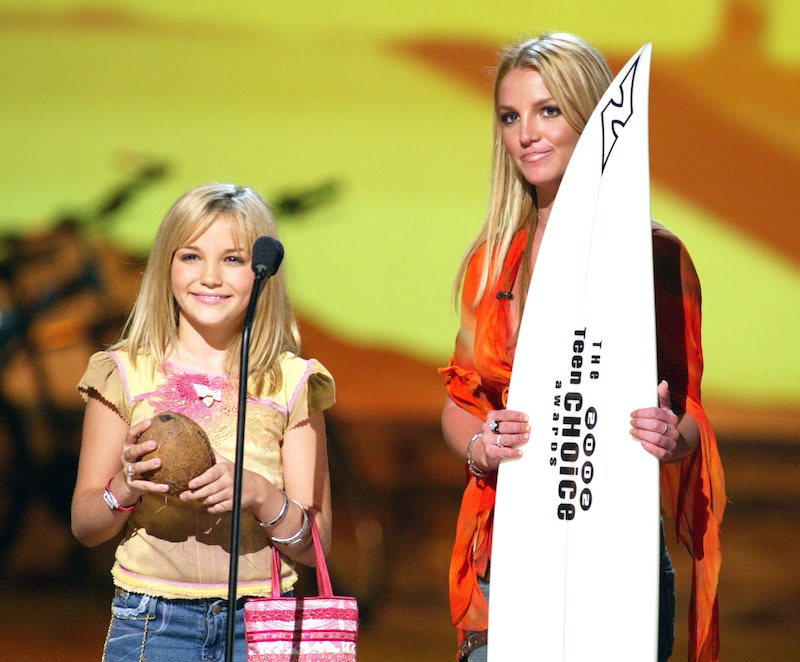 Britney Spears’ debut single “...Baby One More Time” was a cultural reset in the late ’90s. Not only did the song and its music video kick-start a new era of pop music that defined the early 2000s, it changed her family’s life. In a new interview on the Jan. 18 episode of the Call Her Daddy podcast, Britney’s sister, Jamie Lynn, recalled the 1998 release of “...Baby One More Time,” when she was just 7 years old, and the moment that made her realize how famous her sister was about to become.

Jamie Lynn revealed that a childhood friend first made her aware that “...Baby One More Time” was dominating radio airwaves. “First off, I was so confused,” she said. “I just remember I was on the trampoline at my friend’s house and someone said, ‘Your sister is a real singer and she’s famous,’ and I was like, ‘What do you mean?’ And they were like, ‘Her song is on the radio.’”

To better understand the situation, a young Jamie Lynn used Grammy winner Mariah Carey as a reference point. “I was like, ‘What do you mean singer? Like Mariah Carey singer?’” she asked. “I remember I said that and they were like, ‘Yes.’ I remember it was like the gates opened, like, ‘Ahhh … my sister did it. She did it and everything’s perfect.’ I was so happy and I thought it was the coolest thing. But in first grade, I just didn’t know. I just thought there’s famous people and then there’s us, and then someone just told me my sister’s like Mariah Carey. I couldn’t understand it.”

“...Baby One More Time” was just the first of many hits for Britney, but it left an immeasurable legacy. The song became Britney’s first of four Billboard No. 1 hits, thanks in part to its music video, where Spears pulls off compelling choreography and dons the iconic schoolgirl uniform that still gets worn as a Halloween costume more than two decades later. Jamie Lynn’s memoir Things I Should Have Said was even announced with the placeholder title I Must Confess, referencing the famous lyric from the song, though she denied that was ever the book’s true title.

Although she admitted that Britney’s initial fame made her feel like an “afterthought” at times, Jamie Lynn also said she was so grateful to share in her sister’s whirlwind experiences that came after “...Baby One More Time” topped the charts. “I was so proud of her and I know how hard she works and I admired her and it was so cool,” she said. “I got to witness the coolest things watching her live out her dream. So for me, it was just stay out of the way and just let this experience happen because this was the goal that everybody wanted and they got it, so I just need to not mess anything up for anybody.”

More like this
The Jonas Brothers' New Album Has A Very Meta Name
By Alyssa Lapid
Cruz Beckham Teased New Music With An Adorable Nod To Mom Victoria Beckham
By Stephanie Topacio Long
'Friends' Star Maggie Wheeler Offers Support To Matthew Perry After Reading His Memoir
By Alyssa Lapid
Mel B Thinks These Celebs Should Play Them In A Spice Girls Movie
By Alyssa Lapid
Get Even More From Bustle — Sign Up For The Newsletter
From hair trends to relationship advice, our daily newsletter has everything you need to sound like a person who’s on TikTok, even if you aren’t.