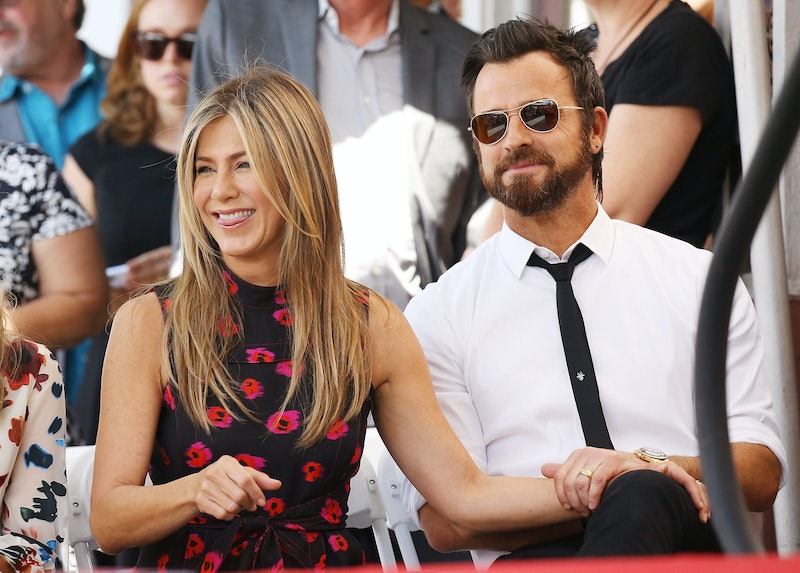 If anyone’s looking for an example of how to be a supportive ex, just look at Jennifer Aniston’s Instagram. Instead of attending the 2021 Primetime Emmy Awards, where she was nominated as a producer on HBO Max’s Friends: The Reunion special, the 52-year-old star posted a surprising Instagram Story about her ex-husband Justin Theroux and his beloved pitbull Kuma.

Theroux recently launched an Instagram account for Kuma to benefit the Austin Pets Alive shelter in Texas, and Aniston praised his charitable actions on her Instagram Story. “Love what these two are doing to help people who help pups who help people,” she wrote, reposting one of Theroux’s slideshow photos promoting Kuma’s account. “They helped save 60 dogs at @austinpetsalive yesterday.” The Friends star also shared a solo snapshot of Kuma, writing “THIS FACE!”

In response, Kuma shared both of Aniston’s Instagram Stories, writing “Thbaks [ant]ie Jen!!!” using an ant emoji to replace the word “aunt.” However, Kuma still doesn’t follow his aunt on the app, as the only account the pup does follow is Theroux’s.

Aniston and Theroux split at the end of 2017 after two years of marriage and nearly four years of dating before their 2015 wedding. The pair made their separation official in February 2018.

“We are two best friends who have decided to part ways as a couple, but look forward to continuing our cherished friendship,” they said in a joint statement in 2018. “Normally we would do this privately, but given that the gossip industry cannot resist an opportunity to speculate and invent, we wanted to convey the truth directly.”

Since their divorce, Theroux has said that he and Aniston still speak regularly and kept their promise to continue their friendship. “We don’t talk every day, but we call each other. We FaceTime. We text,” he told Esquire in April 2021. “Like it or not, we didn’t have that dramatic split, and we love each other. I’m sincere when I say that I cherish our friendship. We can not be together and still bring each other joy and friendship. It would be a loss if we weren’t in contact, for me personally.”

This isn’t the first time that the former couple has proven their friendship has remained strong. In February 2021, he posted a simple black-and-white snapshot of his ex to his Instagram Story to wish her a happy 52nd birthday. She returned the favor in August for his big 50th birthday, sharing a photo of Kuma and Theroux (in a suit) with the elated caption, “HAPPY BIRTHDAY JT,” plus an intimate shirtless snapshot. “Truly one a kind,” she captioned the latter photo. “LOVE YOU!”