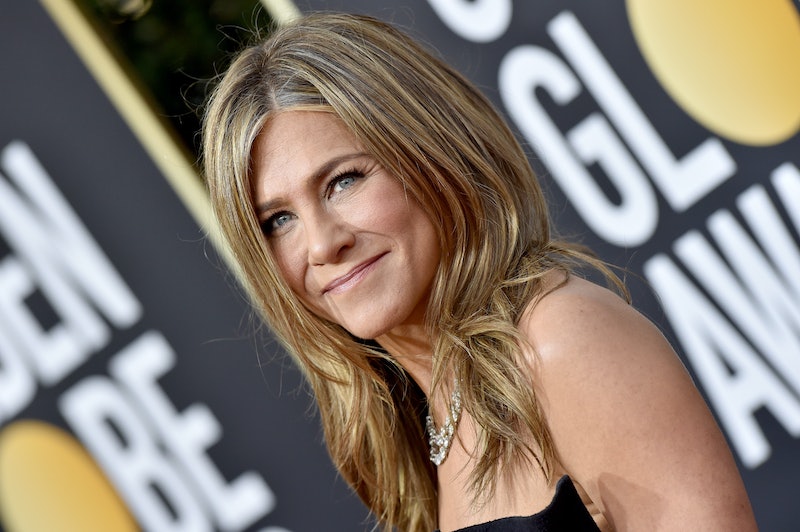 Who says you can’t be friends with your exes? Not Jennifer Aniston. On Tuesday, Dec. 7, the Friends star’s ex-husband Justin Theroux shared a photo of the former couple on his Instagram Stories. Turns out, the exes reunited for ABC’s live taping of Facts of Life, which Theroux produced and Aniston starred in. In the photo, the old flames appear friendlier than ever as they tightly hug fellow actor Ann Dowd.

“Anne-sandwich,” Theroux captioned the photo. Aniston, for her part, shared a series of images from the set on her Instagram feed and reflected on working with such incredible people on such a special project. “One for the memories,” she wrote. “Norman Lear. Jimmy Kimmel. Cast of my dreams. Facts of Life. Different Strokes. Blair. Lisa Whelchel. 🙌🏼❤️ #LiveInFrontOfAStudioAudience.”

Aniston and Theroux first started dating in 2011 and got engaged after a year together. In 2015, the then-couple tied the knot, but three years later they called it quits. Despite their split, the formerly married couple has been very open about remaining close friends. This past August, for example, the Morning Show star shared a photo of Theroux on her Instagram Stories in honor of his birthday.

“HAPPY BIRTHDAY JT," Aniston wrote on top of a photo of the actor looking dapper in a suit alongside his dog Kuma. On a less serious note, she also shared a shirtless photo of her ex, who was wearing nothing apart from a white visor. “Truly one of a kind,” she wrote. “Love you.” Back in February, Theroux reportedly posted for Aniston’s birthday as well. “Happy Birthday @jenniferaniston,” he wrote on a black-and-white photo of the We’re The Millers star. “❤️ you B.”

Theroux isn’t the only ex that Aniston is still friends with. Last year, she joined Brad Pitt and several other stars for a virtual live-read of Fast Times at Ridgemont High. When they signed on, Pitt greeted his ex with, “Hi, Aniston,” and the Friends actor replied, “Hi, Pitt. How you doing, honey?” Later, things heated up when Pitt voiced Brad Hamilton, (originally played by Judge Reinhold), and Aniston voiced Linda Barrett (Phoebe Cates) to reenact that swimsuit fantasy sequence.

Although the reenactment happened over Zoom, Aniston and Pitt’s chemistry was felt through computer screens everywhere. Even Julia Roberts couldn’t contain her excitement. The actor (who voiced Brad Hamilton’s sister, Stacy Hamilton, originally played by Jennifer Jason Leigh) smiled wide as the former couple read lines together. And during an appearance on Watch What Happens Live, Matthew McConaughey teased what it was like witnessing their “sexual tension.”

“Could I feel the heat through the screen of Brad? So palpable. Yeah, it was so palpable,” McConaughey joked. All laughs aside, McConaughey maintained that there was no real tension between the two. “No, I actually didn’t notice anything through the screen, but that made for a good topic the next day.” A source also confirmed to Us Weekly that there was “nothing romantic going on.” “They actually think it’s hysterical that fans are so obsessed with them getting back together,” the insider said.