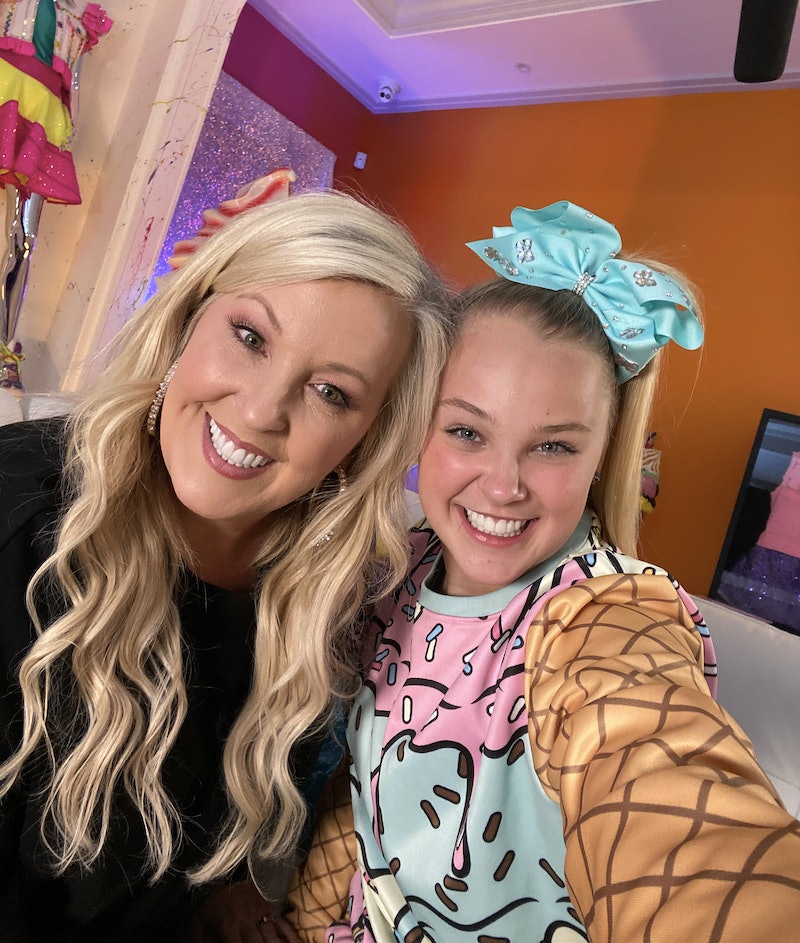 Before JoJo Siwa became a certified YouTube and Nickelodeon sensation — and newly deemed LGBTQ icon — she was a competitive dancer ushered into the world of television by her mom Jessalynn. JoJo competed on the second season of Abby Lee Miller’s show Abby’s Ultimate Dance Competition before enrolling into the Abby Lee Dance Company, with her and Jessalynn joining Season 5 of Dance Moms. After signing a contract with Nick, she emerged into a Gen Z superstar, with Jessalynn by her side every step of the way.

Now, the mother-daughter duo are calling the shots on their new Peacock series Siwas Dance Pop Revolution, where Jessalynn puts young contestants through a series of challenges, with choreography provided by JoJo, to form a new girl group. But what many fans don’t know is that JoJo’s mom has a dance-oriented past of her own.

“You know, Abby taught me a lot, and I took everything I learned from her, and then I made [Siwas’ Dance Pop Revolution] my own,” Jessalynn tells Bustle. “When I was on Dance Moms with her, I always thought, what would I do if these girls were mine, because I’ve been a dance teacher my whole life. So, it was different not being the teacher, and so I remember just sitting there thinking about what I would do, and then when we were writing up ideas for the show, they were just all flooding out on paper, and it was so awesome to be able to just do it all.”

Without her experience in the competitive world of dance, JoJo may have never realized her own passion and skills. Here’s everything you need to know about JoJo’s mom(ager) Jessalynn Siwa.

Before she joined Dance Moms with her daughter, Jessalynn was a dance teacher. She owned a dance studio in her hometown of Omaha, Neb., called Just Dance Co. before it shut down in 2016. “I have been involved in the dance business for the past 18 years, as a studio owner, instructor, choreographer, competition judge, and most recently a mom,” she wrote on the studio’s former website. She may have looked to Abby Lee Miller on Dance Moms, but she also has the expertise to mentor young dancers on her own show now.

Jessalynn Has More Than One Child

Jessalynn has been married to husband Tom Siwa for more than 20 years, as per an Instagram post from October 2019 that celebrated their 21st anniversary. Prior to the family’s fame, Tom worked as a chiropractor and owned a practice in Omaha. Aside from JoJo, they have one other child, 21-year-old Jayden. Thanks to the Siwas’ exposure, JoJo’s brother has become a social media influencer in his own right and is looking to parlay his platform into a career in real estate.

After taking JoJo to hundreds of dance rehearsals and competitions, Jessalynn could’ve taken a backseat when her daughter’s star grew bigger. Instead, she stayed on as JoJo’s manager, having a say in her appearances, performances, and business deals but leaving the creative decisions to JoJo. “Every day is just a learning experience,” she told USA Today in June 2018. “It’s a lot of work and a lot of commitment. If it’s what you love, you’ve gotta try.”

JoJo certainly made a big first impression when she first appeared on Dance Moms in part due to her bright oversized bows, which are now the key part of her signature look (well, until she started wearing them less in 2021 while trying out new looks as a standout Dancing with the Stars contestant). Jessalynn handmade all of JoJo’s bows when she was just an aspiring competitive dancer, as confirmed by Rolling Stone. Now, the bows are sold at Claire’s and have been parlayed into an entire JoJo empire, which now includes clothes, home decor, and basically everything else a Gen Z kid can persuade their parents to buy.