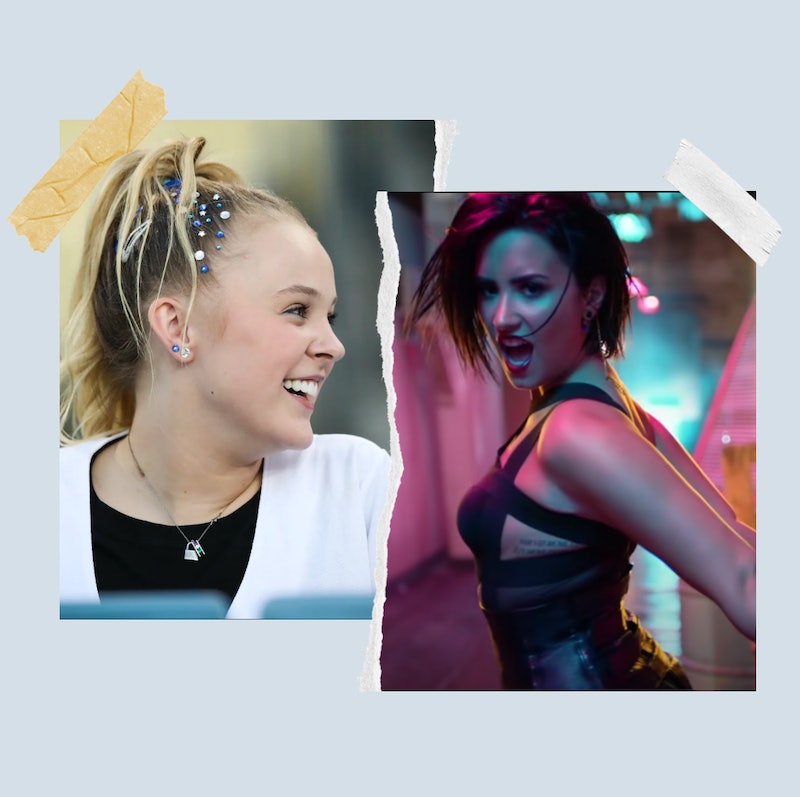 Demi Lovato’s “Cool For The Summer” is an undeniable bop, and the song was a hit on the charts when it came out in 2015, but to one super famous young woman, it has meant so much more than most pop songs. “I’ve been figuring out my ‘gay awakenings’ recently,” 18-year-old social media sensation JoJo Siwa told Lovato during an episode of the 4D with Demi Lovato podcast. “Do you remember your dancer — her name is Jojo Gomez?” After Lovato agreed, Siwa continued. “You did ‘Cool For The Summer’ together. I remember seeing that and being just a little too interested.”

Lovato ate up this revelation, smiling, clapping, and screaming as Siwa shared one of her earlier memories of realizing she was not straight (she now identifies now as pansexual), but that wasn’t the only compliment paid to the Grammy-nominated singer. Siwa added that her girlfriend Kylie revealed that one of her own gay awakenings was at a Lovato concert, meaning the “Dancing with the Devil” star played a role in helping both of the young lovers understand their sexualities. “Wow, I’m so happy I could play a role,” said Lovato, who came out as non-binary in 2021.

Siwa also said that perhaps her first major realization in the sexuality department happened watching another female superstar perform. “I think I realized that my very first gay awakening was Jenna Dewan’s performance on Lip Sync Battle,” Siwa divulged. The former Nickelodeon personality is referring to the episode when the actress and dancer appeared in semi-male drag to lip-sync to Ginuwine’s “Pony” in an overtly sexual showing. Her then-husband, Channing Tatum, also performed, tackling Beyoncé’s “Run The World (Girls)” in full Beyoncé drag.

Siwa made waves earlier this year when she publicly revealed she is a member of the LGBTQ+ community. At first, she said she wasn’t sure how to label her sexuality, which is completely understandable for someone who, at the time, wasn’t even 18 years old yet. Since then, she has clarified her stance in an interview with People, stating, “I would say that I am pansexual, because that’s how I have always been my whole life is just like, my human is my human," though she added that she does use the terms gay and queer.

Lovato recently launched her podcast and video series 4D With Demi Lovato, with all episodes available to stream or watch on YouTube. Siwa is the latest guest, following notable celebrities who have taken part in the program such as Drew Barrymore, Jameela Jamil, Chelsea Handler, Jojo, and Jane Fonda. Lovato came out as pansexual and fluid this past March, and then a few months later in May announced that they identify as non-binary, using they/them pronouns.