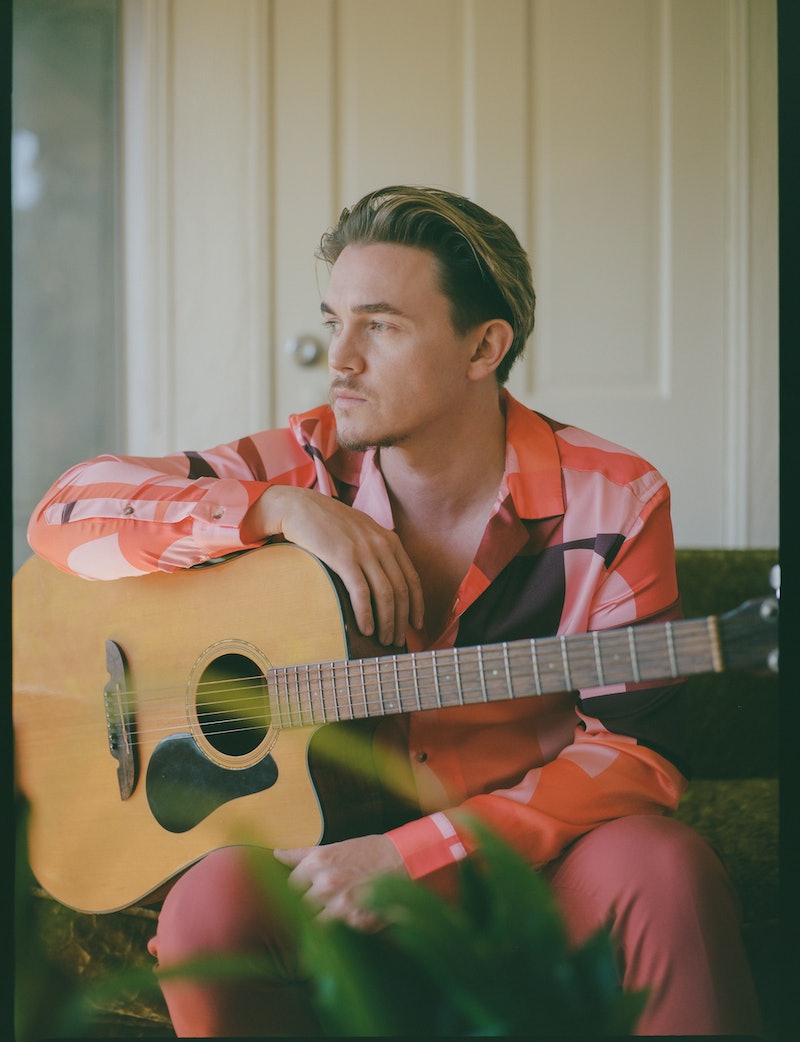 Jesse McCartney didn’t plan to take a seven-year break between albums, but in the end, it was for the best. “I think those gaps of time need to happen in an artist’s life in order to write something really creative and meaningful,” McCartney tells Bustle. After this lengthy hiatus — further lengthened after the pandemic led him to postpone the album’s release — he’s more ready than ever to have New Stage out in the world. “It’s been a long time in the making, but really it’s been a long time in the waiting.”

Fans first met McCartney in the ‘90s as an actor on All My Children and member of the boy band Dream Street, but it was 2004’s infectiously flirty “Beautiful Soul” that made him a full-fledged teen heartthrob. Following the success of his Billboard top 20 single, McCartney became a mainstay on Disney Channel, which served as a launching pad for later hits like “Leavin’” and “How Do You Sleep?” Now, on New Stage, the 34-year-old reflects on his days as a child star for the first time. What prompted the nostalgia? “I think it was the fact that I'm getting married,” McCartney laughs, citing his upcoming wedding to Katie Peterson, his girlfriend of nearly a decade. “I feel like more of a grown up than I ever have.”

New Stage is set for release on Oct. 8 — in the same month as his long-awaited, pandemic-postponed nuptials. The timing is kismet, as Peterson is also a main subject of the album’s 11 romantic, reflective songs. She’s especially present in the lyrics of his latest single “Party For Two,” a mid-tempo track that details the story of their engagement: McCartney had planned to pop the question during a trip to Napa Valley, California, but when the rock didn’t arrive in time, “I hid [it] in my golf bag in the garage for like six months, knowing maybe that'd be one place she wouldn't find the ring.”

Before he heads out on tour in November, McCartney plans to perform at his wedding — but don’t expect him to serenade Peterson with “Beautiful Soul.” “If I did that, I think it would be the fastest wedding and fastest divorce known to man,” he says. “Our families are well sick of that song at this point.”

Below, the singer-songwriter reflects on the process of making New Stage, the highs and lows of his career, and the pitfalls of childhood fame.

New Stage features heartfelt love songs written for your fiancée Katie Peterson, as well as reflections on your time in the entertainment industry. Did you intend to focus on those topics, or is that what came naturally?

When I did get back in the studio, I was in this very reflective place. Maybe it was because I hadn't made music in a while, and I had this sense of gratitude, especially in this relationship we’re in ... I’m not very good at being vulnerable, but music is the one place I’ve been able to allow myself to pull back the curtain a little bit. It feels like this was an opportunity for people to see the negative implications of being a big pop star when you’re a young child. That’s not to say I'm complaining through this album. It shows the spectrum of how [I] feel. I wanted to talk about that [and] meeting Katie, and it's made for a very honest album.

Knowing the love that fans have for your early hits like “Beautiful Soul,” do you ever feel held back from progressing as an artist?

A moment like “Beautiful Soul” is so rare, so odd, and such an anomaly — like getting struck by lightning. The fact that it happened at all is pretty incredible, and I’m very grateful for it. Songs like that become bigger than life, but you find ways to create new moments. Look, you can spend the rest of your life wondering, “Are you going to have another ‘Beautiful Soul’ moment?” But as an artist and a real writer, it’s about proving over and over again to people why “Beautiful Soul” was so special, and the songs that I write now still give people that feeling. The music I'm putting out now is reminiscent of those songs, reminiscent of “Beautiful Soul,” and I think it's going to strike the same chord, hopefully, that it did back then.

Transitioning from childhood fame to adult fame can be really difficult. You’ve enjoyed success in so many areas of the industry, but on “Yours” you talk about being “one album flop away from being done.” What was that low point like, and how were you able to persevere?

I think every artist at some point has an album that doesn't perform [well]. For me, that feeling came [around] 2010 when [Hollywood Records] was like, “We’re not going to put this record out.” I remember thinking, “What do you mean? What's going on?” They’re like, “We need more music, and it's getting too expensive,” and they basically sat on the album. It’s a terrible feeling, [but] it certainly wasn't my lowest point. I’ve gone through way more traumatic things in my life than an album not performing well. Once you realize you can have big failures like that, it humbles you, brings you back to earth, and makes you realize you’re not some mutant [or] unstoppable force. You're still going to have obstacles even through your biggest successes.

You started acting in All My Children and singing in Dream Street as a young kid in the late ‘90s. How do you look back on that period 20 years later?

It feels like such a whirlwind, but I don’t know that I’d change anything. It’s the classic saying, “Ignorance is bliss.” When you're unaware of all the business-y things that go on behind the scenes, you can relax and be a kid. All the grown-ups deal with that stuff, and you get up on stage and sing. Those days are really nostalgic and fun for me looking back, particularly being on All My Children and working with the cast of that show, who were so gracious to me and weren’t jaded. I don’t really have any negative memories of that experience. Dream Street too, we got to tour with Britney Spears [when] I was like 12 or 13. Justin Timberlake’s coming backstage, giving us a hug. All the things that you thought of when you were a young kid singing into your mirror with a comb, those things happened to me. I remember it being really fun, and then of course when I had to start learning the business side it was like, “Okay, this is why people get into lawsuits and stuff.” [Laughs.]

You reunited with Dream Street under unfortunate circumstances last year following the passing of Chris Trousdale. Would you ever be open to reuniting again on a larger scale, or is that chapter closed?

I never say no to anything. I love those guys. Those guys are a huge part of my childhood, and the timing would be not so great at this very moment because I’m so behind in my own personal work, but it’s a really nice thought.

I certainly wish that it was better circumstances that we got together on that Zoom call, but it was a really nice moment. We talk to each other now much more often. We have a group Dream Street text message thread with the four of us, and we promised each other that no matter what we would check in with each other much more often than we used to. But stay tuned! You never know.

Some of your early aughts peers have fallen down dark paths, but your public-facing career has remained pretty free of controversy. How did you manage to steer clear of that?

You have to know that if you make bad decisions, bad things are going to happen, especially if you’re in the public eye. When I was 21, TMZ covered a story of me having an after party in my Hollywood Hills house [with] all these celebrities — which was total B.S., that didn't even happen — and the neighbors got upset that we were drinking late [at] night. I think that was my worst [moment] — and I had an open alcoholic beverage at 18 or 19 in a club, and the club got shut down. And then my public display of acne at like 18 years old all over my face. I remember Perez Hilton making that a big thing.

Those are my worst moments I can remember, which aren’t so bad. But you’ve got to have a team of people that are really supportive and aren’t afraid to kick you in the ass and tell you, “You're being an asshole.” If you have a strong moral compass already, and then a team of people who also have that compass, you can get to the other side. It’s unfortunate that so many don’t, but also so many have. Look at people Miley [Cyrus], the Jonas Brothers, and Hilary Duff. It’s nice to see so many that have.