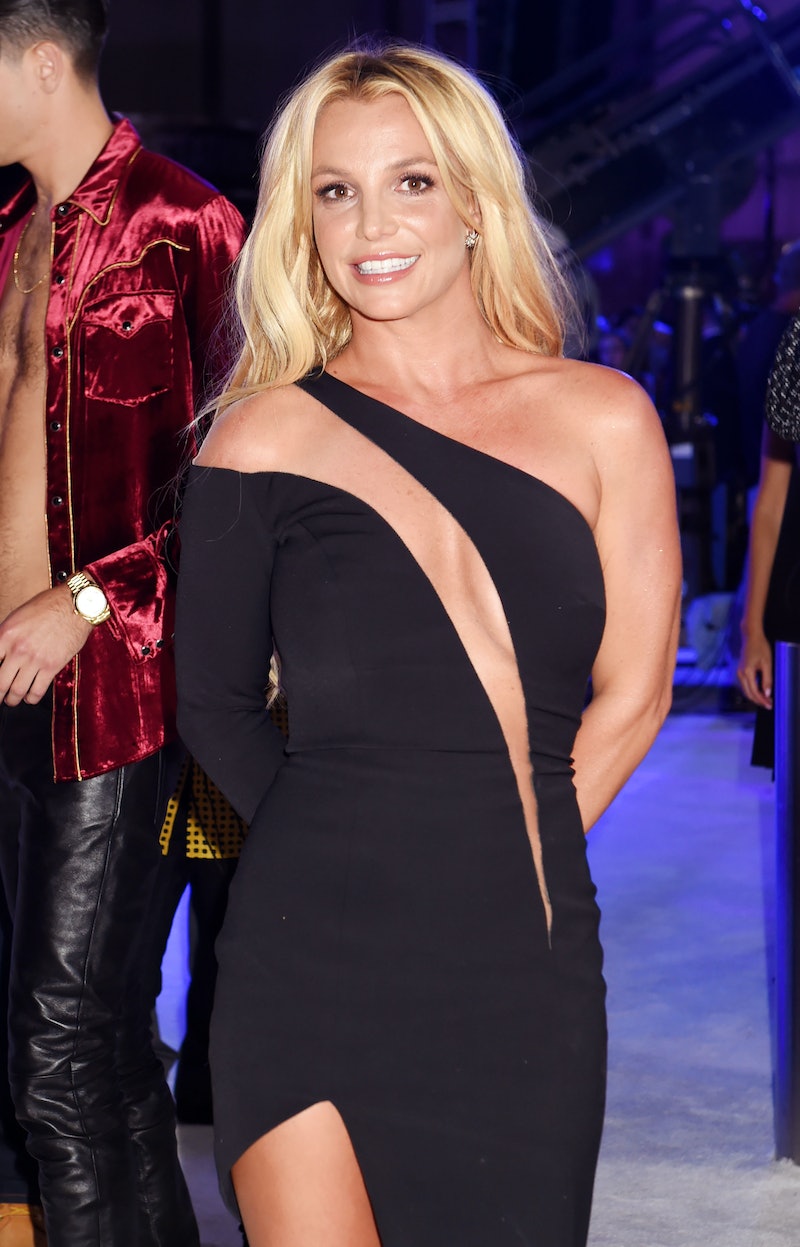 Britney Spears is setting the record straight about the topless photos she’s been posting on Instagram. “No guys ... I didn’t get a boob job in just a week ... nor am I pregnant,” she wrote alongside a carousel of revealing pictures on Monday, Aug. 16. In the photos, the pop star is wearing white bikini bottoms, red boots, and basically nothing else. So why has she decided to bear it all? According to Spears, going topless makes her feel lighter and more at ease — especially amid her ongoing conservatorship battle.

“Before I show you more pics of my body … I want you to understand my thoughts on exposing my skin,” Spears continued. She went on to explain that she thinks it’s “quite twisted” that women often feel like they can’t shed a layer of clothing when they’re hot like men do. “I’m not talking in a strip club or a performance,” she said. “Just on a practical scale of being in your car and realizing you’re wearing a stupid long sleeve shirt in the summer !!!!”

She continued, “The immediate reaction to any woman who does this after shedding a layer is DAMN I FEEL BETTER … therefore you think you look better !!!” The pop star went on to say that she’s removed layers at “a billion shows” and it always made her feel more confident, even if she didn’t look quite as good as she felt. “Sometimes I didn’t look so great,” she said. “TOO MANY TIMES and it’s embarrassing as f*ck but in my imagination it felt great !!!!”

After explaining that onstage performances made her feel insecure about her body, including the “big dimple” on her behind, the “Toxic” singer revealed why she’s exposing her body now more than ever. “It’s because I was born into this world naked and I honestly feel like the weight of the [world] has been on my shoulders and it’s made me view myself that way !!!!” she said. “I wanted to see myself in a lighter way … naked … like the way I was born.”

Spears’ next court hearing is scheduled for Sept. 29, so it makes sense that she wants to feel at ease amid such a stressful legal battle. At this point, it’s unclear what the future holds for the pop star and her conservatorship. Her father, Jamie Spears, agreed to step down as conservator last week after the pop star’s lawyer filed a petition to have him replaced earlier this month. The petition asked for Jamie to be replaced with Jason Rubin, a professional accountant, and the court is expected to decide next month.

Despite all of the conservatorship stress, Spears said that seeing photos of herself in her “purest form” reminds her that she’s not defined by the “pain” and “heavy burdens” she’s had to bear. “I am a woman …. a beautiful … sensitive woman,” she wrote, adding that the topless photos won’t continue forever. “No … I’m not going to do topless pics for the rest of my life cause that would get boring but it sure as hell helps when you need to be enlightened,” she explained.

Spears closed out her caption by thanking the fans who’ve supported the #FreeBritney movement even before she ever confirmed what was going on behind the scenes. “I will admit the FREE BRITNEY comments after I took my shirt off were actually really f*cking funny !!!” she wrote. “The Free Britney campaign started with all your amazing pink Free Britney shirts 3 years ago !!! There’s a way deeper meaning to the movement than you can ever imagine … my fans have always been so damn amazing and I love you all.”