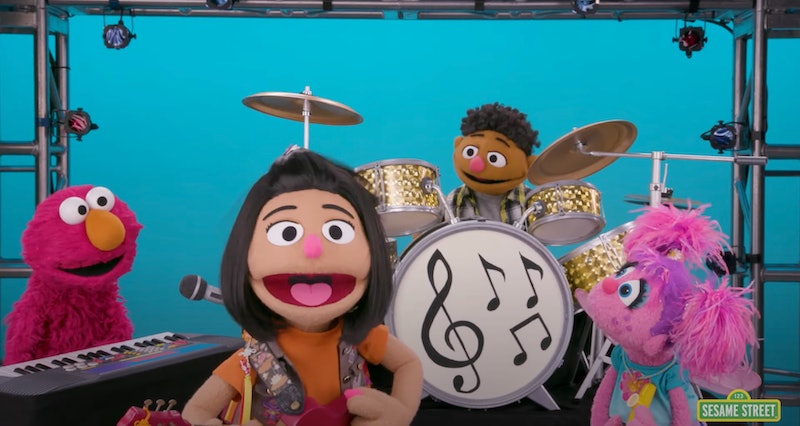 Sesame Street has long taught its young viewers to celebrate racial diversity, as Elmo, Big Bird, and the rest of the show’s Jim Hensen-created muppets have resided in multicultural New York City for a whopping 52 seasons. For most of the series’ run, the bulk of its diversity has come via human characters, but in the wake of George Floyd’s death and the Black Lives Matter movement, several African-American muppets have debuted on Sesame Street to show viewers how to have open discussions about race. In See Us Coming Together: A Sesame Street Special, set to air Thanksgiving Day on HBO Max and PBS, the iconic children’s series is welcoming its first Asian American muppet, 7-year-old Ji-Young.

The Korean-American muppet will appear in the special alongside celebrities including Simu Liu, Padma Lakshmi, and Naomi Osaka before becoming a main character in the show’s forthcoming Season 53. Speaking to fellow Sesame Street regular Ernie in a recent clip shared via the Associated Press, Ji-Young explained the meaning behind her name, which includes a kismet connection to the series: “So, in Korean traditionally the two syllables they each mean something different and Ji means, like, smart or wise. And Young means, like, brave or courageous and strong. But we were looking it up and guess what? Ji also means sesame.”

Kathleen Kim is the puppeteer behind Ji-Young, and like the muppet, she also identifies as Korean-American. The 41-year-old began practicing puppetry in her 30s and entered a Sesame Street workshop in 2014, which turned into a mentorship and official job on the show just one year later. While she’s excited to craft the series’ first Asian American muppet, the task is certainly daunting. “I feel like I have a lot of weight that maybe I’m putting on myself to teach these lessons and to be this representative that I did not have as a kid,” she said to AP, noting that fellow puppeteer Leslie Carrara-Rudolph, aka Abby Cadabby on Sesame Street, told her it’s more about the message than who’s behind the muppets.

Ji-Young’s addition to the show was partially inspired by the troubling social and political events of 2020. Following the explosion of the Black Lives Matter movement and rise in anti-Asian hate crimes, Sesame Street’s nonprofit organization Sesame Workshop created task forces to comb through the show’s previous content and address its history with diversity. The analysis led to the launch of Coming Together, “a multi-year initiative addressing how to talk to children about race, ethnicity, and culture,” per AP.

Sesame Workshop’s efforts sparked the creation of several Black muppets, including Wesley Walker, his father Elijah, and Tamir, one of the first Sesame Street characters to discuss racism. “When we knew we were going to be doing this work that was going to focus on the Asian and Pacific Islanders experience, we of course knew we needed to create an Asian muppet as well,” said Kay Wilson Stallings, executive vice-president of Creative and Production for the nonprofit.

While crafting Ji-Young, part of Kim’s focus was to make sure she wasn’t portrayed as “generically pan-Asian.” She detailed, “Because that’s something that all Asian Americans have experienced. They kind of want to lump us into this monolithic ‘Asian.’ So it was very important that she was specifically Korean American, not just, like, generically Korean, but she was born here.”

Ji-Young was created in part to counter the sharp rise in anti-Asian rhetoric since the onset of the COVID-19 pandemic, which makes the character even more important to Kim. “I remember, like, the Atlanta shootings and how terrifying that was for me,” said the puppeteer. “My one hope, obviously, is to actually help teach what racism is, help teach kids to be able to recognize it and then speak out against it. But then my other hope for Ji-Young is that she just normalizes seeing different kinds of looking kids on TV.”

Viewers can expect to see Ji-Young across all types of Sesame Street content, Stallings told the AP, not just segments related to racial diversity. The character is expected to explore all of her interests, which include playing electric guitar, skateboarding, and cooking Korean dishes including tteokbokki, aka chewy rice cakes, with her halmoni (Korean for “grandmother”).

More like this
'Friends' Star Maggie Wheeler Offers Support To Matthew Perry After Reading His Memoir
By Alyssa Lapid
'That '90s Show' Star Callie Haverda Got Advice From Mila Kunis & Ashton Kutcher
By Brad Witter
Here’s Why Danny Masterson’s Hyde Isn’t In 'That '90s Show'
By Brad Witter
The 'Scream 6' Trailer Shows Off Hayden Panettiere's Return & Ghostface In NYC
By Jack Irvin and Jake Viswanath
Get Even More From Bustle — Sign Up For The Newsletter
From hair trends to relationship advice, our daily newsletter has everything you need to sound like a person who’s on TikTok, even if you aren’t.