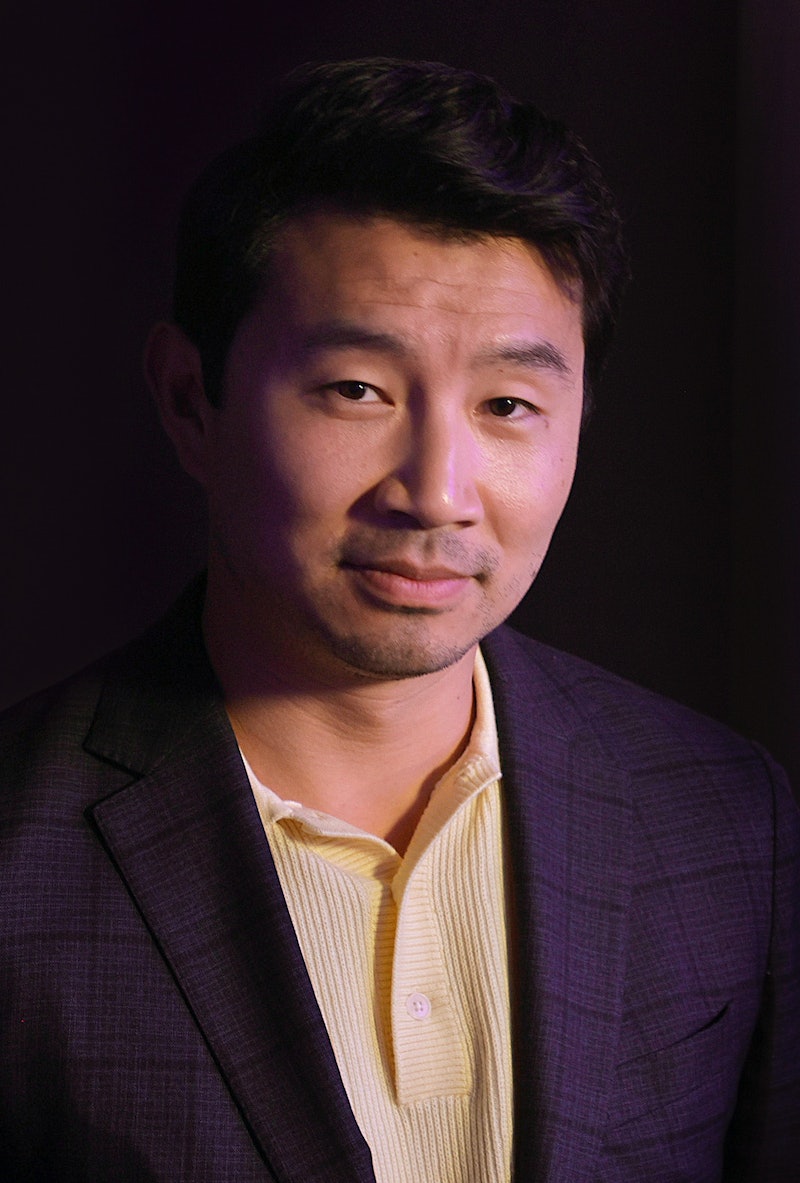 Simu Liu is unapologetically Asian. The actor, born in Harbin, China, and raised in Mississauga, Canada, tells Bustle he’s “never felt the need to apologize for my Asianness or who I was.” The best advice he’s ever received is “To see being Asian as a superpower rather than a hindrance.”

As the star of Shang-Chi and the Legend of the Ten Rings — Marvel Studios’ first-ever Asian-led film — the 32-year-old brings that ethos to the big screen. Directed by Destin Daniel Cretton and starring the likes of Awkafina, Michelle Yeoh, and Tony Leung, Shang-Chi is a two-hour long, action-packed argument for Asianness as a superpower. The film reclaims Shang-Chi from his origins in Marvel’s notoriously racist, ‘70s-era comics, pointedly swapping Fu Manchu, a Yellow Peril archetype, for Leung’s more complex villain, Wenwu. It’s the kind of representation that Liu’s been fighting for since 2014, when he first tweeted at Marvel asking for an Asian hero.

As a martial arts film, Shang-Chi builds on the work of genre legends Bruce Lee, Jackie Chan, and others. “We have little homages to Jackie,” Liu says. “We felt his DNA everyday.” Action designers and stunt coordinators who had worked with Chan brought their expertise to the production, crafting some of Marvel’s most dynamic combat sequences. But Shang-Chi also flips the script, dispensing with the “outsider” narrative seen in many of Chan’s Hollywood movies. Rather than a sole Asian “foreigner,” Shang-Chi boasts “a multitude of Asian heroes and heroines, each with their own backstories and dimensionality,” Liu says.

Liu himself helped shape those heroes and heroines, ensuring the story was “told through an Asian lens.” He savored the chance to offer input, as he hasn’t always had such inclusive collaborators. Prior to Shang-Chi, Liu’s most notable role was on the acclaimed Canadian sitcom Kim’s Convenience; after the show’s abrupt cancellation in March, the cast spoke out about its racist storylines and lack of off-screen diversity, alleging that the creators refused to accept the cast’s creative input. It served as a reminder of how far the entertainment industry has to go — and that onscreen representation is just one piece of the puzzle.

But Liu isn’t waiting for the world to catch up. Regardless of what strides (or backslides) the industry makes, he’ll still serenade his fans in Chinese, joke about dining at Din Tai Fung ahead of photoshoots, and share his family’s immigrant story. (Look out for his forthcoming memoir, We Were Dreamers, for more on the latter.)

Below, Liu speaks about joining the Marvel Cinematic Universe, his hopes for a Marvel musical, and the importance of telling Asian stories.

There’s a good chance that this movie could change the course of your career. Who from the Marvel world advised and supported you as you took on this role?

I had a beautiful conversation just the other day with Mr. Chris Pratt, who of course plays Star-Lord in Guardians of the Galaxy. He was one of the guys who, from very early on, reached out and was like, “You’re gonna go through a crazy ride, let me know if you need anything,” and was just so generous with his time. You could tell that he was really, really thoughtful with what he was telling me. I really, really appreciated it and I won’t forget it, and will certainly look to pay it forward if [and] when I do get the chance.

Henry Golding recently spoke up about the "toxic" haters who have criticized him and you leading up to Shang-Chi. Have you and Henry spoken directly about it?

I think we’ve been very vocally supportive of each other. I know I feel his support, and every time we have trailer releases and drops, I always hear from him, and he always lets me know how much he’s looking out and how much he supports [the project] and me, and it means the world.

It’s so incredibly important for our community to uplift each other and we’ll definitely continue to do that. I hope we do get the chance to sit down at some point and have a longer conversation. Until that time happens, and I’m sure it will, I’ll be very, very firmly in his corner.

I hear you can sing. Any chance you’ll show up on a Marvel soundtrack sometime soon? Maybe Guardians of the Galaxy Vol. 3?

I would love to be in a musical set in the MCU. I’m pitching it right now in this Bustle article. It needs to happen and I think we should get Kevin [Feige] on it and I would love to sing as much as I possibly can.

Which MCU character would you be most excited to see Shang-Chi share a scene with?

There’s a very specific comic run that I really love and it’s where Shang-Chi teaches Spiderman how to fight without his Spidey Sense. I would really love to see that adapted, if possible, but that decision is beyond my pay grade.

All I can say is, I look forward to any interaction with anybody else in the MCU. If I should be so lucky, I would be absolutely down for it.

The Shang-Chi comics from the 1970s are notorious for their racist undertones — particularly the villain Fu Manchu, who was designed in 1912 as an archetypal Yellow Peril villain. What’s it like to be a part of a movie that’s reappropriating those stories and characters to channel a message of Asian pride?

It feels incredible to be bringing the character of Shang-Chi into the modern era in 2021, and telling the story through the lens of Asian American writers and directors. I think we really do have an all new character on our hands. The only things that we imported from the comics were his name, the fact that he’s an incredible fighter, and this sort of complicated history with a father figure. But then of course we went and made an entirely new father figure in Wenwu and crafted an all-new origin story that’s refreshing and so empowering for all the right reasons.

It really just speaks to the importance of not only having that representation and the diversity on the screen, but also behind it. Our story is the way it is because it was told through an Asian lens, and that’s why it is such a celebration of Asianness, of our culture, of our language, and so much. Regardless of whether or not you’re a part of our community, I think it’s something that you can watch and feel like you’re participating in.

How did working on the Shang-Chi set compare to your time on Kim’s Convenience?

I was surprised by how valued my voice was. I think I had an expectation going in that I was going to be a tiny cog in a massive machine, and as the new kid and the actor I was just gonna be told to sit there, look that way, say this line, and that couldn’t be further from the truth. From day one, I was asked to provide feedback on my character’s journey, on other characters’ journeys, on the storylines and the script in general. And I really, really appreciated that.

I feel like we have incredible leaders on the project, whether with Destin [Daniel Cretton], or even with Kevin and Jonathan [Schwartz], of course neither of whom are Asian, but have the humility and the wisdom to defer to people who have those lived experiences. I think knowing when to do so is such an incredible sign of leadership and poise, and also part of what makes our movie as good as it is.

You’re writing a book about your parents’ lives. What do you hope readers will take away from your family’s story?

I hope that they’ll take away the duality of [my parents’ and my] journeys. Growing up, I really felt that there was nothing that I could relate to my parents on; I felt like they came from an entirely different world than I did. And then I got older, and I got to a point where I was taking a huge risk [going into the entertainment industry], and about to step into the unknown. And I just remember it clicking in my mind, how uncertain my parents must’ve felt immigrating from China to Canada. It’s a story about finding reconciliation with your family, and coming full circle with questions about identity and who you are.

What’s the best advice you’ve received about working in Hollywood as an Asian actor?

The best advice that I received was to figure out a way to see being Asian as a superpower rather than a hindrance, rather than something that you have to apologize for, and I’ve never felt the need to apologize for my Asianness or who I was in general. I think it can be tempting to think of it that way though, because the fact of the matter is we don’t get the breadth of opportunity that maybe other people would have.

But what I got out of it was, if you just learn to lean into your community and to not be afraid to speak out, I think you give people a reason to galvanize behind you and to support you and what you stand for. It’s something that I’ve held close to me throughout Kim’s Convenience, where I first learned to hone that voice and develop it, and use it, and it’s followed me through to Shang-Chi. I continue to be a very active advocate in the community and I continue to speak out in any way that I can. I look forward to being joined by many others.