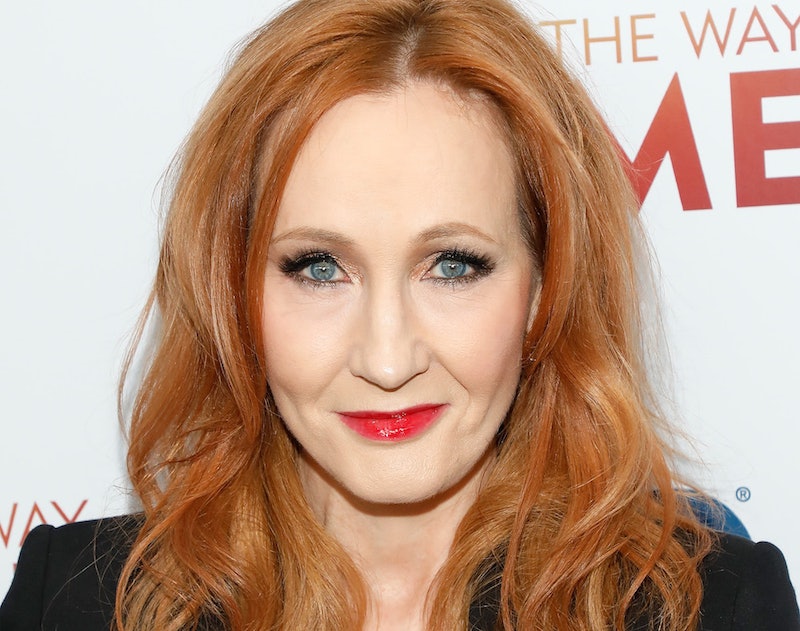 In a statement on Thursday, Aug. 27, Harry Potter author J.K. Rowling announced that she would return a human rights award previously bestowed upon her by the Robert F. Kennedy Human Rights organization after the nonprofit criticized her views on transgender identity. In her statement, she claimed that the organization “incorrectly implied” that she “was transphobic” and “responsible for harm to trans people" in her viral tweets from June. Soon after her decision, a viral hashtag was born: #IStandWithJKRowling. But, despite initially being created to defend the British author, #IStandWithJKRowling was soon taken over by K-Pop fans critical of her stance on transgender rights.

In June, Rowling made headlines for tweeting, among other things, that "If sex isn't real, the lived reality of women globally is erased." Two months later, in August, Kerry Kennedy, human rights activist and daughter of Robert F. Kennedy, shared a statement on the Robert F. Kennedy Human Rights website that expressed dismay over Rowling’s tweets, saying that Rowling has created a “narrative that diminishes the identity of trans and nonbinary people, undermining the validity and integrity of the entire transgender community,” per Variety.

Rowling responded on her own website on Thursday, Aug. 27, maintaining that she feels she has “no option but to return” the Ripple of Hope Award, which she received in December 2019. Citing “the very serious conflict of views between myself” and the organization, the author added that “no award or honor, no matter my admiration for the person for whom it was named, means so much to me that I would forfeit the right to follow the dictates of my own conscience.” And thus, #IStandWithJKRowling was born.

Some fans were quick to come to her defense, but others were not having it. After many called on K-Pop Twitter to “do their thing” — a reference to their ability to take over hashtags in large numbers (see: the #WhiteLivesMatter hashtag in a show of Black Lives Matter solidarity) — #IStandWithJKRowling was quickly overrun. Devoted BTS and BLACKPINK fans, among many others, immediately responded, flooding the hashtag with clips of performances and their faves to advocate for the transgender community, with one Twitter user reiterating that “trans lives matter.”

K-Pop stans aren't the only ones taking issue with the author's controversial statements on transgender rights. Harry Potter actors Daniel Radcliffe, Emma Watson, and Katie Leung all released their own statements against Rowling’s initial tweets. “Transgender women are women," Radcliffe wrote via The Trevor Project website, directly contradicting Rowling. "Any statement to the contrary erases the identity and dignity of transgender people and goes against all advice given by professional health care associations who have far more expertise on this subject matter than either Jo or I.”

More like this
There’s A Brand New 'Drag Race' Spin-Off In The Works
By Sam Ramsden
Pro Footballer Zander Murray Is "Blown Away" By Support After Coming Out
By Sam Ramsden
Bimini, Tia Kofi & More React To Cherry Valentine’s Death
By Catharina Cheung
Stormzy Made A Passionate Speech About The Importance Of Diversity
By El Hunt
Get Even More From Bustle — Sign Up For The Newsletter