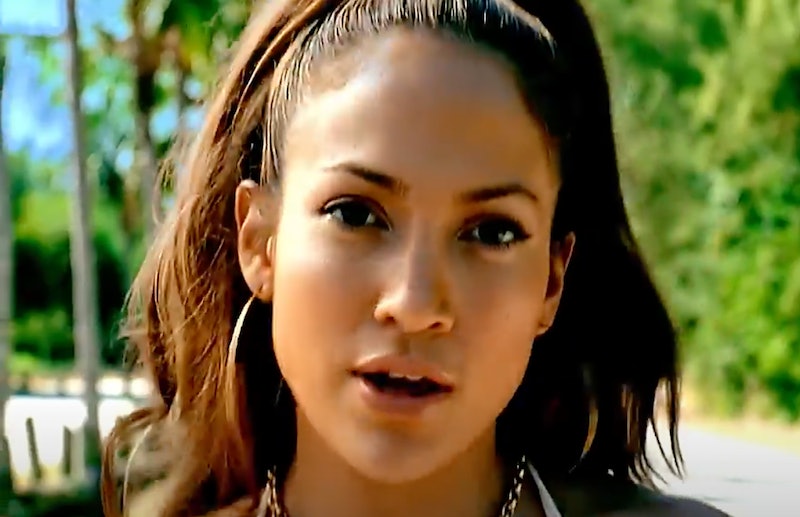 It may have been 20 years since the release of Jennifer Lopez's sophomore album J.Lo, but the singer hasn't aged a day. For proof, just look at J.Lo's Instagram, where she recently recreated her iconic "Love Don't Cost A Thing" music video. In the footage, shared on Sunday, Jan. 24, the pop star struts down a beach and takes off her clothes and accessories one by one, much like in the original video.

"Had a little fun at a recent shoot," she revealed in the caption. She did make one small change, though. In the new clip, she's wearing a vintage J.Lo t-shirt, which she also begins to take off — before she cuts the camera off. In a separate post, the singer looked back at her past two decades in the entertainment industry and thanked the fans who have stuck with her since the beginning.

"As I reflect on the fact that it's the #JLo20thAnniversary, I just wanted to say thank you to all of you for being with me, loving me, and supporting me through all the ups and downs," she wrote. "Thank you so much for all the love over the past 20 years!! I love you so much!!" She ended her post with the hashtag #SameGirl, reminding fans that she's forever "Jenny From the Block."

The original music video was released at a significant point in J.Lo's career and love life. "Love Don't Cost A Thing" became a top 10 hit on the Billboard Hot 100 and inspired the teen rom-com of the same name, starring Nick Cannon and Christina Milian. She also ended up marrying one of the video's backup dancers, Cris Judd, in September 2001 before splitting nine months later. Now she's at another high point in her personal and professional life; just last week, she performed at Joe Biden's inauguration with her new fiancé Alex Rodriguez by her side.

Of course, latest version of her "Love Don't Cost A Thing" video isn't the first time she's taken a nostalgic trip back to the early 2000s. In September 2019, during a segment called "The History of Music Video Dancing" on The Tonight Show, J.Lo and host Jimmy Fallon recreated the choreography to "Waiting For Tonight," complete with the neon green lasers. With any luck, "Jenny From the Block" will be next.

More like this
Britney Spears Shares & Deletes Photos Of Justin Timberlake From 22 Years Ago
By Jake Viswanath
Victoria Beckham’s Spice Girls Audition Was V. Theatrical
By Sam Ramsden
Twitter Can’t Believe The Madonna Biopic Is Scrapped & Fans Have A Solution
By Alyssa Lapid
Hilary Duff's Husband Matthew Koma Has Her Name Tattooed On His Butt
By Jake Viswanath and Stephanie Downs
Get Even More From Bustle — Sign Up For The Newsletter