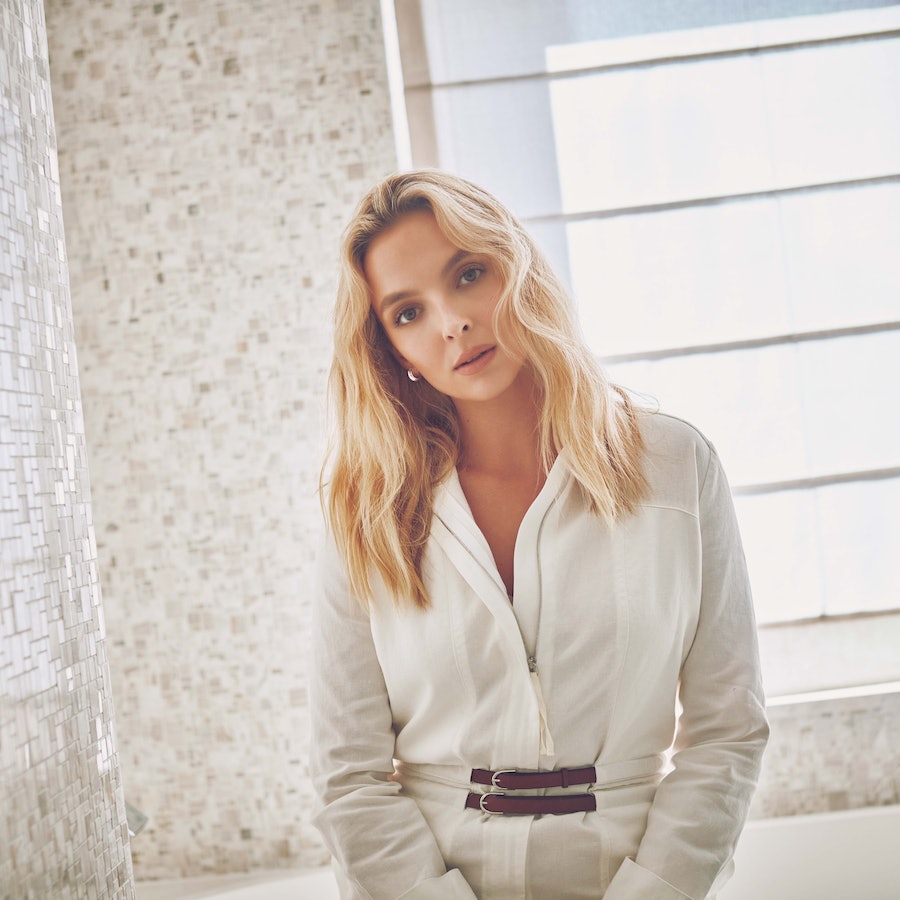 Jodie Comer was 12 when she experienced a trauma as universal as puberty itself: social rejection. She and her pals had signed up to perform a PG version of Chicago’s “Cell Block Tango” in the school talent show. But when young Jodie missed rehearsals for a family vacation, the troupe dumped her over MSN Messenger.

“I went up to my mom and was like... you know when you cry, and you lose your breath?” Comer asks me. Of course, I do. We all do. Luckily, Jodie’s mom saved the day, suggesting she instead perform a monologue Comer had learned from attending the Liverpool Drama Festival. From there, the Hollywood script writes itself: Jodie smashed it, her impressed drama teacher suggested she audition for a local radio play, and just like that, little Jodie Comer from Liverpool was a professional actor.

Fifteen years later, 28-year-old Comer is an Emmy and BAFTA-winning performer, starring opposite Ryan Reynolds in box office smash Free Guy. She’s nabbed roles in not one but two upcoming films from Alien director Ridley Scott, including The Last Duel, the first film written by Matt Damon and Ben Affleck since Good Will Hunting. She’s gaining experience behind the camera, and earned her first producing credit for this year’s TV movie Help. Childhood ordeals are known for “building character,” but Comer’s helped her build a career.

Still, it took time to work her way up. After the radio play, Comer would score guest roles on popular British TV shows like Casualty, Law & Order: UK, and Doctor Foster, and star in buzzy miniseries The White Princess before finally nabbing her breakthrough role as Killing Eve’s Villanelle, an alluring Russian assassin who slips between foreign accents as effortlessly as she changes designer frocks. Comer was just wrapping Season 2 when she received the script for Free Guy.

The film — about Guy (Reynolds), who discovers he’s a background character in a video game — calls to mind The Truman Show, with a splash of Last Action Hero, plus some one-ups, weapon wheels, and health bars for good measure. Comer is charming as Millie, an American video game developer determined to prove that her stolen code was used in Guy’s game. “She has a real sense of self, a sense of what's right, what is deserved,” Comer says of Millie. “She's got a good sense of humor, which I appreciate.” Free Guy is a feel-good movie premiering at a moment when people want to feel good, and Comer sees the value in that. “Ultimately, I just want people to go and I want them to have fun,” Comer says. “I dare them not to.”

It stands in stark contrast to her upcoming historical drama The Last Duel, which will hit theaters in October. Comer plays a medieval Frenchwoman who claims to have been raped by her husband’s friend; when her husband challenges this friend to a trial by combat, the stage is set for the country’s last-ever legally sanctioned duel. It’s the first of her two projects with Ridley Scott (the other, Kitbag, will see her play Josephine Bonaparte opposite Joaquin Phoenix’s Napoleon), and she describes the 83-year-old director as meticulous on set. “He has four or five cameras rolling the entire time,” says Comer, who starred alongside Damon, Affleck, and Adam Driver. “Everyone is on their A game.”

This year looks to be an inflection point in Comer’s career — a graduation from TV to the big screen, which she’s sharing with some of the biggest names in Hollywood. “It's funny because that’s a very outside looking in perspective,” she says. “I've always wanted to do films, and I’ve done so much television that I talked myself into this thought of, ‘Oh, well, maybe there are TV actresses and film actresses, and I'm not going to be a film actress.’ And of course that was my own insecurity. It’s so lovely to be now making this transition.” But now that she’s finally making the jump, she realizes that screen size doesn’t matter. “I love television. For me, it’s all about the material and the people who you're working with.”

Right now, Comer’s working with some pretty great people, filming the fourth and final season of Killing Eve with the likes of Sandra Oh and Fiona Shaw. “I probably won't ever get a character like [Villanelle] again,” she says. Comer is grateful, because it’s only looking backwards that a successful acting career seems smooth like an arc, with job leading to job leading to job; as it’s happening, there are no guarantees for future success. “As a result [of Killing Eve], people then took me seriously, I felt, which was lovely,” she says. Now that she has achieved that success, Comer’s excited for the show to go out on a high. “I hope that people will be satisfied,” is all she offers by way of spoilers.

It’s been a while now since Jodie Comer was the girl crying to her mom about getting excluded from the talent show, but she still considers herself a softie. “It will be a sad day when we wrap,” she says of Killing Eve. The show was the first thing she talked about in her first meeting with Ridley Scott, and what she was known for when she was sent the Free Guy script. And Killing Eve can be traced back to the BBC radio play, which maybe only happened because her friends were mean to her, as 12-year-olds can often be. Still, I had to know what happened to those preteens.

“Well, one of them was my cousin,” Comer says, laughing. “And one of them is still one of my bestest friends.” She now knows what she couldn’t have when she was young and hyperventilating, when getting cut from the performance was the end of the world: “It was meant to be.”