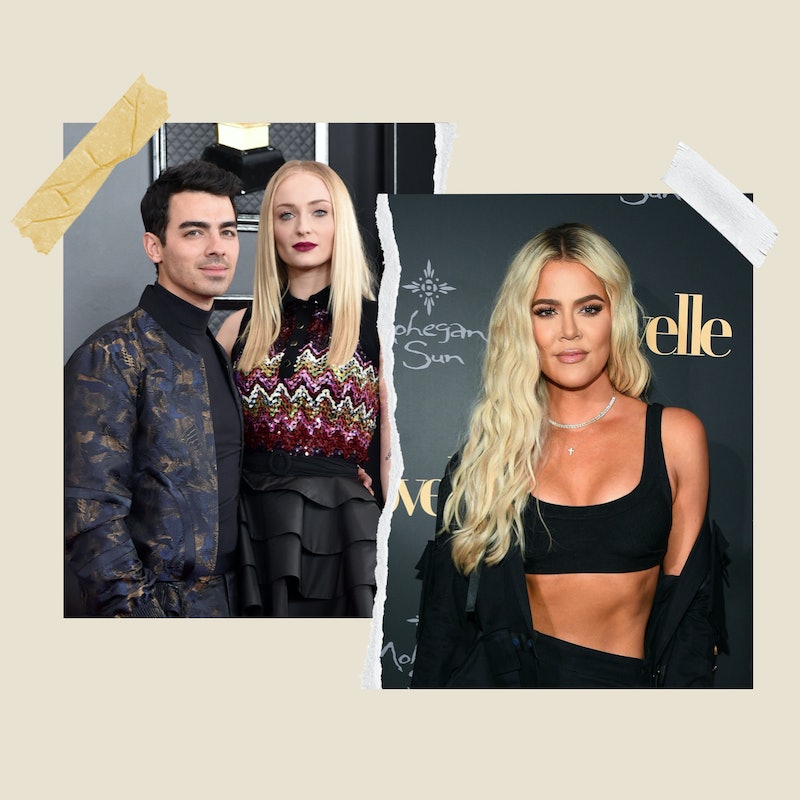 Joe Jonas and Sophie Turner impersonated the Kardashians again, and Khloé Kardashian is so here for it. On Saturday, Jan. 22, the musician shared a short clip on Instagram of him and the Game of Thrones star acting out a funny scene from Keeping Up With the Kardashians. In it, Turner plays a very distracted Kim Kardashian and Jonas plays Khloé, who just returned from a trip to Australia.

“You are, why?” Turner replies as she types away on her phone.

“Because I just came back from Australia...” Joe responds.

After seeing the clip, the Good American founder dropped three laughing emojis in the comments. But it’s not surprising that the couple nailed their impression. The Jonas family has a long history of impersonating the Kardashians on social media. In January 2020, for example, Joe reenacted a fight between Kim, Khloe, and Kourtney Kardashian with his brothers.

In the video, which quickly went viral, Joe shouted Kim’s iconic line, “Don’t be f*cking rude,” while continuously hitting Nick Jonas over the shoulder with a purse. The video was praised by both Khloé and Kim. In October of that same year, Joe and Sophie recreated a different scene between Kourtney and Kylie Jenner.

“I just finished a whole cup of 42 and I’m about to go for my second one. Kourtney, what the f*ck are you on?” Turner lip-synced to Jenner’s voiceover. But Joe — ahem, Kourtney — was totally lost. “I don’t know what’s going on, so I’m just appreciating my bread,” he responds while eating frozen yogurt.

The Kardashians aren’t the only celebrities that the Jonas Brothers spoof on the internet. In December, the band recreated the iconic “Joe Byron” TikTok trend from inside the White House. “Are you vaccinated?” Nick lip-syncs to the original audio, which was reportedly taken from a Sidetalk video. “Who’s the president, man? Who’s the president?” “Byron!” his brothers respond.

The clip also includes a cameo from President Biden himself. “Uh, did we get it?” Kevin Jonas asks. “We got it,” Biden confirms. Now that they’ve impersonated the Kardashians and got a TikTok with the president, it’s unclear who the Jonas Brothers will spoof next. What we do know is that they are very active on TikTok and Instagram, so it shouldn’t be long before they drop their next viral video.

More like this
Khloé Kardashian Writes Touching Instagram Tribute To Tristan Thompson’s Mother
By Alyssa Lapid
Olivia Rodrigo Manifested Finally Meeting Demi Lovato
By Jake Viswanath
Paris Hilton & Carter Reum’s Relationship Timeline Includes A 2023 Grammys Date Night
By Bustle Editors
The History Of Taylor Swift's "All Too Well" & What The Lyrics Actually Mean
By Jake Viswanath
Get Even More From Bustle — Sign Up For The Newsletter
From hair trends to relationship advice, our daily newsletter has everything you need to sound like a person who’s on TikTok, even if you aren’t.