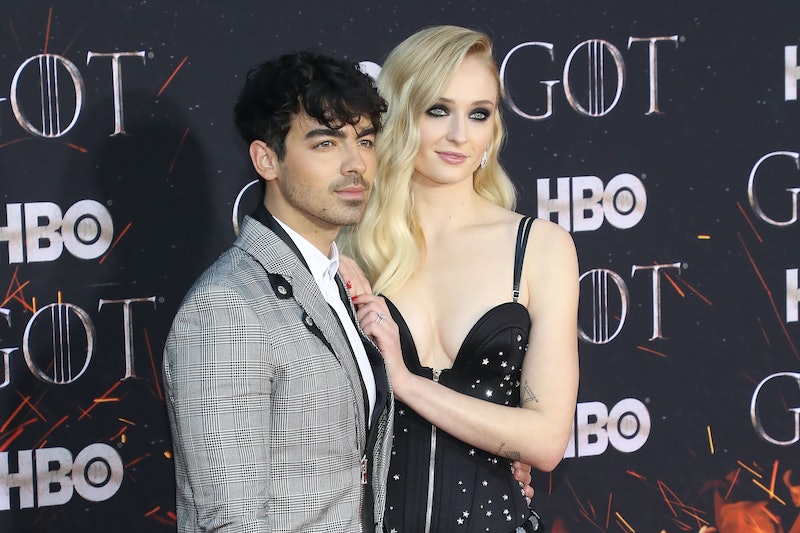 Joe and Sophie's new baby is definitely a part of House Stark. The couple recently welcomed their first child together, and Joe Jonas and Sophie Turner's baby name reportedly has a Game of Thrones connection — appropriately enough, to House Stark itself. On July 27, TMZ reported that Jonas and Turner welcomed a baby girl named Willa on July 22, and fans of the HBO fantasy saga quickly noticed that there are actually two characters with the same name who have appeared on the show in the past. (A representative for the couple confirmed the birth of their child, but did not comment on the baby name. Bustle reached out to Turner and Jonas, but did not receive any immediate response.)

The first Willa in Game of Thrones was a young Wildling girl who appeared in two episodes of Season 5; she is part of the host of Wildlings who relocate to Castle Black in order to support the Night's Watch in the fight against the White Walkers. In Season 8, the show introduced a second character named Willa, this time a servant who works at Winterfell, the home of House Stark. (There is also a character named Wylla Manderly who appears in A Dance with Dragons, though it is spelled differently.) It's unclear whether or not Jonas and Turner were aware of the Game of Thrones connection when they chose the name, but both have spoken about how the show played a key role in the early days of their relationship.

Neither Jonas nor Turner have publicly commented on the birth of their daughter, though a representative for the couple told People that they were "delighted" about their new addition. Meanwhile, a source told Entertainment Tonight that while the pair are "obsessed" with their baby girl, and claimed that they wanted to enjoy their time as new parents outside of the spotlight. "[They] can't stop gloating about their new addition," the source claimed. "The couple is taking time to enjoy this special moment and have only shared the news and updates with family and friends. With the pandemic Joe and Sophie have been very cautious about who is around them and their little girl."

Jonas and Turner began dating in 2016, and announced their engagement about a year later. They tied the knot twice in 2019: first, in an impromptu ceremony in Las Vegas after the Billboard Music Awards in May, and then in June, in a much larger celebration with their family and friends in France. Reports of Turner's pregnancy first surfaced in February 2020, although neither the actor nor Jonas have ever publicly confirmed the happy news.

The couple might live in the spotlight, but their desire to keep their family life private isn't too surprising. In late May 2019, Turner admitted that if it was up to her, their Vegas wedding never would have been public knowledge. "It would have been better if no one had known, but I actually think it was funny" she told PorterEDIT at the time. "I think at some point I would have had to stop saying 'fiancé,' but yes, I would have kept it a secret. Marriage is a private thing between two people and I think that's how it should always be. It's not about the dress, it's not about the food. It's about being husband and wife, and being dedicated to each other forever."

While she didn't talk about her pregnancy during an April 2020 appearance on Conan, Turner did reveal that she was enjoying spending time at home with Jonas during the ongoing coronavirus pandemic. "I'm an introvert. I'm a homebody. If I could stay at home all day I would," she explained. "Everything seems to be working out in my favor here because Joe's a real social butterfly, so I struggle to lock him down and have him just spend time with me. It's like prison for him, but it's great for me."

More like this
What Jen Shah's Delayed Sentencing Could Mean For The 'RHOSLC' Season 3 Reunion
By Brad Witter and Jake Viswanath
The First Trailer For 'That '90s Show' Includes So Many Nods To The Original Series
By Jack Irvin, Alyssa Lapid and Grace Wehniainen
Matt Smith Proves He's Daddy Daemon In This Viral 'House Of The Dragon' Video
By Marina Watts
'Bridgerton' S3 Teases Exciting Social Season For Penelope Featherington
By Bustle
Get Even More From Bustle — Sign Up For The Newsletter