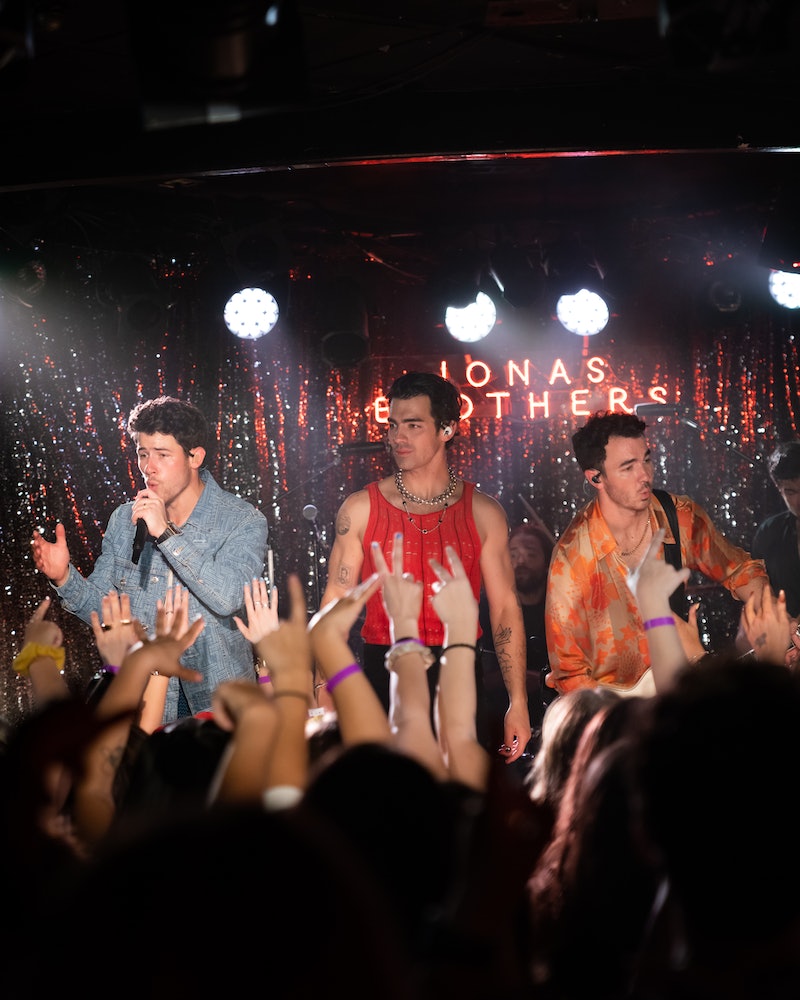 In the Jonas Brothers’ new docuseries, Moments Between the Moments, Nick says his mantra for 2021 was “a year of firsts.” It’s a fitting sentiment as he, Joe, and Kevin participated in a first-of-its-kind scathing Netflix Family Roast, launched their first snack brand with Rob’s Popcorn, and played some of their biggest U.S. shows to date. “We were so excited to be one of the first few artists out touring again through everything we went through in the last couple years,” exclaims Kevin. Looking forward to 2022, the brothers tell Bustle they hope to release their ever-forthcoming first memoir, Blood, want to perform in new locations, and ponder which former Disney Channel act they’d tour with next.

Streaming on Messenger Watch Together, Moments Between the Moments offers fans a behind-the-scenes look into the band’s Remember This Tour, which wrapped its North American leg in October, through candid backstage footage. Next year, the tour continues with several Mexico shows scheduled for February — but Nick hopes it won’t end there. “One thing I'm hoping is a “first” in 2022 is a chance for us to get over to Asia,” he says. “We haven't really ever, as the Brothers, been able to tour there, so being able to see our fans there would be incredible.”

Spanning major stadium venues, including Boston’s Fenway Park, the Remember This Tour proves the brothers have come a long way since opening for the likes of Miley Cyrus, Aly & AJ, and The Cheetah Girls during their mid-2000s Disney Channel days. Still, they haven’t abandoned their roots. If the band had to bring one ex-Disney act on the road for their next tour, Joe says it’d “be cool" to reunite with The Cheetah Girls. While Nick agrees, his personal dream double bill is slightly more meta: “Whatever our band was called in Camp Rock. Us and Connect Three [would be] dynamite.”

Along with their forthcoming tour dates, the Jonas Brothers plan to provide listeners with new music ASAP, as it’s been more than two years since their last album, Happiness Begins. “That’s definitely part of our focus for the next year, to get back in the studio and really start working on whatever’s next,” says Joe. Beyond new tunes, the brothers know fans are hoping 2022 will bring the long-awaited release of their first memoir, Blood, which has faced several delays since its 2019 announcement. “We’re definitely trying to get [Blood] out sooner than later,” he details. “It’s a lot to write a book about yourself, the years we've spent touring and traveling together, and also doing this as a family. But there's a lot of great stories that we're ready to share, so hopefully soon.”

New episodes of Moments Between the Moments premiere Thursdays on Messenger Watch Together. The series concludes on Dec. 30 with a concert special from the Jonas Brothers.

More like this
'That '90s Show' Star Callie Haverda Got Advice From Mila Kunis & Ashton Kutcher
By Brad Witter
Britney Spears Shares & Deletes Photos Of Justin Timberlake From 22 Years Ago
By Jake Viswanath
'Friends' Star Maggie Wheeler Offers Support To Matthew Perry After Reading His Memoir
By Alyssa Lapid
At 28, Debra Jo Rupp Was Living A Much Different '70s Show
By Grace Wehniainen
Get Even More From Bustle — Sign Up For The Newsletter
From hair trends to relationship advice, our daily newsletter has everything you need to sound like a person who’s on TikTok, even if you aren’t.