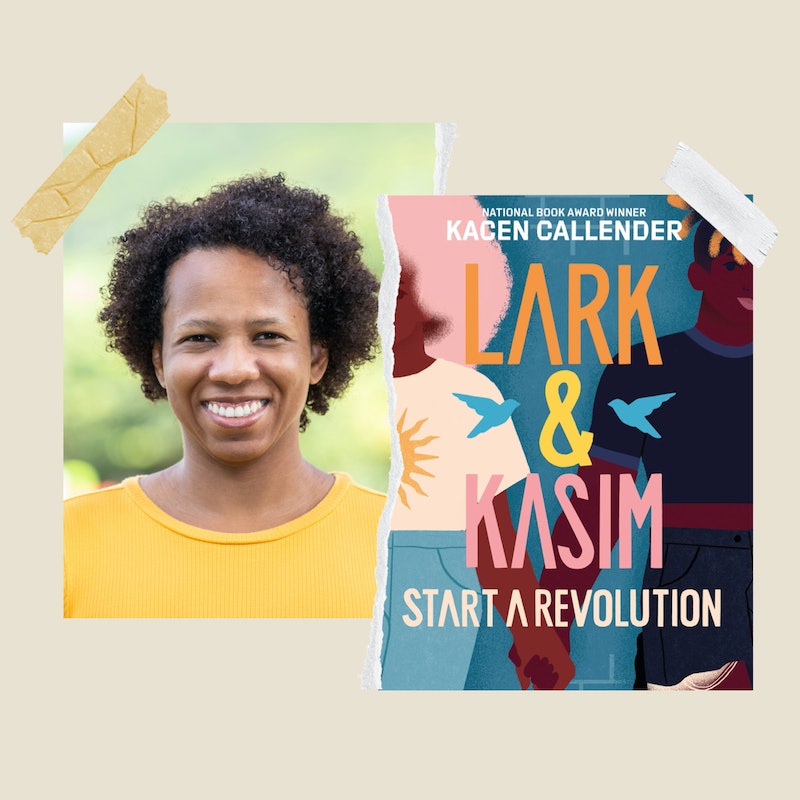 In the four short years since Kacen Callender published their first book, Hurricane Child, they’ve carved out a writing career that would take most a lifetime to build, releasing a whopping six novels for children, teens, and adults, earning a Stonewall Book Award, National Book Award, and Lambda Literary Award in the process. And they’re only getting started. In 2022 alone, they’re set to publish three new books, including the YA novel Lark & Kasim Start a Revolution. Ahead of its Sept. 27 release, Bustle has an exclusive first look at Lark & Kasim’s cover (check out the design below).

Callender began writing to create more stories about people like them, and in Lark & Kasim, they’ve done just that. “I have so many marginalized identities, I don't necessarily get to see myself as a whole,” the author tells Bustle. “Lark is the first time where I've put in every single one of my identities — the Black, queer, non-binary, and neurodivergent person.” In the novel, Lark voices a thought that Callender themself has had: “I feel like I have to collect all of my identities as if they’re all Pokémon. I have to catch them all.’’

Also like Callender, Lark dreams of becoming an author. Certain that Twitter fame will land them a book deal, the 17-year-old sets out to gain 50,000 followers. But Lark’s efforts are nearly derailed when Kasim accidentally tweets from their account — confessing his love for an unnamed crush, no less. Fearing they’ll be canceled over the mixup, Lark takes credit, and starts dating their own secret crush, Eli, in the process. Little does Lark know that Kasim’s posts were about them all along. “From the beginning, it’s kind of a joke that Lark just doesn’t get it — and even the cover’s showing that: ‘Y’all are in love, come on,’” Callender says.

Another thing Lark doesn’t get? What it really takes to launch a writing career. “I actually really hope that young writers will read this and realize that you don't even need a Twitter profile in order to get published,” they say. Social media, Callender warns, can easily hurt rather than help a budding author’s career. “Forget what you think everyone else wants and really write what it is that excites you the most,” they say. “Really trying to [write] what you think your readers are expecting is the biggest block to the story of your heart.” In other words: Trust yourself, and the rest will follow.

Below, Kacen Callender discusses writing about marginalized identities, getting personal in their work, and finding hope in Gen Z.

Do you think this is your most personal novel to date?

I don't like to say that any one of my books is my most personal because they all have such significant pieces of me. I feel like they're all equally personal in that sense. But this one does have the most personal identity pieces [compared to] the others.

Have you ever gotten pushback from someone in publishing about including characters with multiple marginalized identities in your work?

Do young writers need to be cautious about revealing whether they're non-binary, neurodivergent, or polyamorous?

I think it's all going to be very personal. I don't want to give advice for every single individual. I've known authors who, within the online community, can talk about their identities without any fear for their safety, but then in their personal communities, they can't say what their identities are. Sometimes I feel like there are implications that to come out, you have to be brave. Like you're a brave person if you come out or you talk about your identities, and that's never really sat well with me because there are people who are really just trying to survive.

I think also about the Isabel Fall situation that happened a couple of years ago. People are moving away from using #OwnVoices because of this idea that someone's identity isn't any of your business just because they're writing something for you.

Absolutely. That is actually a part of Lark & Kasim. They don't touch specifically on Isabel Fall, but [on] this pushback about who is allowed to be valid even within our own queer spaces. Kasim at one point says, “Someone says, I'm not really trans because I'm not physically transitioning.” Kasim is also trans. I think that that's something that we could all be more aware of and trying to figure out internally: Why do we push back on people who share our identities and try to invalidate them and decide that we are more worthy than they are?

Do you feel you’ve been targeted in that way before?

As a queer and trans person, not a soul has messed with me in that way. I don't know if it's because I've made it so clear that no one has any right to invalidate anyone else that people know not to try that one with me. But I have unfortunately seen it happen. I've heard even one friend tell another friend that they're not really queer because they haven't had a difficult coming out experience.

I think that part of the point that the story makes and part of the point I'm trying to make right now also is it's all connected. How we try to shame others and try to invalidate others is really such a reflection about how we feel about ourselves. If we're not validating ourselves or loving ourselves the way that we could be, I think that that starts to fall into other ways of us invalidating or trying to harm others, because we don't feel that great about ourselves. That's my personal take. I think if we all worked on ourselves and our own personal growth, we would probably come to a place where we don't do this anymore.

Do you feel like the market has changed a lot from when you first began reading YA?

Yeah. I mean, it changes with every generation, I think, as every generation evolves. Gen Z is the most badass generation so far and I love writing for them. I mean, I guess maybe it isn't fair to generalize because of my experience. Every person's single experience as a teen will also be very different. But when I look at Gen Z in general, who will most likely fight back and fight against people bullying others for their identities, for example. When I look back on my time as a teen — where I was getting bullied and no one else was doing what Gen Z would be doing now — it just feels like the evolution definitely makes the readers a bit different from what I was reading and what other teens were reading in my day.

I saw something recently — someone from Gen Z posting about coming out narratives, saying “Why do we even need this?” And every millennial queer person who saw it was like, “Our experiences have been so different from theirs.”

I mean, I don't want to generalize because there are still, I think, teenagers today who probably do still need that coming out narrative, because they're in a community that doesn't let other types of stories be shown or [let them] feel completely validated. But it also really excites me that a teenager today is asking, “Why do we need this coming out narrative?” It just shows how much has changed.

Kacen Callender’s Lark & Kasim Start a Revolution is out on Sept. 27 and is now available for pre-order.