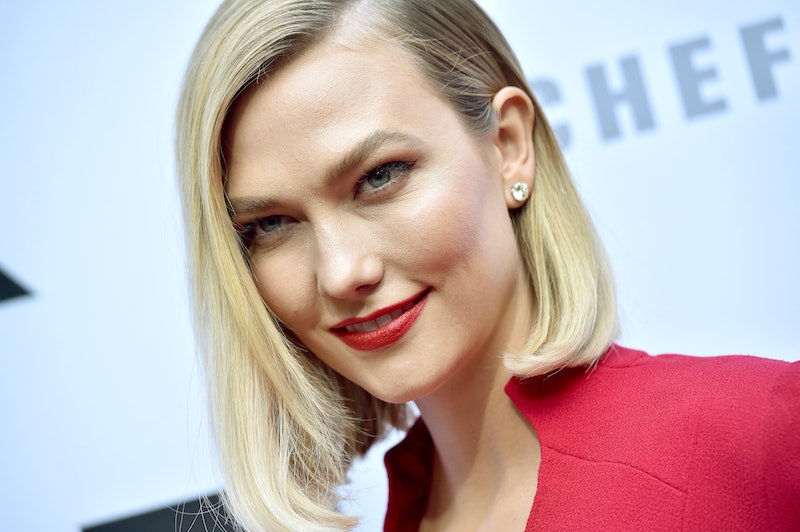 Americans looked on in fear and pain yesterday, Jan. 7, as pro-Trump insurrectionists stormed the U.S. Capitol while lawmakers were verifying the electoral votes from the 2020 election. Dan Levy, Shonda Rhimes, Olivia Munn, and a long list of other celebrities began to express their opposition to the attack on our democracy online. And later in the evening, model Karlie Kloss — wife to Joshua Kushner, the brother of Trump's advisor and son-in-law Jared Kushner — also condemned the rioting on Twitter.

"Accepting the results of a legitimate democratic election is patriotic. Refusing to do so and inciting violence is anti-American," Kloss wrote. When a social media user told the model in a since-deleted tweet to "tell [that] to your sister in law and brother [in] law," the model fired back. "I tried," she wrote. While she didn't offer up any more details about what, exactly, she tried to tell them, Kloss' comment makes it clear that she has very different political views than her in-laws.

Though Kloss and Joshua, who are expecting their first child together, began dating back in 2012, she began facing online criticism following the 2016 presidential election due to her refusal to comment on her relationship to Ivanka Trump and publicly disavow her and Jared. (Kloss did, however, endorse Hillary Clinton in 2016.) "At the end of the day, I've had to make decisions based on my own moral compass — forget what the public says, forget social media," she told Vogue in September 2018, shortly after announcing her engagement.

Kloss continued, "I've chosen to be with the man I love despite the complications," Kloss added. "It's frustrating, to be honest, that the spotlight is always shifted away from my career toward my relationship. I don’t think the same happens in conversations with men." The model also hinted that she and her husband share the same political beliefs, telling the magazine that "Josh and I share a lot of the same liberal values that guide our lives and the things we stand for."

She echoed those sentiments a year later in an interview with British Vogue, where she admitted that the scrutiny of her relationship has been "hard. But I choose to focus on the values that I share with my husband, and those are the same liberal values that I was raised with and that have guided me throughout my life."

In Jan. 2020, shortly after a Project Runway contestant's barb about her attending "dinner with the Kushners" went viral, Kloss clarified her political beliefs on Watch What Happens Live. "I'm sure I'm not the only person in this country who does not necessarily agree with their family on politics. I voted as a Democrat in 2016, and I plan to do the same in 2020," she told Andy Cohen at the time. "I'm very passionate about different issues, women's reproductive health, and I'm very involved with Planned Parenthood."

Kloss also noted that she was with Joshua for years before his family was ever involved in politics. "I met my man in 2012. I was 19 years old," the model explained. "It was 2012, it was a different world. My man and I have been through a lot together. I'm so proud that he's my partner. It's not been easy but it's worth it. I would make that same decision a million times again."