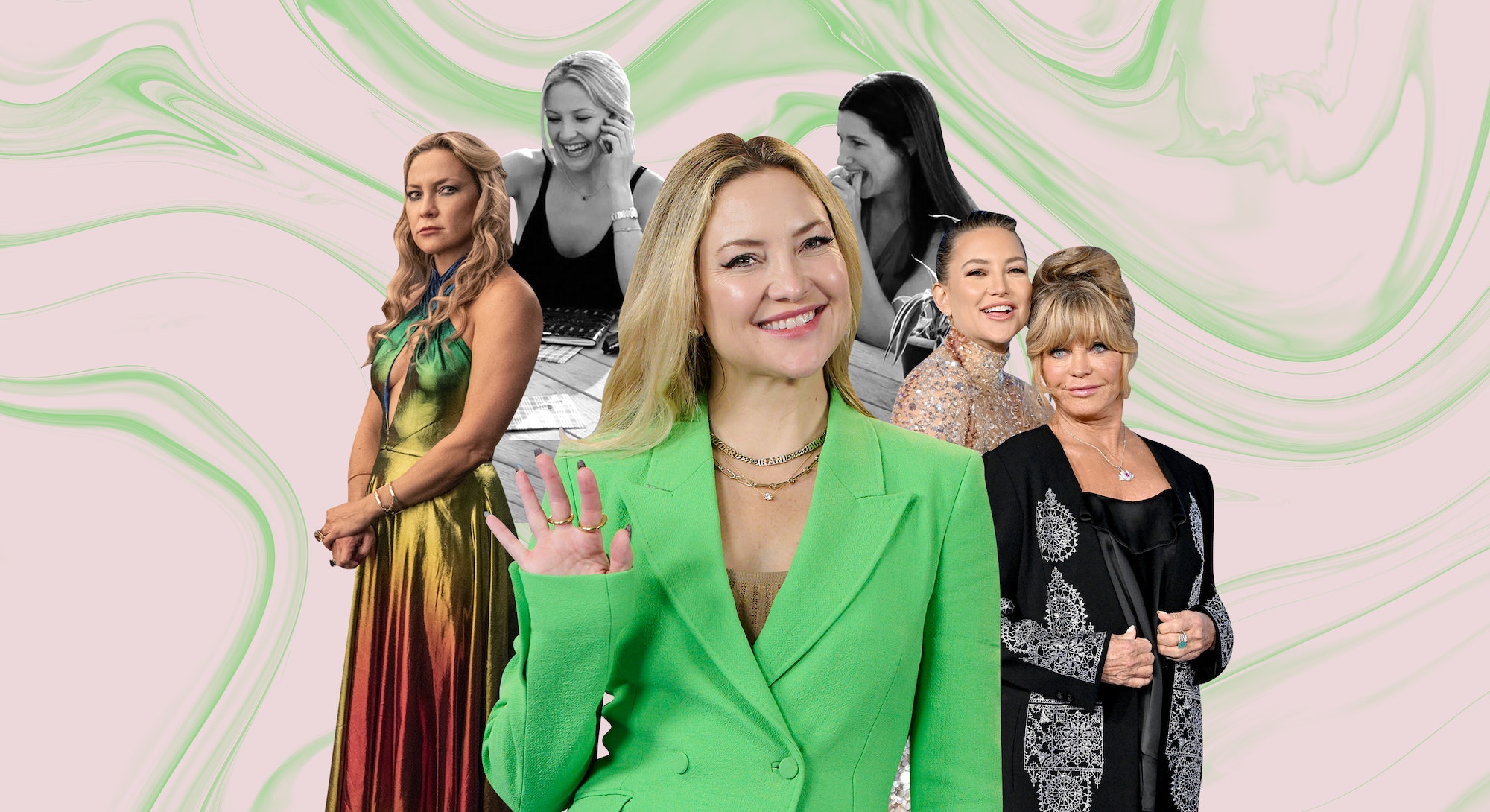 Kate Hudson isn’t sure how to greet me when I enter the hotel room for our interview. Do we shake hands? Bump elbows? The etiquette mandates are unclear in a post-lockdown world. Instead, upon my suggestion, we settle for a polite head nod as we exchange pleasantries. I’m immediately struck by how different this introduction is compared to Hudson’s colourful on-screen entrance in Glass Onion: A Knives Out Mystery. Although we meet Birdie Jay in the midst of the lockdown restrictions, she’s practically revived Studio 54 by hosting an alcohol-fuelled party. “They’re all in my pod,” she says, brushing aside any concern. It’s a telling sign of things to come, as the audience soon realises just how disconnected from reality Birdie, and many of her friends, have come to be.

A standalone sequel to the critically-acclaimed 2019 film Knives Out, this second instalment sees Daniel Craig resume his Southern U.S. accent as he steps back into the role of private detective Benoit Blanc. This time, he’s on hand to uncover the guilty party among a group of high-flying friends, who have all been invited to the private island of their billionaire ringleader, Miles Bron (Edward Norton), for a friendly murder mystery game. But the fun times are few and far between, as the kill factor soon becomes all too real. A tangled web of lies, betrayal, and murder rattles the core group — referred to as “the disruptors” — as they’re forced to reckon with the fact that they have continuously chosen money over morals, leading to an almighty showdown.

As soon as she became aware of Birdie — an It girl and model-turned-fashion designer, with a penchant for saying and doing what she wants — Hudson knew she had to have the role. Recalling an early conversation with director Rian Johnson, the actor tells me: “I kind of knocked down his door. I was like, ‘Put me in, coach, please!’ I wanted to get in the room with him to talk about Birdie, and what I could maybe bring to it.” Hudson, who “loved” the first film, already had a pre-existing connection to the character’s moniker. “Birdie is my nickname. My dad has called me Birdie since I was three. It’s going to be weird if people start calling me ‘Birdie’ on the street,” she explains. At present, Hudson still hears yells of “Penny Lane” from fans, in reference to her breakout role in the 2000 cult classic Almost Famous.

Referred to as “the wild card” in the film’s promo materials, Birdie presents herself to the world as having a devil-may-care attitude. She glides — bulldozes, in fact — her way through life saying problematic things, yet always finding new ways to reinvent herself. For Hudson, it was a liberating role to take on. “To play an uninhibited character and body is so fun for me. You could just go there, you know? The bigger, the better,” she reflects. “Usually, you’d hear a director say, ‘Okay great, now pull back.’ And in this case, it was the opposite.”

Birdie and her fellow “disruptors” have their weaknesses and shortcomings uncovered as the whodunit plot develops. But I’m interested to know what Hudson considers her most disruptive quality to be. “That’s an interesting question. I would say my impatience can be disruptive. And my honesty. I can be really honest, and sometimes people don’t like that,” she muses. “I’ve had to learn that one. They don’t like it. I’m like, ‘You asked what my honest opinion was and I told you!’ It’s a very Aries [trait]. I’m such an Aries.” As a fellow member of the Aries club, I know exactly what she means, I tell her.

In Glass Onion, Hudson’s character is brought to life in an array of bright colours, with a glamorous ‘70s-inspired wardrobe befitting a former It girl. Curated by costume designer Jenny Eagan, Birdie’s standout look is a striking custom-made rainbow dress. The vibrancy is in stark contrast to that modelled by another of the disrupters, politician Claire Debella, portrayed by Kathryn Hahn. Tickled by the visual difference, Hudson recalls: “My costume row was just filled with all of these colours, glitter, prints, and hats, and then Kathryn's was a rack of everything beige.” Claire and Birdie have a tense relationship. There’s a lot of love there, but the two polar opposites are constantly sniping at one another. It was a different story behind-the-scenes, as Hudson relished the opportunity to reunite with her old friend, who she shared the screen with in the beloved 2003 rom-com How To Lose A Guy In 10 Days.

I would say my impatience can be disruptive. And my honesty. I can be really honest, and sometimes people don’t like that. I’ve had to learn that one.

“I remember getting on set, and the first thing I said was, ‘Is Kathryn here?’ I just wanted to, like, give her the biggest hug, because I hadn’t seen her in years,” Hudson reveals. Smiling as she looks back on their overdue reunion, the mum-of-three explains that busy work schedules, and the fact they both have families to raise, led to their years apart. But location also played a factor. “I’m west of the 405, and she’s east of the 405, and if that’s the way you live in Los Angeles, you do not see each other. The 405 freeway is the great divider of Los Angeles friendships,” she quips. “But we reconnected, and I will never lose sight of that friendship again. I care so deeply for her. She’s the best.” Hudson and Hahn portrayed magazine journalists and best friends Andie [Anderson] and Michelle in How To Lose A Guy In 10 Days. “We were babies. I’ve loved watching her career, and to work with her as an actress now, after all that work under our belt, is just so strong,” Hudson notes.

Now that the pair have reconnected in real life, can we expect a similar reunion between Andie and Michelle? Well, fans will be pleased to learn that Hudson is more than open to the idea of filming a sequel to How To Lose A Guy In 10 Days and teaming up with her former on-screen love interest Matthew McConaughey, who portrayed Mr. Vain himself, Ben Barry. “If it was the right script and the right people, then yeah. I would love to work with Matthew again, too. I love Matthew,” she shares. “I guess the question is: What would it be? I’m open to any good story. I wish there were more of them.”

In addition to acting, Hudson has created a number of brands within the lifestyle sector and is also focusing on launching a career as a singer. Elsewhere, she co-hosts the Sibling Revelry podcast with her brother, Oliver, where they discuss the intricacies of the relationship with other sibling pairs. And the Knives Out star may have competition in the musical department, also, as her actor brother is known for posting hilarious videos of himself singing self-penned songs about the mundanities of life. “That’s just Olly. He always makes me laugh. He’s nuts,” she says, affectionately. “Every family should have one, and I feel so lucky that we have Olly.” Reflecting some more on her brother’s online hijinks, she laughs: “His humour is really dark. I’m surprised he has not been cancelled!”

In December 2021, the Hudson siblings joined forces to sing a rousing rendition of “Happy Birthday” in honour of Britney Spears turning 40. The Instagram video was well received by the pop star, who reposted the clip on her own profile. In recent months, Spears has taken to sharing photos and thoughts about Hudson’s family, in particular praising Kate and Oliver’s mum, celebrated actor Goldie Hawn. “She’s f*cking God to me,” the music icon wrote in November, alongside a picture she posted of Hawn.

“It’s so sweet. She’s very loving towards our whole family,” Hudson says. “I think that’s wonderful because clearly she wants to create a loving family for herself and she feels close to… us and, you know, is very vocal about it. I love it. She’s a sweetheart.”

Family is at the centre of everything for Hudson, who lives with her musician partner Danny Fujikawa, their four-year-old daughter Rani Rose, and her two older children from previous relationships, Ryder Robinson, 18, and Bingham Hawn Bellamy, 11. The actor smiles at the mere mention of her mum Goldie. “We’re just so close,” she tells me. It’s no surprise then that her home environment is at the forefront of her mind when it comes to choosing roles. “At this point in my life, if something’s going to take me away from my family, I really have to love it. I’m way more particular about why I’m doing something,” she reasons.

As for what comes next for Hudson, she’s eager to branch out creatively. Although she gets sent a lot of scripts, she finds herself typecast. “I really like to play off-the-wall characters. That’s fun for me when I get those opportunities, which isn’t very often,” she shares. “I think that people like to see me in a certain part, so I get [offered] a lot of rom-coms, comedies, but I’m more attracted to characters that go out on a ledge a little bit. I usually have to fight for those parts.” Overall, her hopes for future projects are rather straightforward. “I just want to work with good people and have fun. I wanna make movies that make people happy and make people think.” And with that, it’s bye bye Birdie.