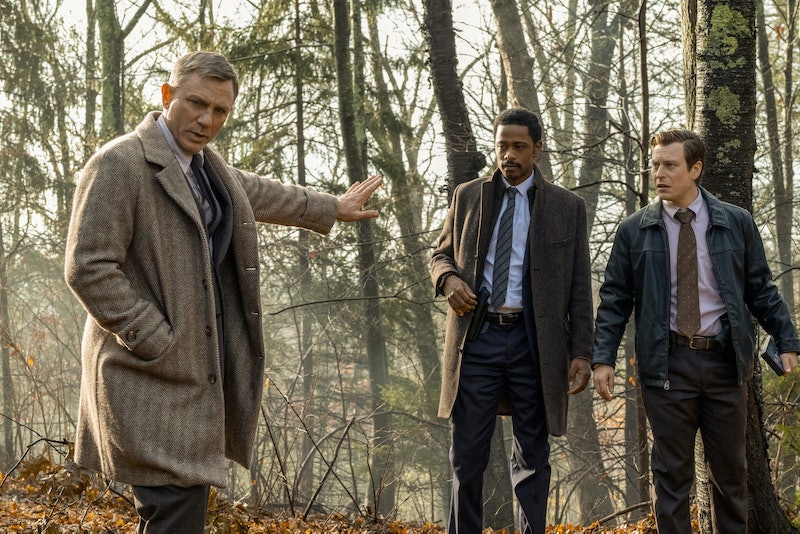 When it first premiered in 2019, the comedic mystery movie Knives Out won our hearts with its twisted storyline, star-studded ensemble, and an endless supply of quotable moments (“I read a tweet about a New Yorker article about you”). Chris Evans in that now-iconic sweater helped, too. Good news for fans of the hilarious movie, helmed by Daniel Craig’s Southern-accented sleuth, Benoit Blanc: two new Knives Out films are on the way. As first reported by Deadline, Netflix was close to acquiring the next two Knives Out installments for more than $400 million, “one of the biggest streamer movie deals in history.”

After a year of waiting, fans are finally privy to what sort of whodunnit misadventures detective Benoit Blanc will be embarking on next. In a series of tweets on June 13, director Rian Johnson introduced the sequel’s official title, Glass Onion: A Knives Out Mystery, and confirmed the next batch of star-studded would-be criminals involved in another twisty case. Here’s everything you need to know before audiences on another clue-filled journey including the plot, cast, and release date.

Expect a return to fun mystery vibes — but not to the Thrombeys’ New England “ancestral family home.” This time, Blanc is going to Greece (cue the Mamma Mia memes because he’d make an amazing fourth dad for Sophie) to “peel back the layers of a mystery involving a new cast of colorful suspects” per the logline.

Though talk about the Knives Out sequels started pretty much as soon as the first film premiered, with fans thinking the sequel would be set on some kind of Thrombey family vacation to the Mediterranean, this isn’t the case. Johnson has been clear that he is envisioning more of an anthology of standalone stories rather than a continuation of the dysfunctional family fans met in 2019. As he told The Hollywood Reporter in February 2020, “Think of it just like another Hercule Poirot novel from Agatha Christie, so a whole new location, whole new cast.”

Johnson, who also serves as the writer of the Netflix film series, doubled down on this inspiration further on Twitter on June 13, 2022. He wrote, “When I made Knives Out, that’s what excited me about the prospect of making more mysteries with Daniel as Benoit Blanc - to emulate Christie and have every film be like a whole new book, with its own tone, ambition, reason for being… and (ta dah) title.”

Craig, of course, is reprising his role for the series and just like the first film, he’ll be investigating a group of Hollywood’s favorites. The Hollywood Reporter confirmed in May 2021 that Moonlight actor and “Pynk” singer Janelle Monáe has been cast in an unspecified role. THR and Deadline also confirmed Kathryn Hahn of WandaVision “Agatha All Along” fame, Oscar nominee and Hamilton alum Leslie Odom Jr., Fabletics entrepreneur and Bride Wars actor Kate Hudson, and Edward Norton (Fight Club) and Dave Bautista (Guardians of the Galaxy) are all set to appear in the film.

In June, Deadline kept the cast confirmations coming by reporting Madelyn Cline of Outer Banks and Jessica Henwick of Game of Thrones would join the sequel. Not long after, Twitter went wild after Ethan Hawke, who was working on Marvel’s Moon Knight movie at the time, appeared to be filming with the cast in Greece. Johnson’s teaser video included all but one of the new cast members reported by Deadline. Hawke is noticeably missing from the video credits so it’s either he ended up not joining the film or he’ll make a surprise appearance. All of these roles are currently unknown — are they also family with secrets? Are they strangers bound by a Santorini expedition? will anyone be wearing a chunky knit sweater?! — but it won’t be long before we get character descriptions and see who else will accompany Blanc in the surely twisted web.

On August 22, 2022, Netflix shared a first look at the entire Glass Onion cast seated around a large wooden table for a “killer party.” Craig’s Blanc and Norton’s to-be-announced character stand at each end of the table, while Monae, Hahn, Odom Jr., Henwick, Cline, Hudson, and Bautista sit in notably varied costuming (Henwick and Cline are wearing distinctly opposite outfits, suggesting the characters were in disparate environments before being brought together by the crime at hand).

In April 2021, Jamie Lee Curtis, who starred as Linda in the first film, took to Instagram to address the casting situation in a playful way, saying that the family was in counseling and that their “therapist suggested they stay away from Benoit Blanc in the future.”

“Linda was fine as she kicked her loafer wearing prick of a husband, sorry @donjohnson to the curb,” she continued. “The rest of them are hustling. Joni has some vaginal scented bath bomb, Walt is self publishing his memoir. NONE of us will be joining Mr. Blanc in Greece.” OK, so we may not get the Thrombeys back — but the improvised fan-fiction Curtis just provided almost makes up for it.

However, we might not want to rule out all familiar faces just yet. Ana de Armas, who received a Golden Globe nomination for her role as Marta in the first Knives Out film, told Flaunt in October 2020, “I hope this is one of those surprises that 2021 will bring for me, a phone call from Rian!” We hope so, too. Marta’s involvement could make sense since she wasn’t part of the Thrombey family, and got on especially well with Blanc in the original movie. Maybe Marta joins Blanc in his sleuthing or bankrolls his trip to Europe with her newly inherited fortune.

A Knives Out 2 trailer was released on Sept. 8, featuring the star-studded cast in action, puzzles, and a gorgeous location.

Naturally, news of a Knives Out sequel comes with questions about when people can actually watch it. Johnson and the cast began filming in June 2021 and wrapped that September, according to a tweet from Johnson. According to Variety, Glass Onion: A Knives Out Mystery will make its world premiere at the Toronto International Film Festival. TIFF will take place from Sept. 8 to 18, and it’s unclear at the moment when exactly the Glass Onion film will premiere during the festival. Fans of the Knives Out film may recall that the first movie premiered at TIFF in 2019.

Johnson had also previously shared the film’s slated release period in June 2022; Glass Onion is slated to hit screens this holiday season, according to his tweet. Netflix confirmed that the film would make its streaming debut on the service on Dec. 23, 2022, and will also be screened in “select theaters on a date to be announced.” Fans who want to see Knives Out 2 on the big screen (and a bit sooner than late December) will be able to do so during Thanksgiving week. According to Variety, the movie will play exclusively in theaters from Nov. 23-29. This will make it the first Netflix movie to debut “across all three major U.S. theatrical chains” — AMC, Regal, and Cinemark. Tickets for the movie go on sale starting Oct. 10.

It seems that eager fans won’t have to wait long to see Glass Onion after Benoit Blanc makes his return in Canada.

This post will be updated with the trailer, release date, and additional plot and cast details as more information on the Knives Out sequel becomes available.

More like this
The First Trailer For 'That '90s Show' Includes So Many Nods To The Original Series
By Jack Irvin, Alyssa Lapid and Grace Wehniainen
How To Stream Knives Out 2: When Will Glass Onion Be On Netflix?
By Radhika Menon
You Definitely Know The Voice Of Shuri's AI In 'Black Panther: Wakanda Forever'
By Brad Witter
'Wakanda Forever' Is Already Opening Doors For Mabel Cadena
By Grace Wehniainen
Get Even More From Bustle — Sign Up For The Newsletter

This article was originally published on April 1, 2021