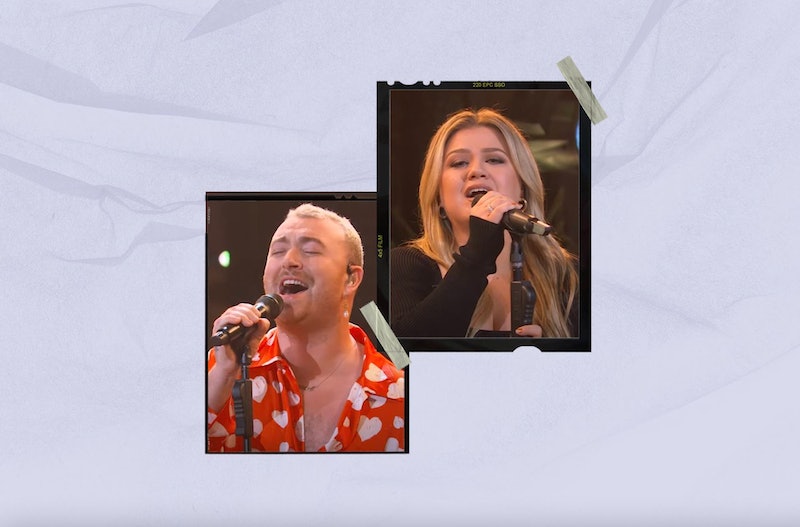 Kelly Clarkson is taking a risk and making a change to her 2004 hit song “Breakaway.” On Oct. 11, The Kelly Clarkson Show released a new live duet version of “Breakaway” featuring Sam Smith, her latest celebrity guest who requested to perform the nostalgic ballad with her. “I’m scared to sing this,” Smith told Clarkson during a rehearsal. Clarkson’s longtime music director Jason Halbert noted how this rendition will sound distinct. “It’s a little bit different year for us because we have 15 years of playing this song in a certain key, and we’ve lowered it a little bit for Sam.”

“Breakaway,” which was co-written by Avril Lavigne, came out 18 years ago as part of The Princess Diaries 2 soundtrack as well as Clarkson’s second studio album of the same name. The song has had a surprisingly big year in 2022. Lavigne, who originally recorded a demo of the song in 2001 before passing it off to Clarkson years later, released a re-recorded version of “Breakaway” in June 2022 as part of the 20th anniversary edition of her debut album Let Go.

Meanwhile, Smith was on Clarkson’s talk show to promote “Unholy,” his hit with Kim Petras, which just peaked at No. 2 on the Billboard Hot 100 singles chart. Clarkson, who recently received her star on the Hollywood Walk of Fame, has been a longtime fan of Smith’s music, covering their songs “Stay With Me,” “Lay Me Down,” and “Too Good At Goodbyes” over the years.

The 30-year-old pop star also revealed that Ed Sheeran gifted them with a six-foot marble penis statue, which he might name the Duke of Hastings, inspired by Bridgerton.

More like this
Watch Kelly Clarkson Sing A Taylor Swift Breakup Song About A Toxic Relationship
By Alyssa Lapid
Britney Spears Shares & Deletes Photos Of Justin Timberlake From 22 Years Ago
By Jake Viswanath
20 Years Ago, J.Lo Was Supposed To Kiss Madonna With Britney At The VMAs
By Jake Viswanath
Cruz Beckham Teased New Music With An Adorable Nod To Mom Victoria Beckham
By Stephanie Topacio Long
Get Even More From Bustle — Sign Up For The Newsletter
From hair trends to relationship advice, our daily newsletter has everything you need to sound like a person who’s on TikTok, even if you aren’t.