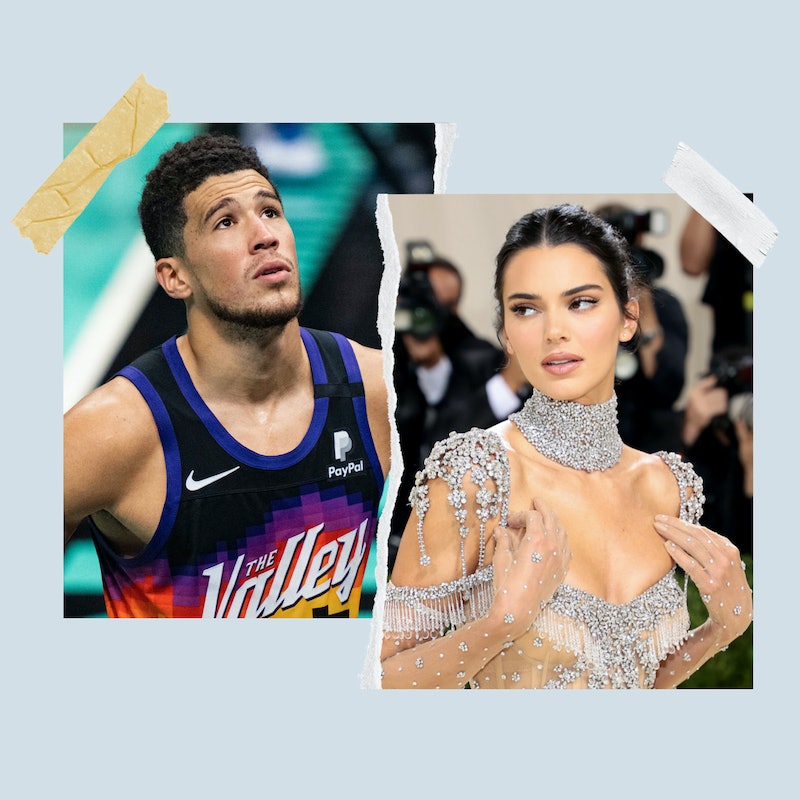 All but one member of the Kardashian-Jenner family has been open about their romantic relationships, but it seems like the tide is turning. Kendall Jenner just dished on her romance with basketball star Devin Booker. During an appearance on The Tonight Show Starring Jimmy Fallon, the 25-year-old model said her boyfriend and her sister Kylie Jenner’s 3-year-old daughter Stormi share an “amazing” bond. “She has the biggest crush on him, and I’m jealous sometimes,” she said. “I’m like, ‘Stop, can you guys not?’”

Aside from this Sept. 14 interview with Fallon, there isn’t a ton of information about Jenner and Booker’s relationship online, and that’s because they’ve done such a good job at keeping it under wraps. What we do know, however, is that the lovebirds have been together for more than a year now and, according to Jenner, the 24-year-old NBA player brings out her competitive side.

Fans might be surprised to know that they were first spotted out together on a double date many years ago — with other people. At the time, Booker was dating Kylie Jenner’s former best friend Jordyn Woods. Kendall, on the other hand, was involved in an on-again, off-again relationship with Philadelphia 76ers star Ben Simmons.

So, how did Jenner and Booker go from friends on double dates to the in-love couple they are today? Here’s a look at their complete relationship timeline.

Jenner and Simmons met up with Booker and Woods in Los Angeles for dinner in May 2018, which marked the first time that the model and the Phoenix Suns player were ever spotted together. Their relationship was platonic at the time, but in hindsight, the double date seemingly backfired because they wound up dating each other instead of the people that they originally came with.

Jenner and Booker weren’t spotted together again until two years later. In photos published by TMZ, the duo was spotted on a road trip together to Sedona, Ariz., in April 2020. That same month, the model was criticized for mainly dating basketball players. “They act like I’m not in full control of where I throw this cooch,” Jenner wrote in response to a tweet that suggested that basketball players were “passing” her around.

Rumors about a romance continued to swirl in May, and the duo didn’t do much to hamper them. In fact, the Keeping Up With the Kardashians star was spotted picking up the athlete from the Van Nuys Airport in Los Angeles, leading fans to wonder if their rumored romance was getting serious.

“They’re hooking up, but they’re not serious,” a source told Us Weekly in June 2020. “She’s talking to a couple different guys. She has so many men after her it’s crazy.” This update came after Jenner briefly reconciled with Simmons earlier in the year, but according to the magazine, the two were “not officially back together.” “They both like having a no-strings-attached type of relationship with each other, for the most part,” a source previously told Us Weekly of Jenner’s past relationship with Simmons. “They both work and travel frequently and don’t find it very realistic to be in an exclusive relationship with one another.”

Nothing says romance like flirty messages on Instagram. When Jenner captioned a photo of herself with a strawberry emoji in August 2020, Booker slid into the comments of the post. “I like strawberries,” he wrote. In response, the reality star sent back four additional strawberry emojis, confirming that at the very least, they were into each other.

A Us Weekly insider reported that “Kendall and Devin are seeing each other, but aren’t serious and are just having fun with each other.” The source added that their relationship until that point had been “easy,” especially since Booker got along so well with her family.

Despite trying their best to keep their relationship low-key, Jenner and Booker were spotted in the background of a photo from Kim Kardashian’s 40th birthday bash on a private island.

Fans knew that things were heating up between Jenner and Booker the following month when the model posted a photo with the basketball player on Instagram. The picture she shared was from the photo booth at her 25th birthday bash in Los Angeles.

The couple really took their relationship to the next level after the new year. In January, Booker reportedly shared a photo of Jenner in a bikini on Instagram. Kendall, for her part, shared a picture of herself watching the athlete play against the Dallas Mavericks.

Jenner gave a rare glimpse at one of the couple’s more romantic moments. On Valentine’s Day, she shared an image of the two cuddling on the kitchen counter. Per Us Weekly, Booker also commemorated the day by sharing a video of them playing with the dog and lying on the grass.

One month after showing off some Valentine’s PDA, Us Weekly reported that their relationship is becoming more serious. “They are definitely an item and care about one another immensely,” an insider said. “But it’s not like they will be getting engaged any time soon. Kendall likes the pace at which things are going at the moment and has no plans to elevate things so quickly.” An Entertainment Tonight source echoed that sentiment, adding that Booker makes Jenner feel “comfortable and safe.”

Jenner captured Booker’s attention in April when she posted photos of herself in her Easter dress on Instagram. “Very beautiful…course,” he commented. Then, they were spotted holding hands while walking to dinner at New York City’s Carbone. “This is the happiest Kendall has been in a relationship,” an E! insider revealed. “It’s getting more and more serious and she is very happy.”

E!’s source also said that Booker is “quiet and not interested in being in the spotlight or a celebrity,” which could explain why they’ve tried so hard to keep their romance under the radar. “She really appreciates that about him and is attracted to that. They are really similar and love just being low-key and staying in and laughing together.”

June was a big month for Jenner and Booker, as they were celebrating their first anniversary. To honor the occasion, she shared a series of photos of her beau on Instagram. Kendall kept the captions simple, writing “365” and “52” on two of the pictures to mark the number of days and weeks that they were in a relationship. Later that month, Us Weekly reported that Booker “practically moved in” with Jenner. “They really respect each other’s careers and give each other space to focus on her modeling or his basketball career,” a source said. “That’s probably what makes their relationship work so well is that they have that work-life balance.”

In Part 2 of the KUWTK reunion special, which aired on June 20, Kendall also revealed why she likes to keep her relationships so private. “No offense to my older sisters at all, but I think that Kylie [Jenner] and I specifically have had the opportunity to watch our older sisters go through marriages and relationships and breakups and do them pretty publicly,” she said, adding that keeping things on the down-low makes her life “a lot easier.”

When Booker played against the Milwaukee Bucks during the NBA Finals, Jenner showed up to show her support. Alongside a video of a lit-up arena, Kendall wrote: “I’m not emotional, you are.” When the Suns made it to game 5, Jenner took to her Instagram Stories to share a photo of her wearing a Phoenix Suns jacket.

The couple closed out the summer by celebrating Jenner’s 818 Tequila brand. “They kept making eye contact throughout the night and never strayed far away from each other,” an eye witness at the event told Us Weekly. At the end of the night, they walked out together hand in hand with nothing but smiles.” That same month, Booker shared a photo of a bikini-clad Kendall on a boat wearing the gold medal that he and the rest of Team USA won at the 2021 Olympics in Tokyo.

Fast forward to September and it seems that Jenner and Booker are stronger than ever. During an appearance on The Late Show Starring Jimmy Fallon, Jenner said that the basketball star gets along great with her family — especially her nieces and nephews. “He loves them,” she said.

In that same interview, the reality star revealed that her boyfriend brings out her competitive side. “We were playing in the pool, and he just took it way too seriously—as did I, by the way,” she said of their water-basketball game. “I had the ball, and he was guarding me, and it was a whole thing. He actually ended up cutting my hand open a little bit with his nail because he took it a little too seriously.” Fortunately, Jenner said that she’s on the mend.