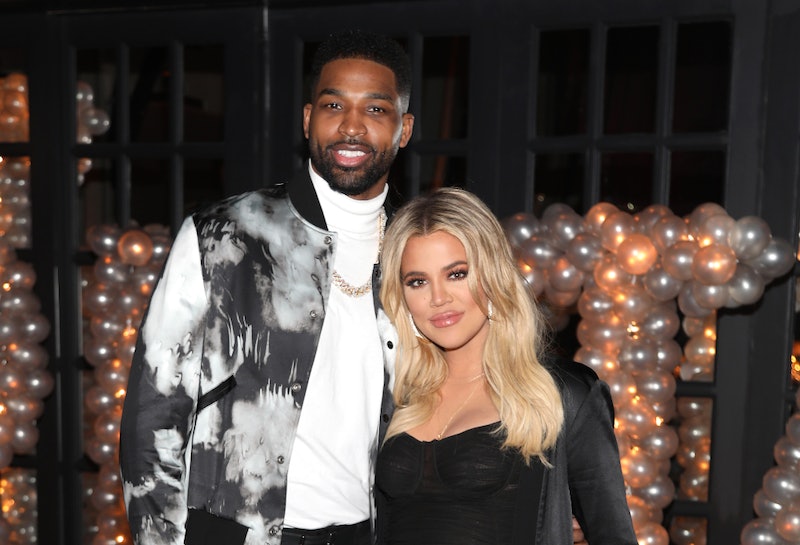 The meme-machine has been in full swing since Twitter found out that Khloe Kardashian and Tristan Thompson are having another baby together. First reported on July 13 by TMZ, Kardashian’s representative later confirmed to Bustle that the pair’s child will be born by surrogate, and was conceived in November last year. The on-off couple’s eldest daughter, True Thompson, was born in 2018. “Khloe is incredibly grateful to the extraordinary surrogate for such a beautiful blessing,” her rep told us. “We’d like to ask for kindness and privacy so that Khloe can focus on her family.”

Unsurprisingly, many were left reeling by the update, given that Thompson and Kardashian split up in late 2021 after it emerged that the basketball player was expecting a child with Maralee Nichols. “Khloé, you don't deserve this," Thompson wrote on an Instagram story at the time. "You don't deserve the heartache and humiliation I have caused you. You don't deserve the way I have treated you over the years. My actions certainly have not lined up with the way I view you. I have the utmost respect and love for you. Regardless of what you may think."

Though many on Twitter assumed the announcement means that Thompson and Kardashian are back together again, that’s not necessarily the case. A source told Bustle that the baby was conceived before Kardashian found out that Thompson was having a baby with Nichols, and that they now only speak to discuss co-parenting matters.

Still, the internet was full of reactions straight away. Some grappled with doing the maths to work out when the former couple’s future baby is due (reports from TMZ suggest imminently) while others made creative use of everything from Euphoria to Judge Judy to express their shock and surprise.