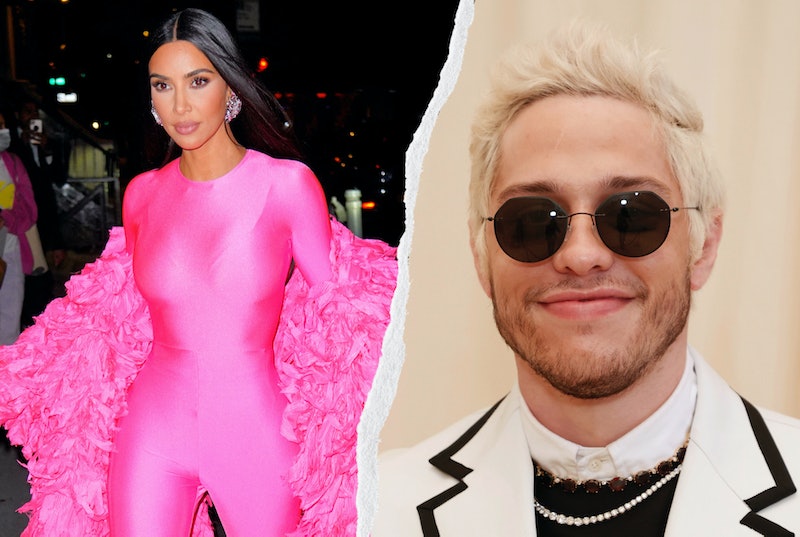 Halloween weekend might usually be a time to spot celebrities in daring, creative costumes — but during a spooky outing on Friday, Oct. 29, Kim Kardashian and Pete Davidson were dressed down and totally themselves. The reality star and Saturday Night Live fave were seen at Knott’s Berry Farm (er, Knott’s Scary Farm through Halloween), where they sparked dating rumors by riding together on multiple attractions and even holding hands on a roller coaster, as People reported. Recently engaged Kourtney Kardashian and Travis Barker were also along for the thrills.

Though the apparent double date may seem surprising, it actually makes a lot of sense that Kardashian and Davidson would be hanging out together. Not only did Kardashian recently host SNL (and share a hilarious Aladdin-inspired sketch with Davidson), but the pair has a mutual connection in Machine Gun Kelly, a friend to both Davidson and Barker, Kardashian’s future brother-in-law. Plus, Davidson has spent time with the Kardashians before — he and former fiancée Ariana Grande attended a Kanye West listening party in 2018, and Davidson even went out to dinner with Kimye the following year (long story, he ended up footing the bill, but described Kardashian and her now-ex as “very, very sweet people”).

So, it seems like a budding connection had already been in the works — but according to a People source, it’s totally platonic. “They hang in the same circles so they will be together from time to time,” the insider told the magazine. “It’s just friends hanging out.”

Of course, with a pair as high-profile as these two, Twitter isn’t convinced just yet. Here are the best memes and tweets about Kardashian and Davidson’s night out.

Some people were just plain confused by the idea of the two hanging out, romantically or otherwise. “I didn’t think they existed in the same universe,” one person tweeted after hearing the celebs had been linked.

Joy was not necessarily the first emotion some people felt. “If Pete Davidson and Kim Kardashian are together I’m going to throw a FIT,” one person wrote.

Naturally, their history — namely that dinner — came into the conversation.

Other people saw this pairing as the inevitable result of Kardashian’s SNL gig, especially considering that Davidson started seeing Grande after she hosted.

Meanwhile, at least one fan suggested that Kris Jenner was behind the rumors to drum up interest in the Kardashian family’s upcoming Hulu series.

But hey, some fans got behind the idea of Kardashian and Davidson actually dating, just in case “friends hanging out” ever changes.