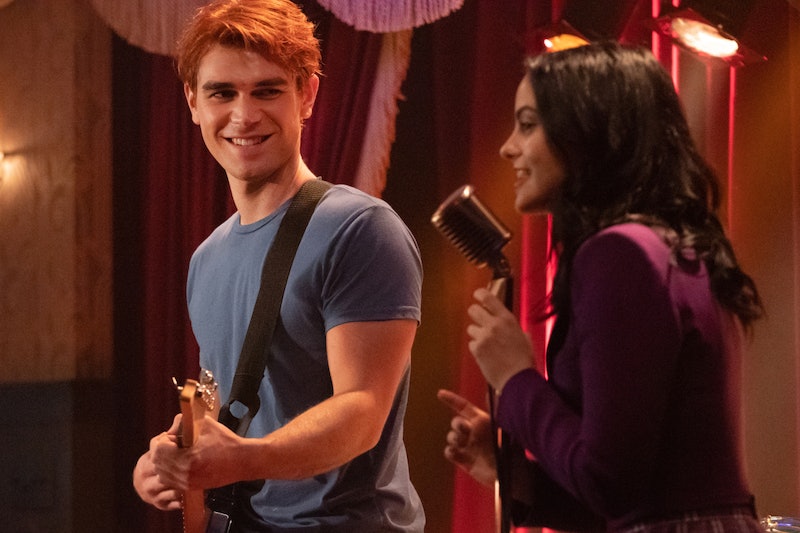 The ongoing coronavirus pandemic has affected people all over the world — and that includes fictional cities like Riverdale. Now that production has resumed on the hit CW show, KJ Apa and Camila Mendes revealed Riverdale's anti-COVID protocols for kissing scenes on Instagram taken behind-the-scenes of an upcoming episode. Since the pair can't stay the recommended six feet away from one another while filming romantic moments between their characters, Archie and Veronica, the actors need to thoroughly gargle with what we can only hope is some kind of magical COVID-killing mouthwash before each and every take of their kiss.

"Our new normal is washing our mouths before every take of a make-out scene..." Apa wrote on Instagram, along with a video of himself linking arms with Mendes and offering up a toast before they begin gargling for about a minute. In the clip, the pair pull goofy faces at one another and try not to laugh during while a member of the production team counts out how much longer they have until they're done. Mendes reposted the video on her Instagram Story, along with a cheeky "cheers" emoji. It's an odd state of affairs, but at least it shows fans that not only are Apa and Mendes being safe, it seems like they're still filming kissing scenes together, which means Varchie is still alive and well.

The Riverdale cast has been very open about the way that things have changed on set due to the coronavirus pandemic. Back in August, Lili Reinhart told Jimmy Fallon that after the cast and crew completed their two-week quarantine in Vancouver, where the show is filmed, Riverdale will actually need to finish filming Season 4 before beginning new episodes. "We have to finish three days of one episode that we were filming in March," Reinhart said during an appearance on The Tonight Show Starring Jimmy Fallon, revealing that the show was about "two and a half" episodes away from wrapping Season 4.

In order to keep the cast and crew safe on set, Reinhart told Nylon in early September that the Riverdale cast is required to stay in Canada until after the holidays, rather than flying back and forth as freely as they usually do. "I genuinely feel like a prisoner, going back to work, because I cannot leave Canada," she said. "That doesn't feel good. You can't go home for Thanksgiving, can't visit your family. No one can come visit you unless they quarantine for two weeks. It just feels f*cked." A few days later, she clarified her statements on Twitter. "I’m not complaining about going back to work, I’m incredibly grateful to have a job," Reinhart wrote, explaining that, "I’m sad that I can’t see my family for months on end due to travel restrictions."

In addition to making changes to accommodate COVID-19 precautions, Riverdale is also attempting to improve its diversity in the wake of Vanessa Morgan's claims that the characters of color had been "sidelined" by the show's writers and producers. In a series of Twitter posts shared in June, Morgan wrote that Riverdale's black characters were "used in the ads for diversity but not actually in the show," and were not given the same character development and storylines as the white leads. Show runner and creator Roberto Aguirre-Sacasa responded to her posts with an apology, and promised to "do better" for both Morgan and the other Black actors on the show.

"We hear Vanessa. We love Vanessa. She's right," Aguirre-Sacasa wrote on Instagram. "We're sorry and we make the same promise to you that we did to her." He continued by promising that Riverdale "will do better to honor" all of the actors and characters of color going forward. He ended his statement promising for sustained change in the series, writing, "Change is happening and will continue to happen. Riverdale will get bigger, not smaller. Riverdale will be part of the movement, not outside it."

In an interview with the Los Angeles Times, Reinhart revealed that he also called the entire Riverdale cast to discuss the show's problems and "make sure we all felt comfortable." She continued, "I mean, the show historically has been pretty white. [But] Roberto is very conscious of it now to make sure that that doesn’t happen again and Vanessa doesn’t feel that she’s put in that position again."

More like this
'The Queen’s Gambit' Season 2 Tweet Wasn’t From Anya Taylor-Joy
By Mary Kate McGrath, Jack Irvin and Grace Wehniainen
Netflix Shut Down 'Bridgerton' S3 Rumours About A “Very Dark” Storyline
By Bustle
'GoT' Star Emilia Clarke Says She "Just Can't" Watch 'House Of The Dragon'
By Brad Witter
RHOP’s Robyn Dixon Explained Why Juan Paid For Another Woman's Hotel Room
By Brad Witter
Get Even More From Bustle — Sign Up For The Newsletter
From hair trends to relationship advice, our daily newsletter has everything you need to sound like a person who’s on TikTok, even if you aren’t.