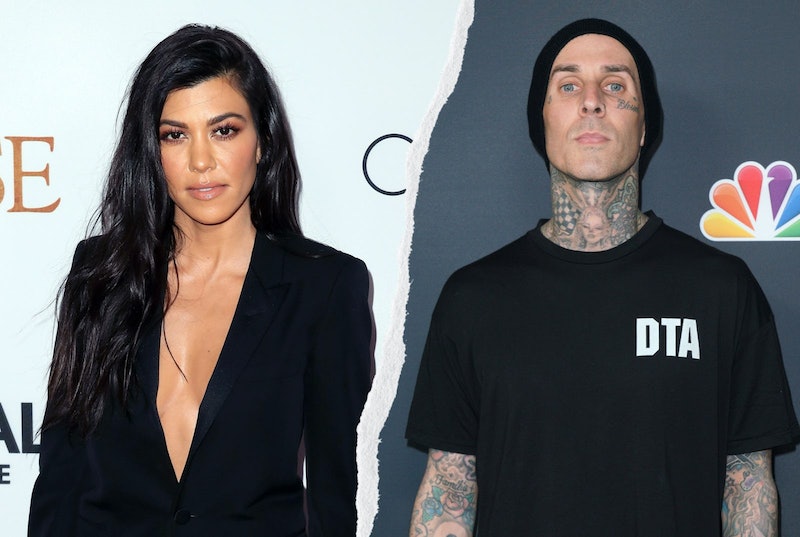 Kourtney Kardashian and Travis Barker have spent a lot of time in the snow recently, but their relationship is definitely heating up. On Monday, April 5, the Blink-182 drummer shared a series of videos on Instagram from their joint family vacation, all of which prove that they’re closer than ever. In one clip, the couple is cozying up to each other outside at night; in another, they’re tubing down a snowy hill together. “Real is rare,” the musician captioned the post, adding a black heart for good measure.

Kardashian, for her part, hasn’t posted photos or videos with Barker from their trip. She did, however, share a carousel of images of her hanging out by the fire with 6-year-old Reign, as well as a photo of herself riding a snowmobile with Atiana De La Hoya (the daughter of Shanna Moakler, Barker’s ex-wife). The reality star was also recently featured in a TikTok shared by Barker’s 15-year-old daughter Alabama of the two families doing the “pass the phone” challenge. In it, she referred to the drummer as her “boyfriend.”

It wasn’t a total shock that the 41-year-old referred to the rocker as her boyfriend — especially considering all of the love notes she’s written him recently. On March 23, for example, Barker posted a photo of a note in Kardashian’s signature handwriting that said “I love you.” Earlier that month, he shared another love note from the Keeping Up With the Kardashians star. “To lots of fun adventures,” the note read. “May we destroy each other completely. Love, Kourtney.”

If you’re looking for more proof that Kourtney and Travis’ relationship is getting serious, look no further than the musician’s new “you’re so cool” tattoo on his upper thigh. The ink is a reference to Quentin Tarantino’s movie True Romance, which is a film that seems to be special to the couple. In January, the Poosh founder posted a still from the movie on her Instagram page and Barker slid into the comments. “You’re so cool,” he wrote.

While they haven’t been together for that long, Barker has been fairly vocal about his feelings for the reality star. On March 4, he appeared on The Drew Barrymore Show and spoke openly about why his current relationship is different from relationships in the past. “Now I'm spending time with a woman who's a great mom, who’s a great friend,” he said, adding that Kardashian understands what it’s like having to juggle being a parent with everything else. “It just comes natural. It’s like a maturity thing.”

People first reported that Kardashian and Barker were dating on Jan. 24. "They're in Palm Springs together. They’ve been dating for about a month or two," a source told the magazine at the time. "They've been friends for a long time but it's turned romantic." Entertainment Tonight's source echoed that sentiment, adding that the couple’s kids “get along so well too.” Based on the recent footage from their family vacation — and yes, that hilarious TikTok — we simply have to agree.

More like this
Kourtney Kardashian Claps Back At Pregnancy Speculation On Instagram
By Jake Viswanath
Who Is Nick Cannon Dating & How Many Kids Does He Have?
By Jordyn Tilchen and Radhika Menon
Oprah Winfrey Revealed Her Hopes For Prince Harry & The Royal Family
By Maxine Harrison
How To Apply For 'Survivor' & Tips On How To Get Cast
By Meg Walters
Get Even More From Bustle — Sign Up For The Newsletter