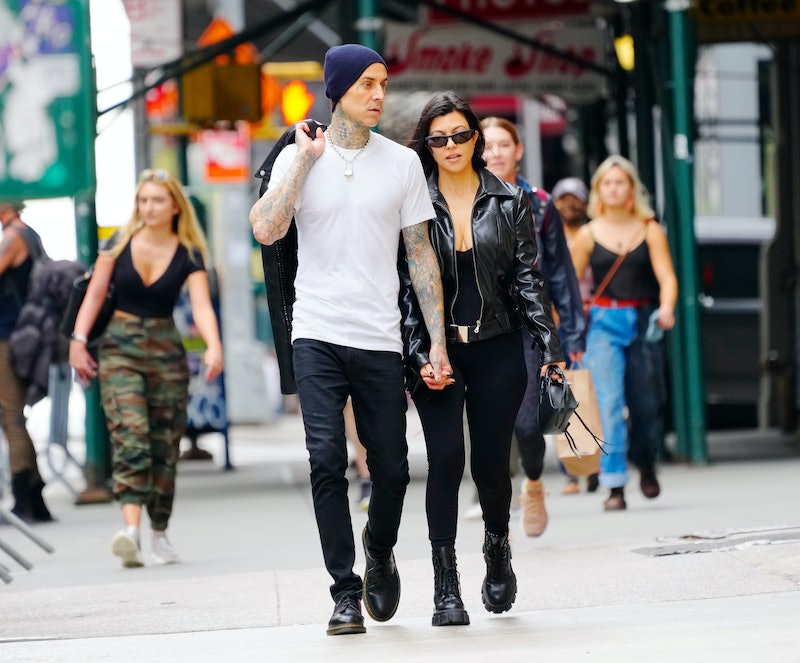 October’s been a month of wonderful Kardashian chaos on Saturday Night Live. It started on Oct. 9, when Kim Kardashian West hosted and brought mom Kris Jenner and younger sister Khloé along for the ride. She memorably poked fun at pretty much every KarJenner over the course of the show, including big sis Kourtney back at home via the hilarious “People’s Kourt” sketch. One week later, the eldest Kardashian sibling showed up at SNL herself — not as host or surprise celebrity guest but as behind-the-scenes support for boyfriend Travis Barker as he drummed for musical guest Young Thug.

The couple had previously been spotted strolling around New York leading up to the weekend, as E! reported, and they then took to their respective Instagram accounts to document the big day. It started with a jaunt through the city in the hours before SNL, and while the famous pair was naturally snapped by photographers and passersby alike, they also did some people-watching — or feline-watching? — of their own. Their stories captured a pedestrian with a see-through cat backpack. (So maybe an adorable pet is all you need to show up on the famous family’s radar?)

Closer to showtime, Kardashian started to post pictures from SNL, from her arrival at 30 Rock to a behind-the-scenes name card for Barker.

Then, Kardashian and Barker hung out in a green room filled with past guests’ photos — and the Poosh founder proved that she has some drumming skills of her own. Well, sort of. In lieu of an actual drum set, Kardashian seemed to tap a pair of drumsticks on Barker and even let him bite one before the situation evolved into some of their usual PDA.

Barker posted photos of him with the musical man of the hour, Young Thug, in the same room.

The Blink-182 drummer also offered a rare glimpse of what it’s like to perform at SNL, sharing photos from his seat on stage.

After their SNL visit, Kardashian continued to document her side of the trip with a beloved Sunday tradition — brunch, of course. All in a weekend’s work for the fun-loving, passionate couple.