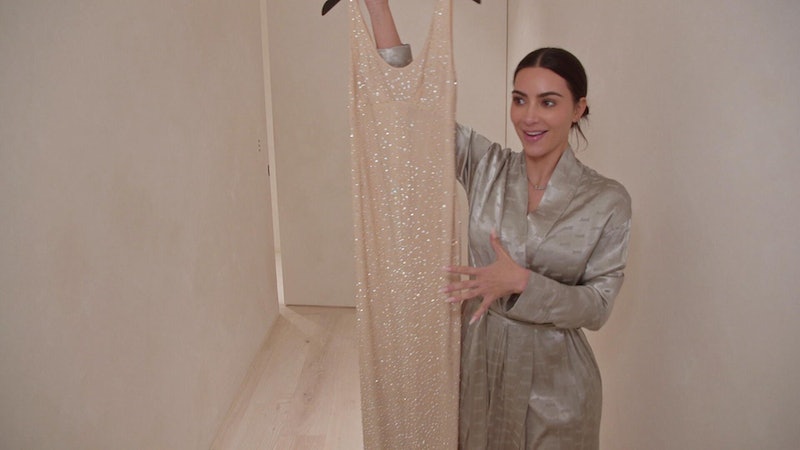 At the 2022 Met Gala, Kim Kardashian wore Marilyn Monroe’s actual 1962 gown that she donned to sing “Happy Birthday” to then-president John F. Kennedy, causing both awe and controversy. But it came very close to not happening — and the world’s most famous momager had to come to the rescue. As revealed on the Nov. 10 episode of The Kardashians, Kris Jenner persuaded Ripley’s Believe It Or Not, who owns the iconic dress, to let her daughter try it on one last time after she had failed to squeeze into it on her first fitting.

“They were not gonna let me wear this dress, they weren’t even gonna let me try it on until Kris Jenner calls,” Kim explained in a confessional. “I was like, ‘Please, Mom, if you make this happen, I will marry you.’ I would’ve done anything. I was there and I was like screaming at her on the phone going, ‘I’ll pay for it! I’ll fly to Florida! I’ll do an appearance at Ripley’s! I’ll this!’ And she was just like, ‘Shut up! Shut up!’” Of course, in typical Kris fashion, she refused to divulge her magical methods. “I cannot tell you my secrets,” Kris told the camera. “But if somebody says no, you know what I say: ‘You’re talking to the wrong person.’”

After Kris stepped in, Kim flew to Ripley’s Believe It Or Not in Orlando for one final fitting that would determine if she would attend the Met Gala or not, as she had no backup plan. “I will be crushed if this doesn’t pay off,” she said. It paid off. She walked the Met Gala red carpet in Monroe’s original dress, with her then-boyfriend Pete Davidson dressed in a dapper tux and acting as her JFK, before changing into a replica once she entered the main event. However, the dress wouldn’t completely tie around her butt, which is why Kim opted to wear a white fur shaw to cover it up.

Kim wearing the most expensive dress in the world wasn’t the only thing that caused criticism, as the reality star also received flack for undergoing an intense weight loss regimen to fit into the gown, which included wearing a sauna suit while exercising and cutting sugar and carbs out of her diet. As Kim explained later in the episode, she considered the look as a “movie role” and did whatever she needed to prepare for the part, which also included watching documentaries about the late superstar in addition to changing her body.

“When I thought to go in Marilyn Monroe’s dress, and I knew how previous and fragile the dress is, I knew I had to lose at least 10 pounds for it to even go up on me,” she said. “This feels exhausting, but it feels like a movie role, like how an actor will lose weight, gain weight for roles. It feels like my role is Marilyn Monroe. I’m determined.” She won’t win an Oscar for it, but her Met Gala look will still go down in the history books.