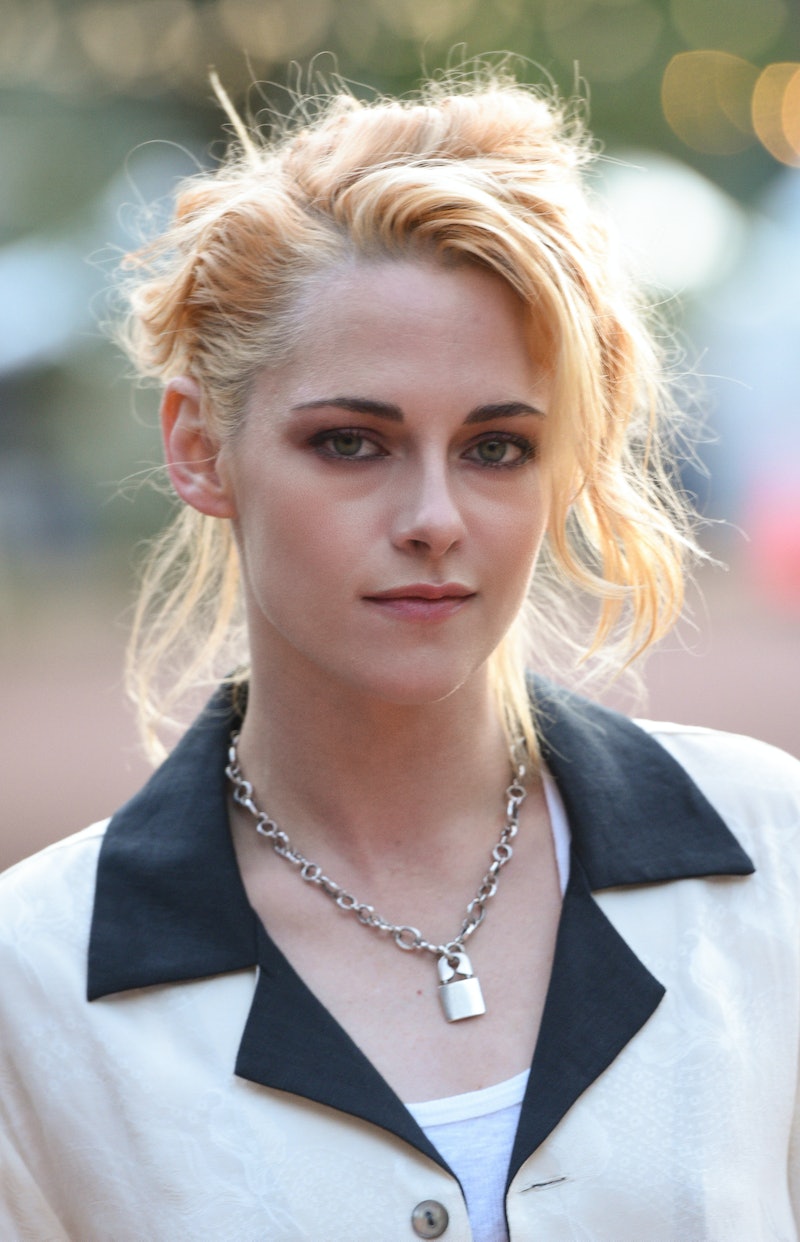 Saying nothing is an art. Just ask the royal family — not least the late Princess Diana — how difficult it is to bite your lip, to gracefully pivot the conversation, to grin and bear it. Explicitly forbidden from stating political opinions, and implicitly forbidden from sharing all but the most superficial tastes, the Windsors spend a lifetime conversing with British citizens, presidents, and international luminaries, all without ever truly uttering a word.

“She was asked to not exist,” says Kristen Stewart of the Princess of Wales. The actor plays the late princess in Pablo Larraín’s newly released film, Spencer. Set during the winter holidays in 1991, the movie imagines the events that led to Diana and Prince Charles’ formal separation the following year. Stewart’s Diana is desperate, losing her grip as the palace walls close in (and as her curtains are literally sewn shut, lest determined paparazzi sneak onto the estate). “There must be two of you,” Charles tells her: one for the public and the press, and another behind closed doors. But while the rest of the royals easily compartmentalize, Diana is fractured by the distinction.

Royals aren’t the only ones who practice this art. Some actors spend years learning how to say nothing, rather than risking the attention — positive or negative — that comes from honesty. But not Stewart. Even after over a decade in the spotlight, she’s still speaking up. “If you fixate so much on how you’re presenting yourself or the cumulative sum of everything you say ... you would drive yourself crazy,” she says. Language is an inexact science, anyways; in trying to say anything, you open yourself up to misspeaking and misinterpretation. “I think I've gotten a little bit more comfortable and found an ease in the chaotic ways that we communicate with each other,” Stewart says.

Still, she isn’t a completely open book. When I join the Zoom, I start by congratulating her — she’d just announced her engagement to Dylan Meyer the day before. She lets out a confused “thank you” before I explicitly mention her fiancée. “Wasn’t sure what you’re congratulating me on, actually,” Stewart admits. The next day, I see reports alleging that she’s been wearing her engagement ring for at least a month; no wonder she’d felt a little removed from the news. Some things are better kept to yourself.

Below, Kristen Stewart discusses the nature of fame, Diana’s struggle with the spotlight, and Spencer’s brush with sapphic romance.

Like Diana, you were a teenager when you were thrust into the spotlight with Twilight. Did you draw on any of your own experiences when you were figuring out how to play her?

I mean, I guess it's apples and oranges, because the reason the cameras are there is ... The transaction is such a different thing. As an actor, all I want to do is open myself up to people and have a revealing experience. And I’m so completely in control of that. In a literal sense, can I leave my house and go get coffee and tell [the paparazzi] to f*ck off? No. But that holding hands with the work that I try to make so honest and personal, it's really hard to compare. So I know it seems like I have this particular insight about scrutiny and attention and what it feels like to be stolen from. And it really does feel different. I guess on a logistical scale, I understand, but emotionally I feel lucky that people want what I'm selling. And I don't mean that — I mean that as an expression, not literally. But yeah. You know what I mean.

I think actually relinquishing control is the most important thing, because if you fixate so much on how you're presenting yourself or the cumulative sum of everything you say — especially if you do interviews for hours and hours in a room and you're 18 and you're not quite putting things the way you necessarily would if you were given five more minutes — to worry about those things, you would drive yourself crazy. Or to get mad at people for getting the wrong idea of you. It's like, that's not wrong. That was you in that moment, bro. So I think I've gotten a little bit more comfortable and found an ease in the chaotic ways that we communicate with each other.

And I think as a person who's a human and not an actor, that would've been something that you would get better at and more used to as you got older. I guess just relating it to Diana, and not — I'm not trying to get your interview back on track or anything — but she was asked distinctly to perpetuate a lie that was completely farcical and didn't exist. And she also became famous at such a young age. That is when you're figuring out who you are. That is when you're figuring out how you want to relate to other people and what your tonal quality is and what works and what doesn't work. And she was asked to not exist before she existed.

You definitely made me laugh when you said “get your interview back on track.” When you go into a huge round of interviews like this, is there a certain thing that you're hoping to communicate through them?

No. It's funny because through this process, you get to start figuring out why you made a movie. I think when you're making the thing with people that ultimately are your friends, you don't need to define everything because you're sharing space and the temperature in the room is the same. So you don't have to hang a lantern on it. You both feel it. You both know it, there's something more ephemeral. And then you do these things and you're like, "Oh, wow. I guess I gotta try and f*cking put a name on it." It's a different experience. And so coming into these things, it's still just a different process of discovery. I'm like, "Wow, I wonder what this is going to uncover." I mean, I guess some people really try and come out with like, "I'm trying to sell my movie." I really like this movie. So I think whatever conversation happens will be reflective of the thing. And if people are interested, go see it. I'm not trying to convince anyone. So no, I really come in ready to talk about stuff.

Is there anything that you learned about Spencer so far through this whole process?

I've been asked a lot about the opening card presenting the movie as a fable. And so therefore, what have you learned? I don't know ... I think there are so many ways to look at this. And to be honest, no, we haven't answered any of the questions. Let me just figure out whether or not the monarchy is obsolete! Let me just figure out what exactly the differences are between how the media treats men and women who are famous, which is obviously starkly different.

These are all conversations that [Diana] had and she was super willing to lean into at the end of her life. But basically, in a word, it's hard to answer that question because it's a long conversation. It's a complicated thing.

But is there anything that I've learned in these things? No, I don't know. One thing about doing these interviews is you get asked questions and you're like, "I guess I should probably think of an answer for that question, but I haven't really considered that in those terms, whatever." So then you try and say something that makes sense or say something that someone can hold onto or define.

[Diana’s] somebody who makes people feel a lot and for a million different reasons. And I think the movie endeavors to articulate that better than I would ever be able to sitting right here in this interview.

I can’t finish this interview without asking: Did you at any point wish even a little that Diana had run off with Maggie, Diana’s dresser? I was obsessed with the scene where Maggie confesses her love.

I know. I was so in love with Sally Hawkins [who plays Maggie] on this movie, and like the roles were reversed. Man. Yeah, of course. Dude, going out with her, fun. I couldn't stop laughing with this woman. There's the one moment in the movie that there is serious, contagious levity ... They have this scene that reminds Diana that people do love her, which has an absurd quality to it, because she's obviously highly coveted. Everyone loves you, dude. But then in this very personal, very vulnerable way, both of them are reminded that there are individuals in all of this too. And I think it's so cute when she starts laughing with her. Yeah, I don't know. Of course. I totally ship Maggie and Diana.