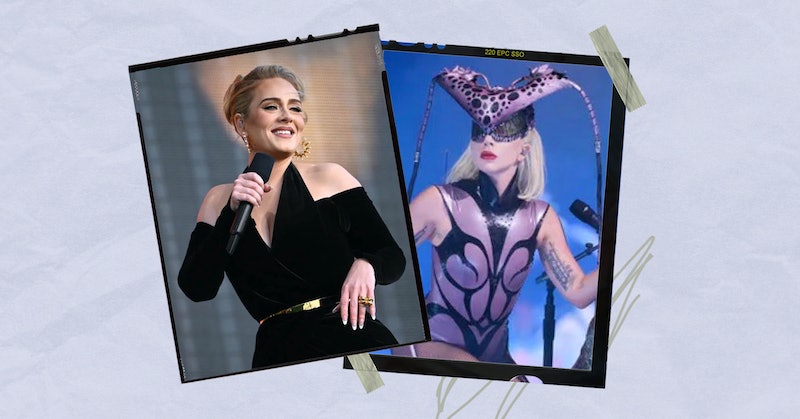 The Emmy Awards aren’t only for TV stars. As confirmed on Aug. 3, Lady Gaga and Adele are both nominated at the 2022 Emmy Awards, facing off against each other in the Outstanding Variety Special (Pre-Recorded) category. The confirmation comes a few weeks after the initial list of nominees were revealed because producers in this category needed to be vetted. Both artists have multiple Grammys and an Oscar to their name, meaning if one of them were to reign victorious at the Emmys, they would be just one award away from achieving the elusive EGOT, a title given to people who have won at least one competitive Emmy, Grammy, Oscar, and Tony.

Gaga was nominated as a host alongside her longtime collaborator Tony Bennett for their special One Last Time: An Evening With Tony Bennett & Lady Gaga, which was filmed at Bennett’s final shows at New York’s Radio City Music Hall in August 2021. Adele was recognized as an executive producer for Adele: One Night Only, her CBS primetime special to promote her 2021 album 30 that included a star-studded show and an interview with Oprah Winfrey. One Night Only earned four additional noms, including Outstanding Directing for a Variety Special, while One Last Time picked up three extra nods, including Outstanding Music Direction.

Of course, it’s possible that Adele and Gaga could both lose the Emmy to another nominee. The artists will face off against Dave Chappelle’s controversial Netflix comedy special The Closer, HBO Max’s Harry Potter reunion special Harry Potter 20th Anniversary: Return To Hogwarts, and Netflix’s Norm Macdonald: Nothing Special.

However, if one of them were to prevail, they would only need a Tony Award to join the exclusive EGOT circle. Only 17 people have managed to win all four awards that comprise the EGOT, a group that includes Audrey Hepburn, Rita Moreno, and Andrew Lloyd Webber. Most recently, Jennifer Hudson joined the EGOT club on June 13 after winning the Tony for Best Musical as a producer on A Strange Loop, becoming the second Black woman to reach EGOT status after Whoopi Goldberg, and the third Black person overall, after Goldberg and John Legend.

More like this
Lady Gaga Will Star In 'Joker: Folie À Deux' With Joaquin Phoenix
By Jake Viswanath
Bridgerton’s Simone Ashley Stars In ODESZA's "Love Letter” Music Video
By Radhika Menon
Beyoncé Is The First Woman To Have A No. 1 Album Since Adele Did Almost A Year Ago
By Radhika Menon
Kathy Hilton Tried To Explain Why She Misidentified Lizzo As Precious On Live TV
By Jake Viswanath
Get Even More From Bustle — Sign Up For The Newsletter