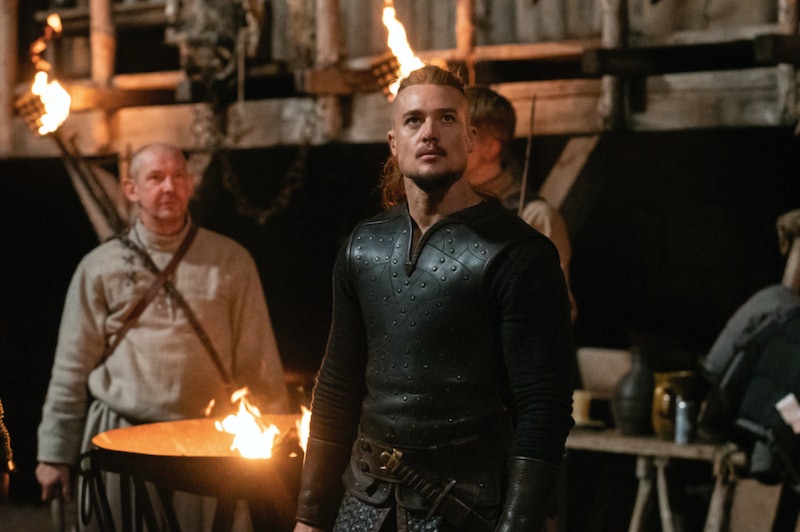 On March 9, Netflix will release the fifth and final season of The Last Kingdom, its fantasy series based on Bernard Cornwell’s popular novel series The Saxon Stories. Season 4 was loaded with betrayal, death, and intrigue, priming Season 5 to aptly wrap up Uhtred’s (Alexander Dreymon) quest for the throne — that is, if he can outlast the scores of enemies out for his head. Before you dive into the new episodes, here’s what to remember.

By the end of Season 4, childhood friends and former lovers Brida (Emily Cox) and Uhtred were sworn enemies, mostly because Brida wouldn’t turn her back on the Danish supremacy or give up her hatred of Saxons. Season 4 also delved into Brida’s fanaticism: Her belief in the path of Dane drove a further wedge between her and Uhtred, causing them to fight on opposite sides at the bloody Battle of Tettenhall. When the Dane army was ultimately defeated, Brida was left at Uhtred’s mercy. Not wanting to be a shamed prisoner, she begged him to kill her, but Uhtred was unable to fulfill her wish. Instead Brida was taken captive, abused, and mocked, only furthering her hatred for Uhtred.

She was eventually freed by a Danish warrior named Sigtryggr (Eysteinn Sigurðarson), who she later worked with to raid and pillage Saxon and Welsh villages. Things reached a fever pitch when Sigtryggr and Brida, along with an army, stormed the kingdom of Winchester in the absence of the King Edward (Timothy Innes). While there, Brida kidnapped Uhtred’s daughter, Stiorra (Ruby Hartley) and attempted to behead her. But Sigtryggr — who’d fallen in love with Stiorra — was able to save her from Brida’s blade. Sigtryggr then held both of the king’s sons captive, causing Uhtred to offer himself up as a hostage to save the boys. Sigtryggr agreed to the truce, much to the chagrin of Brida, who ended the season hellbent on vanquishing her former friend.

The Succession of Mercian

Season 4 also saw the death of Aethelred (Toby Regbo), the lord of Mercia, when he was betrayed and killed by Eardwulf (Jamie Blackley) at the Battle of Tettenhall. Eardwulf had plans to take the throne of Mercian for himself by marrying Aethelred’s daughter, Aelfwynn, (Helena Albright). However, when his marital plans were denied, he opted for murder — as one does. Eadith (Stefanie Martini), Aethelred’s mistress, saw Eardwulf kill Aethelred, forcing Eardwulf to flee from Mercia and join up with Brida and Sigtryggr. However, they killed him when they learn that he murdered Aethelred.

With most everything in shambles, Mercia still needed someone to sit on its throne. The Ealdormen of Mercia were tasked with finding a successor, but feared that whoever Aethelflaed (Millie Brady), Aethelred’s wife, remarried wouldn’t be able to be trusted with power. The Ealdormen eventually selected Uhtred, despite his objections, citing his Mercian heritage as their reason for choosing him. In a shocking move, Uhtred used his first act of power to resign, leaving the throne to Aethelflaed until her daughter Aelfwynn marries. Aethelflaed then took a vow of chastity to ease the fears of the Ealdormen.

The Many Mistakes Of King Edward

King Edward was never a wise king — especially considering how easily he was manipulated by his father-in-law Lord Aethelhelm, whose only interest was forcing his own family into power as Edward’s successor. In Season 4, King Edward imprisoned his own wife and mother as well as Uhtred. He hoped Uhtred would tell him the whereabouts of Aelfwynn, who was in hiding with Stiorra, but Uhtred didn’t break. Edward continued to show his ineptitude by nearly losing the Battle of Tettenhall, sending reinforcements before it was almost too late. Throughout the season, he also refused Uhtred’s advice and declined to help him regain his childhood land. But he eventually recognized Uhtred’s value and entrusted him to protect his first son, Aethelstan (Caspar Griffiths).

The Death of Father Beocca

Father Beocca (Ian Hart) and Uhtred had been friends since childhood, making the priest’s death at the end of Season 4 all the more heartbreaking. In hopes of defending his home of Bebbanburg, Uhtred asked King Edward for troops, but was promptly denied. Instead, Uhtred rode with a small party to win his land back from his uncle Aelfric (Joseph Millson). As the battle began, Aelfric was shocked to see the return of his son Wihtgar (Ossian Perret), who he’d assumed had died at sea. Wihtgar shot his father with a crossbow, then turned his bow toward Uhtred’s son. Father Beocca sacrificed himself by jumping in front of the arrow, saving Uhtred’s son but dying in the process.

More like this
'Bridgerton' Season 4 Will Likely Focus On This Brother's Divided Heart
By Grace Wehniainen and Alyssa Lapid
'Virgin River' Season 4 Finally Has A Release Date
By Bustle Editors
'Heartstopper's Kit Connor Revealed His Hopes For Season 2
By Nola Ojomu and Sam Ramsden
'Ghost In The Shell: SAC_2045' Was Only Supposed To Last Two Seasons
By Kadin Burnett
Get Even More From Bustle — Sign Up For The Newsletter