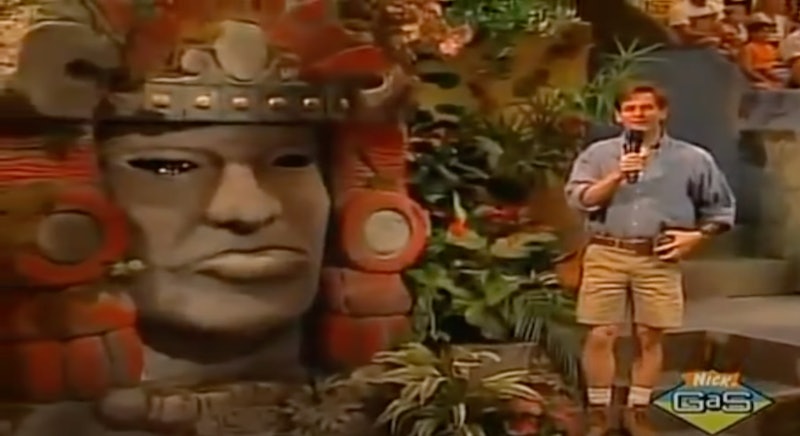 It’s another day, and another show you forgot existed is getting the reboot treatment: Nickelodeon’s Legends of the Hidden Temple, an early ’90s game show that sent kids into a dark, creepy, and fictitious Mayan temple in search of hidden treasures. Back in 2016, the competition series was reimagined as a television film that followed three siblings vacationing at a “Hidden Temple” theme park, where they quickly got caught up in a real-life treasure hunt. It must have been a smash hit because another revival of the series was announced in 2019 for Quibi. But as you likely remember, Quibi launched in April 2020 to lukewarm fanfare and subsequently shut down after eight months. However, on May 11, it was announced that the reboot is back in the works, this time at The CW. Here’s everything we know about the Legends of the Hidden Temple revival.

What Is The Legends of the Hidden Temple Reboot About?

Per Deadline, the rebooted adventure series will retain many aspects of its original version, which ran for three seasons from 1993 - 1995. That means Olmec, the all-knowing stone head, will return, along with the Moat Crossings, the Steps of Knowledge, and the Temple Run. Additionally, the series will use original team names like Purple Parrots, Blue Barracudas, Orange Iguanas, Red Jaguars, Silver Snakes, and Green Monkeys.

However, considering this incarnation of Legends of the Hidden Temple is being billed as an adult version, fans can expect many changes to come. For starters, as Vulture reported, the series will take place in a “jungle” rather than a studio setting, and it’ll see adult players competing in more difficult challenges for bigger prizes.

Who Is Involved In The Legends of the Hidden Temple Reboot?

The reboot will be produced by Stone & Company, which also produced the original version. Serving as an executive producer is Scott A. Stone, who created the series back in the ’90s alongside David G. Stanley and Stephen R. Brown. Marcus Fox, who executive produces Nickelodeon’s Paradise Run, will serve the same role on Legends of the Hidden Temple.

Whether or not original host Kirk Fogg or Dee Bradley Baker, who voiced Olmac in the ’90s series, will return is yet to be announced — though fans can hold out hope, considering that both Fogg and Baker appeared in the 2016 film.

When Is The Legends of the Hidden Temple Reboot Release Date?

The revival’s premiere date has not yet been revealed by The CW. Casting reportedly took place in Los Angeles over the summer, though no further details have been shared by the network.

This post will be updated with the trailer, release date, and additional details as more information on Legends of the Hidden Temple becomes available.