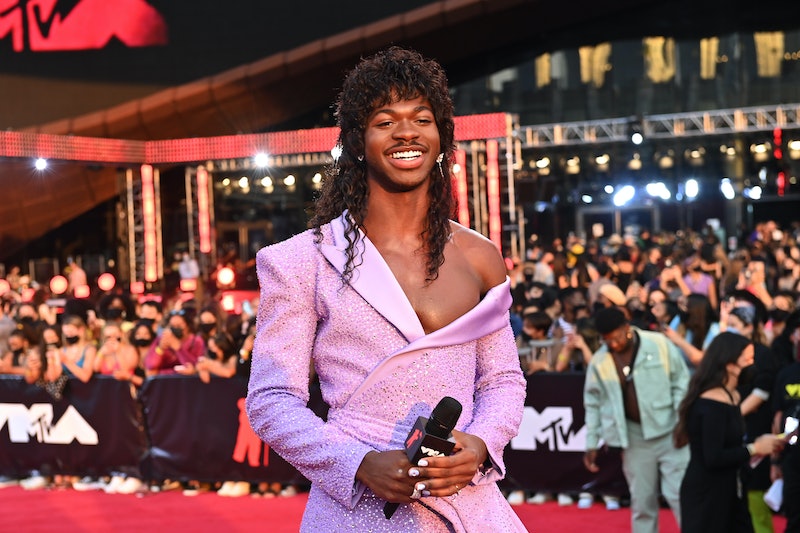 Two years after his hit “Old Town Road” was named the VMAs’ Song of the Year, Lil Nas X is back at the awards show to break the internet yet again. After walking the red carpet in a lilac one-piece designed by Atelier Versace (while rocking a mullet), the 22-year-old took to the stage and performed a mashup up of “Industry Baby” and “MONTERO (Call Me By Your Name).”

He opened his performance with a marching-band style procession, showcasing his signature dance moves. Things really got going about a minute into “Industry Baby,” when the musician shed his jacket, and the backdrop transformed to recall the music video — complete with prison bars and inmates in hot pink uniforms.

While Jack Harlow came onstage to finish his verse, Lil Nas X changed into bedazzled pink boxer briefs and matching knee pads (safety first!), and was joined by a cadre of shirtless men. Transitioning to his hit “MONTERO (Call Me By Your Name),” he and his disciples moved seductively in front of the words “Montero State Prison.”

This year, Lil Nas X’s “MONTERO (Call Me By Your Name)” is nominated for five awards (in the Video of the Year, Video For Good, Best Direction, Best Art Direction, and Best Visual Effects categories), landing him toward the top of the pack alongside artists like Billie Eilish, BTS, Doja Cat, and Olivia Rodrigo.

In five short days, Lil Nas X will continue his reign with the release of MONTERO, his debut studio album featuring hits like “Industry Baby.” He celebrated its imminent arrival with a playful People photoshoot, which recalled the celebrity pregnancy portraits that often grace the magazine’s pages. “SURPRISE! I can’t believe i’m finally announcing this. My little bundle of joy “MONTERO” is due September 17, 2021,” he tweeted along with the photos.

Below, check out what Twitter had to say about the star’s VMAs performance.

More like this
Everything To Know About Taylor Swift’s 10th Studio Album, 'Midnights'
By Grace Wehniainen and Jake Viswanath
Twitter Is Freaking Out Over Rihanna’s 2023 Super Bowl Halftime Show Announcement
By Stephanie Topacio Long
Lizzo Twerks While Playing James Madison's 200-Year-Old Crystal Flute Onstage
By Radhika Menon
What Demi Lovato Really Thinks About Child Stardom, Depression, & Sobriety
By Radhika Menon
Get Even More From Bustle — Sign Up For The Newsletter