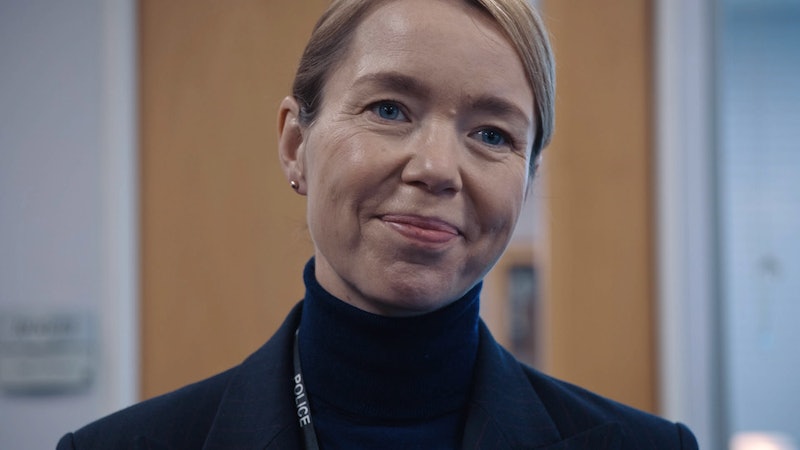 Spoilers ahead for Line Of Duty Season 6, Episode 6. Last night’s episode of Line Of Duty was another whopper, as we draw to the end of the season, audiences are left with more questions than answers. At this point, there are more overlapping storylines than there are bent coppers.

Episode 6 kicked off after the gunshot cliffhanger as Kate and the young Ryan Pilkington face off in a dark parking lot. He goes down, and Kate and Jo run off, only to be apprehended by AC-12. Not long after, they are questioned in what may be one of the most puzzling interrogations yet.

Naturally, fans took to Twitter to discuss Detective Chief Superintendent Patricia Carmichael’s very sus line of questioning and general smug attitude, Hastings’ never-ending Tedisms, and, of course, how this is all going to end. Will we ever get to the bottom of police corruption? Will we find out who H is? Here are the best memes and tweets about Line of Duty.

Carmichael Is Smugger Than Ever

Fans across the board are loving hating on the very smug Detective Chief Superintendent Patricia Carmichael, played perfectly by Anna Maxwell Martin. Already she’s been compared to the wonderfully evil Professor Umbridge from Harry Potter and mother of dragons Daenerys from Game of Thrones. Suspicions are running high on her bent status, too. Could she be the mysterious ‘H’?

Did Carmichael Just Admit To Being H?

Eagle-eyed fans have pointed out that Carmichael tapped her pen four times in the questioning room, which is Morse code for H, the fourth top dog in the police corruption ring — so this means she’s H, right?

Hastings Is Getting More Creative with His Exclamations

Ted Hastings is always going that extra mile with his biblical cries of exasperation, but this week he’s really been going through it. The result, therefore is dramatic... Poor wee donkey.

Whether it be the drama of the car chase (isn’t Kate the best driver ever?) of Arnott’s refusal to book that workplace health assessment, there is no shortage of drama that escapes the eagle eyes of the Twittersphere.

On The Most Underwhelming Cameo Of All

Remember all that banter about how James Nesbitt and Jed Mercurio were in cahoots all along? How they kept this essential role secret top secret? Well, they are either going to blow this out of the water and back onto UK territory, or Nesbitt’s role in Line of Duty is the most disappointing of all...

We’re All A Bit Confused Still

It’s the penultimate episode of Season 6, and fans are still a little confused by the intertwining storylines stretching back across all the previous seasons. There’s bent coppers, dead journalists, some cop is someone’s uncle from Season 3 or maybe Season 4, and H is still on the loose and now we’re in Spain... We’re trying our best!