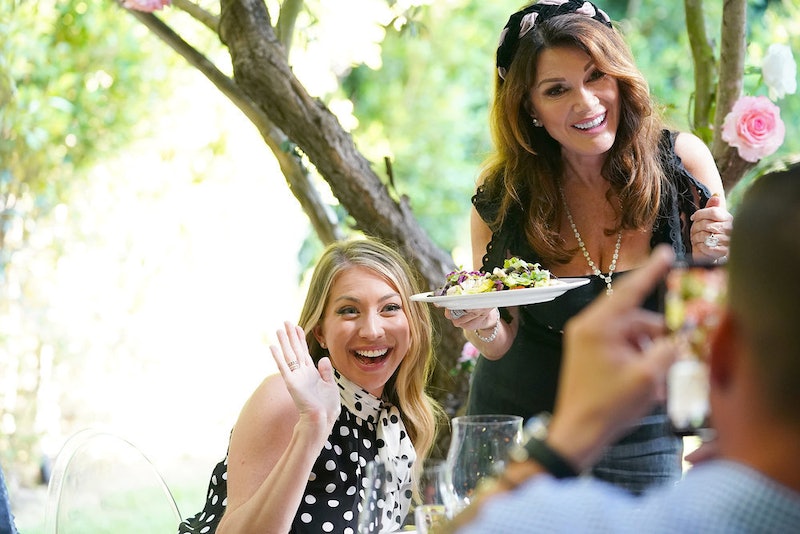 Lisa Vanderpump has always been forgiving when employees at her famous restaurants SUR and TomTom act very out of line — even when she probably shouldn't be. And the cast members involved in the show's biggest scandal are no exception. In a recent interview, Lisa Vanderpump said she wouldn't have fired Stassi Schroeder and Kristen Doute from Vanderpump Rules if it were up to her, but instead would have liked to see them learn from the experience.

Bravo and production company Evolution Media fired Stassi and Kristen from the series in June 2020 after former cast member Faith Stowers recalled in an Instagram Live interview that, a few years ago, the two friends attempted to accuse her of theft because they saw an article about a Black woman who was wanted for a crime. Brett Caprioni and Max Boyens, who joined the show for its eighth season in 2019, were also let go for their past racist tweets.

After initially releasing a tame statement on Stassi and Kristen's firings, the SUR owner addressed the controversy in a new interview with Entertainment Tonight, saying she hoped that they learned from their mistakes. "I think it's sad, really, what happened, because I do think that people can learn from their mistakes, and I'm all about that," she said. "I think you've seen that on the show. Of course, we do know that we're in this momentum of really people kind of standing up for what's right, and I'm all about that and embracing that — and I do believe in zero tolerance for that — but I also believe that you can come back from that and you're young and you can learn from it."

Vanderpump acknowledged that what her former cast mates did was "totally inappropriate," and claimed she understood why they were let go from the show. But, she still had a "very difficult" time coming to terms with the decision. "So, if it were up to me, I would like to see them go on, but really have a better understanding of where they went wrong," she explained. "I'm not into just kind of getting rid of people, because they get it wrong. Otherwise, I'd probably have nobody working for me at this point."

She also clarified that Stassi and Kristen no longer worked directly for her at her restaurants, hence why she had no control over Bravo's decision. She did not state whether Max and Brett, who worked at TomTom and SUR respectively on the show, were also being let go from their restaurant positions.

However, Vanderpump did promise that when Pump Rules does eventually return for its ninth season (the show was put on hiatus as her restaurants closed during the coronavirus pandemic), it will look very different, with new cast members and more diversity onscreen.