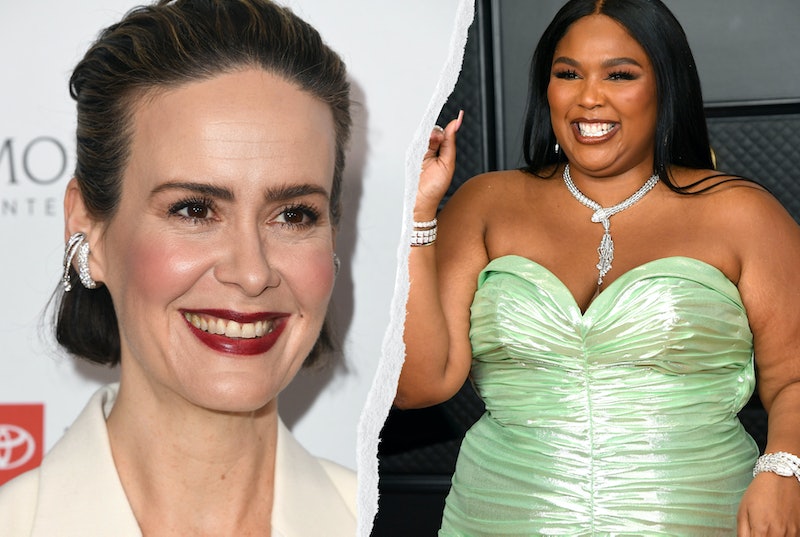 Viral TikTok sounds can originate anywhere — from hilarious home videos (“Oh no! Our table! It’s broken!”) to songs (see: Dwayne Johnson’s rap debut) and delightfully out-of-context moments in TV and film. “The killer is escaping!” audio is the latest example of the latter, a trending sound originally posted by user horrorcovwn in July. The sound, which comes from Sarah Paulson’s character in American Horror Story: Asylum, has been used in more than 380,000 videos and by a few famous faces, including Billie Eilish and Lil Nas X.

The voices behind these viral sounds don’t always know about their 15 minutes of TikTok fame, much less partake in the fun themselves. But Paulson’s iconic scream made it back to her in the best way: with a little help from Lizzo, that is. On Oct. 25, the “Rumors” singer joined Paulson in-person to lip-sync the viral sound.

“Help! He’s escaping! The killer is escaping! Help me!” goes the full dialogue. Lizzo posted two clips of the collab to her TikTok — one with full-blown horror flair and one that’s more subdued and closer to the popular riff on the trend in which users pretend bae’s watching, so they need to play it cool.

Paulson isn’t on TikTok (that we know of), but she responded to Lizzo’s repost on Twitter. “It’s meeeeeeeeee,” she wrote. “Miss u already,” replied Lizzo, to which Paulson added, “Don’t make me cry.”

Where and why were Lizzo and Paulson hanging out together? Was it solely for this collab? The seemingly new friends both live in Los Angeles, so perhaps they linked up to make TikTok history. (The videos are already some of the most viewed on Lizzo’s account.)

Days before the pair got together, Paulson and her AHS co-star Leslie Grossman discussed the trending sound over Instagram Live and even referenced Lizzo as one of the celebs she’d seen recreate the video. “Yes, I do know I’m a TikTok trend,” she proudly announced before trying to explain the sound’s popularity. “Somebody did a remix. A remix? I don’t know what it’s called. I’m such a nerd, you guys.”

User horrorcovwn, who originally posted the AHS clip, couldn’t be more excited to see the A-listers take on her viral moment. “WHAT THE HELL,” she wrote in a duet. “HELP ME GUYS WTF.”

More like this
New Details About Jeremy Renner's Snowplow Accident Reveal The Actor's Intentions
By Sam Ramsden
5 Wild Theories About Miley Cyrus’ “Flowers” Music Video
By Jake Viswanath
The Ticketmaster Senate Hearing & Taylor Swift Tickets Debacle, Explained
By Jake Viswanath
Paris Hilton Just Shared The First Photo Of Her Baby
By Sam Ramsden
Get Even More From Bustle — Sign Up For The Newsletter