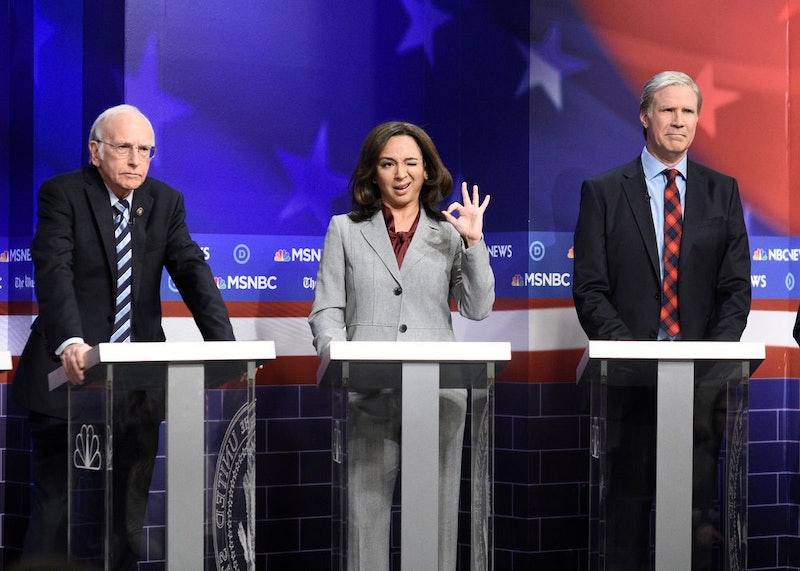 Following Joe Biden's announcement that he has chosen Kamala Harris as his running mate in the 2020 election, the Twitter immediately started asking the important questions, like, does this mean Maya Rudolph will return to Saturday Night Live? Well, Maya Rudolph herself reacted to Harris' VP news, and coronavirus-willing, she's ready to reprise her iconic role. "Oh sh*t. Ruh-roh," Rudolph said in reaction to the news, speaking during a panel with some fellow Emmy nominees for Entertainment Weekly. "That's spicy."

The comedian has already been nominated for an Emmy for Outstanding Guest Actress in a Comedy Series for playing Harris on SNL (she's also nominated for her roles on The Good Place and Big Mouth). And that Emmy nomination combined with Harris' big news can only mean one thing: that she's returning to SNL in the fall — assuming that SNL returns, that is — right? "I love going to the show any excuse I can get," Rudolph teased, though she admitted that her commitment would depend on coronavirus restrictions. "I just didn't really anticipate traveling during this pandemic, but if there's anyone who can work it out, I'm sure Lorne [Michaels] has some kind of invisible helicopter that can get me there."

If Michaels doesn't have a helicopter, he might want to start working on one. After Biden made his announcement on Tuesday, Aug. 11, Twitter lit up with fans demanding the return of Rudolph's iconic impression.

Hopefully, the coronavirus pandemic won't keep SNL off the air. The show had transitioned to SNL at Home shows during the end of Season 45 to accommodate stay-at-home orders, though it's unclear if NBC will want to bring the show back in a similar style come the fall. At least a virtual show would allow Rudolph to appear — no invisible helicopter needed.