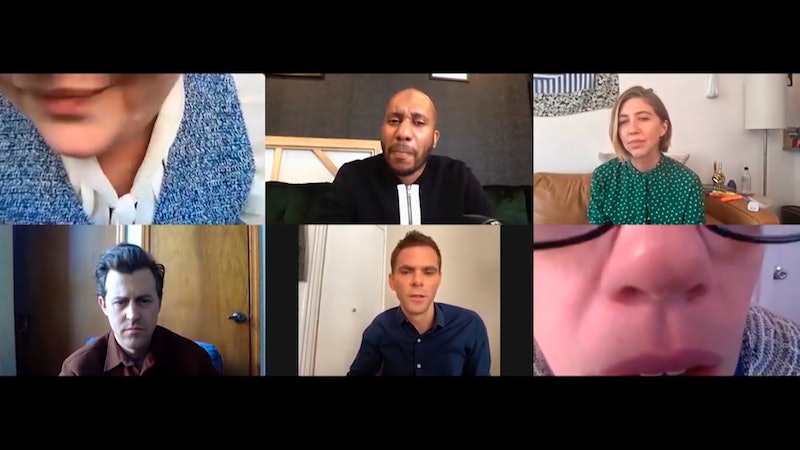 After the successful first remote episode hosted by Tom Hanks from his kitchen, Saturday Night Live is returning for a second at home episode this Saturday, April 25 on NBC. There's no word yet on who will be hosting or if there will be a musical guest, but given the surprise factor of having Hanks pop up in the first at-home episode, viewers should probably be prepared for anything. The show's cast announced the news that SNL would be returning this week with — what else — a Zoom conference call.

Due to the ongoing novel coronavirus pandemic, Saturday Night Live can't return to the hallowed halls of 30 Rock to film live episodes just yet. However, that doesn't mean that the cast can't still entertain viewers with sketches performed in their own living rooms, kitchens, and, in one memorable rap segment, from Pete Davidson's mom's front yard. The first at-home episode, which aired April 11, pulled in the long-running sketch show's second best ratings of the season, with only the Eddie Murphy hosted December outing doing better, per The Hollywood Reporter.

Cast members Keenan Thompson, Bowen Yang, Colin Jost, Aidy Bryant, Kate McKinnon, and more announced the new episode on Twitter, indicating that the whole gang is returning for another round of at-home sketches. The first at-home edition included several guest appearances from non-cast members too, with Alec Baldwin, Larry David, and Chris Martin all appearing, in addition to Hanks delivering the opening monologue.

While it felt a bit odd to see McKinnon doing a Ruth Bader Ginsburg workout sketch in her apartment, and Jost and Michael Che giving the "Weekend Update" from their respective homes, the first at home episode of SNL provided plenty of memorable moments and a sense of unity. The world is a scary place right now, but there's something comforting about watching the NBC show's cast parody Tiger King and take on Zoom call etiquette.

Now that McKinnon, Thompson, and the rest of the cast have one show under their belt, there's no telling what kind of glorious chaos the second SNL at home will bring. But comedy fans can look forward to watching it unfold Saturday at 11:30 p.m. on NBC.