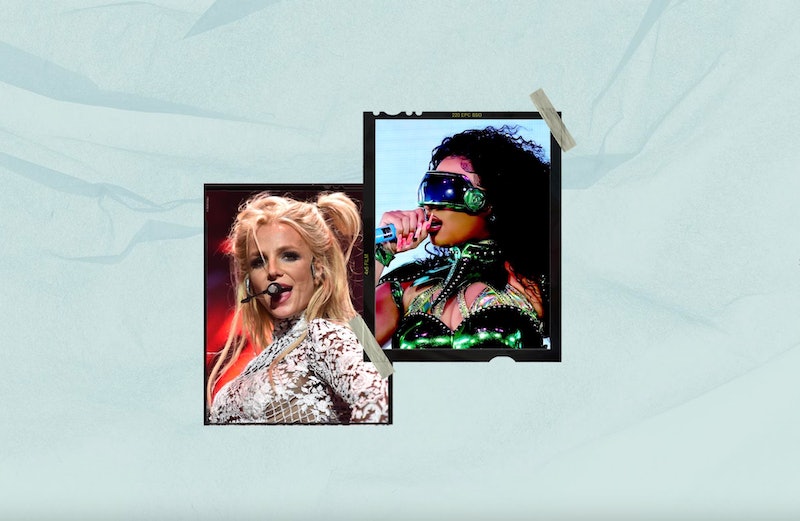 If Megan Thee Stallion’s new album, Traumazine, makes you want to dance one minute and cry the next, well, you’re not alone. Several fans tweeted about the rollercoaster listening experience, while Megan Thee Stallion herself took to Twitter to let them know that incorporating the “trauma” in Traumazine was a conscious effort. “Hotties I opened up to yall on this album so if you’re comfortable, how bout we have a conversation abt some things you might be going through or just want to vent about that you’ve been through that may help someone else,” she tweeted, encouraging fans to share their own stories with the hashtag #TRAUMAZINE.

On Aug. 11, Megan also told Jimmy Fallon that she approached the album’s creation like “writing in my diary,” rather than simply nailing a hit song. “I just want to talk about how I really feel, and get more personal ... this time around, I wanted to let everybody in my head and, you know, form their own opinion based off of my story. I wanted to take control of my own narrative.”

Part of that narrative includes being injured in a 2020 shooting by alleged gunman Tory Lanez, an event she references on “Who Me” — and the death of her mother, Holly Thomas, to brain cancer a year earlier, per People. She discusses the loss on “Anxiety.”

Megan’s mom is not the only woman she pays tribute to on “Anxiety.” She also references several pop culture icons, including Marilyn Monroe as “my favorite bad b*tch,” and mentions “jamming to Britney” and “singing to Whitney,” referencing Britney Spears and Whitney Houston, two more women known for their complicated relationships with fame.

“If I could write a letter to Heaven / I would tell my mama that I should have been listening,” Megan raps on the track, which discusses mental health. She also talks about asking her late mom for guidance about who’s real and fake in her life.

In an interview with Apple Music, the hitmaker said writing “Anxiety” was the “most hard” for her. “In my head I was going to write it in a diary, but then I was like, you know what, let me just try something different. Let me put it in a song. Anxiety is not even a song that I felt like I wanted to write for other people. I wrote it for me, to me… kind of like to my mama a little bit. And it was rough, but I mean, I got through it and I just felt like, ‘okay, I got that off my chest.’”

Shortly before the release of Traumazine, Megan responded to a fan on Twitter who said they’d recently lost their mom to cancer. “That is a pain that I would never wish on ANYONE!” she wrote. “I still haven’t even fully processed that my mom isn’t here and I can’t even barely say her name with out crying !!! Take it easy on yourself god got you !!!”

In 2019, Megan tweeted about her mom — and how Holly inspired her to keep pursuing music.

“After my mom passed I promised myself I was going to keep going hard bc not only is music my dream but it was her dream for me too,” she said. “I have days where I want to go hide and cry bc she’s not here but i kno that ain’t what she would want me to do! I kno she’s proud of me !”

This article was originally published on Aug. 12, 2022