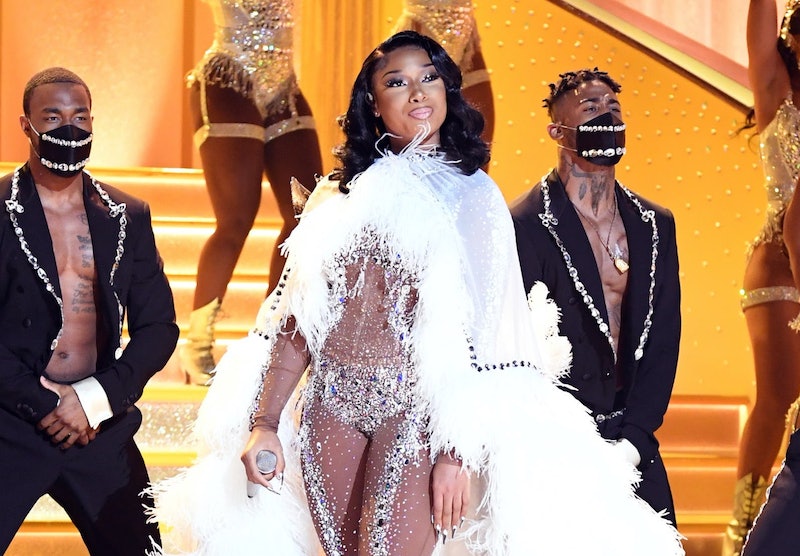 At the start of her music career, Megan Thee Stallion was an up-and-coming rapper in the Houston area while pursuing a college degree at Prairie View A&M University. After honing her skills on the streets while taking classes, her talent started to reach an audience beyond Houston and beyond Texas. It didn’t take too long for the hip-hop artist to become one of the most exciting stars in the genre with her viral hits, empowering performances, and fashion moments. She even secured a cameo in the Disney+ series She-Hulk: Attorney At Law.

Now, Stallion is a household name because of her hit songs. Her sophomore album Traumazine dropped on August 12, and critics and fans are already raving about . She was the most-nominated artist at the 2021 MTV Video Music Awards, a three-time Grammy winner, and a very wealthy woman as she often mentions in her lyrics. “What's the price these b*tches wanted? Tell 'em, ‘Up it’” she raps in the new song “Budget.” But at what price, exactly? Let’s break it down below.

While some of the richest musicians of all time earn the lion’s share of their millions (or billions) from activities not directly connected to the music they make, the wealthy stars who are just getting started as global successes, such as Stallion, usually still have their music to thank for their sizable bank accounts. To date, Stallion has charted three top 10 albums on the Billboard 200, two No. 1 hits on the Hot 100 (including the mega-viral “Savage”), one additional top 10 smash and a total of half a dozen top 40 wins on the all-encompassing ranking of the most popular songs in the U.S. All those tunes and projects have helped the rapper make millions, as she earns fractions of a cent every time people stream her songs and whenever they’re played on the radio.

On Spotify, Stallion now has 31.5 million monthly listeners, and at least six of her singles have accrued 100 million plays. Smashes like “WAP” with Cardi B, “Savage” with Beyoncé (and the version without her), “Beautiful Mistakes” with Maroon 5, and others have all been played hundreds of millions of times on all streaming platforms, making them massive cash cows. On YouTube, Stallion’s many videos have attracted a whopping 2 billion views, and while the advertising on these visuals do bring in cash, it’s not clear how much of it goes to her. A quick estimate suggests that her YouTube channel may have generated as much as $8 million in revenue.

Stallion has also become an in-demand rapper for features, and she has now contributed vocals to songs fronted by musicians like Ariana Grande (“34+35”), DJ Khaled (“I Did It”) and BTS (“Butter”). Rappers at the top of their game can request tens of thousands of dollars for just a few lines, and the superstar may take home anywhere between $25,000 and $100,000, based on what artists who are similarly popular earn for the same kind of work.

Stallion already ranks as one of the most successful female rappers of all time. She is one of the only women in rap to hit No. 1 on the Hot 100 more than once. With her new album Traumazine out and so many fans already raving about it, there’s a chance she can reach that benchmark again.

BET claims that the new class of rap superstars, which includes Stallion, may command as much as $100,000 or $150,000 per show. So far, however, touring doesn’t appear to be a major contributor to Stallion’s wealth, though that could change in the coming years. Many top-tier artists earn more on the road than they do from their music, but the “Savage” rapper hasn’t yet had the opportunity to make the most of her celebrity in this arena. She scored her biggest hits during the COVID-19 pandemic, so playing concerts or embarking on a major trek wasn’t an option. She has previously gone out to perform with Meek Mill and Future on their Legendary Nights Tour.

In 2022, she has upcoming international performances, and VR experiences for fans in the United States, according to her website. There’s a solid chance she’ll tour again with the release of Traumazine this year, so we’ll be saving up in the meantime. Stallion made her Coachella debut this year as well, but it’s unclear how much she made for her performance.

Already a celebrity, a tastemaker and a social superstar, it’s no surprise that a number of major brands like Revlon, Coach, and Fashion Nova have partnered with Stallion in order to reach her audience and align themselves with her unparalleled taste. While exact figures of what she was paid for these collaborations isn’t available (as is often the case), these deals undoubtedly helped make the rapper a multi-millionaire.

A year after she first posed for the makeup company, she launched her own Revlon capsule project, titled the Hot Girl Sunset collection, which sold very well. For Coach, she appears to largely model the high-priced handbags and fashion, but future endeavors could be in the makings between the two. Stallion doesn’t just work with ecommerce company Fashion Nova, she has her own collection as well, which features dozens of sexy items for women.

After proclaiming her love for their chicken sandwich in 2019, Stallion also partnered with Popeye’s in 2021, debuting the Hottie Sauce. The partnership also included merchandise such as bikinis with flames on them, and sweatshirts.

Stallion has already started dipping her toes into the TV and film world, which could help her become much richer in the future. She has acted here and there, though she certainly isn’t known as a force in that space. To date, her biggest role was in the TV show Good Girls, in which she played the character Onyx.

Stallion also served as a judge on two seasons of HBO Max’s Legendary, a reality competition show that focuses on the voguing culture. The program was just renewed for a third season, and the rapper will likely return, as she seems to be inspired by the performances she witnesses. It’s tough to pin down what she’d take home for this role, but seeing that she keeps going back, the cable giant is surely paying her well. It’s HBO money, after all.

Stallion’s friendship with Legendary castmate Jameela Jamil helped secure her a cameo in the Disney+ series She-Hulk: Attorney At Law. “She's perfect on so many levels,” director Kat Coiro told Entertainment Weekly of the singer, calling her “a powerful woman who embodies a lot of what She-Hulk embodies. And then it was a little cherry on top that Tatiana is the world's biggest Megan fan. As soon as that name came up, there was nobody else." She appeared as an “Asgardian shapeshifter pretending to be Megan Thee Stallion” according to EW, and the cameo did indeed include twerking with She-Hulk herself.

What Is Megan Thee Stallion’s Net Worth?

Celebrity Net Worth reports that the rapper’s net worth is currently $8 million. With a new album out and perhaps another tour on the way, Megan Thee Stallion’s wealth is bound to grow. As she said, “Talk big sh*t, but my bank account match it. Hood, but I’m classy, rich.”

More like this
What Is Miles Teller’s Net Worth? The 'SNL' Host's Bank Account Is No Joke
By Meg Walters
'Survivor' Host Jeff Probst's Salary Per Season After 22 Years Is The Real Winner
By Hugh McIntyre
Where Is Former Bachelor Host Chris Harrison Now & What Is His Net Worth?
By Hugh McIntyre
Beyoncé’s Special Tribute To Sister Solange Was Both Touching & Hilarious
By Stephanie Topacio Long
Get Even More From Bustle — Sign Up For The Newsletter

This article was originally published on Sep. 11, 2021