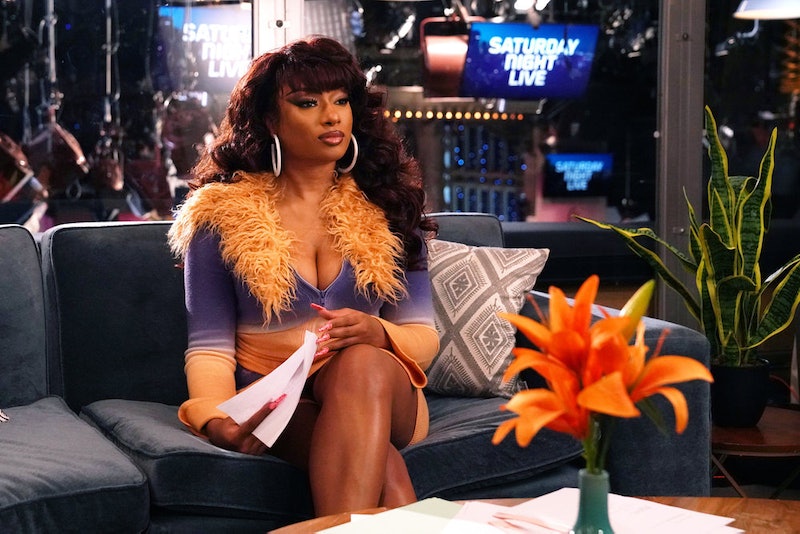 During a week that should be a huge high for Megan Thee Stallion, the rapper faced a blow: Two thieves broke into her home in Los Angeles on Oct. 13 and took hundreds of thousands of dollars’ worth of goods, per a TMZ report. Law enforcement sources told the outlet that the men’s stolen haul was worth $300,000 to $400,000.

Megan, who’s due to serve as both the host and musical guest of the Oct. 15 episode of Saturday Night Live, wasn’t home at the time of the crime. She did, however, speak out about what happened the following day. “Material things can be replaced but I’m glad everyone is safe,” she tweeted, adding a blue heart and a prayer emoji.

Several minutes later, Megan tweeted again, giving a better sense of where she was at mentally following the incident. “Hotties im really sorry but after SNL I really gotta take a break I’m so tired, physically and emotionally,” she wrote.

While some Twitter users didn’t show much empathy, plenty of her fans offered words of encouragement. “We understand boo, please never forget how much we hotties love you!!!!” one person wrote. Another told the rapper she doesn’t “ever need to be sorry!” They added, “It’s so understandable and we love you through anything, DO WHAT IS BEST FOR YOU!!! We always here for you.”

On the day of the robbery, Megan was hyping up her SNL gig. She shared a promo for her episode, plus photos from the shoot, which featured her in a sheer catsuit. “Hotties y’all ready for #stallionnightlive,” she wrote in one Instagram caption. Before that, she celebrated the announcement of her as host and musical guest on Sept. 20, tweeting, “OCT 15 THEE HOT GIRL COACH IS HOSTING AND PERFORMING ON SATURDAY NIGHT LIVE TUNE IN ALL HOTTIES.”

The three-time Grammy winner’s Oct. 15 episode will be her third time on SNL. She first appeared on the sketch comedy series on Oct. 26, 2019 when she came out as a surprise guest to perform “Handsome” with Chance the Rapper, who was the host and musical guest at the time. “Omg I absolutely CANNOT believe I was on SATURDAY NIGHT LIVE tonight,” she wrote on Instagram at the time, per Essence. “I wanna cry … thank you so much [Chance The Rapper] for having me perform with you.. tonight was everything.”

Later, on Oct. 3, 2020, Megan got to be the musical guest herself, and she used her time in the spotlight to call out Kentucky’s attorney general, Daniel Cameron, for the handling of the Breonna Taylor case. “We need to protect our Black women,” she said, per NPR. “And love our Black women ’cause at the end of the day, we need our Black women.”

Megan’s past SNL moments have been memorable and her upcoming ones likely will be, too — it’s just a shame she also happens to be going through such a difficult time.

More like this
Michael B. Jordan Tackled His "Public Breakup" With Lori Harvey On 'SNL'
By Brad Witter
The Black Lotus Staff Has "Had Enough" In The 'White Lotus' Spoof From 'SNL'
By Brad Witter
Who Is Pete Davidson Dating? He & Chase Sui Wonders Got Caught Kissing
By Jake Viswanath
Here’s Everything Coming To & Leaving Netflix In February
By Jake Viswanath
Get Even More From Bustle — Sign Up For The Newsletter
From hair trends to relationship advice, our daily newsletter has everything you need to sound like a person who’s on TikTok, even if you aren’t.