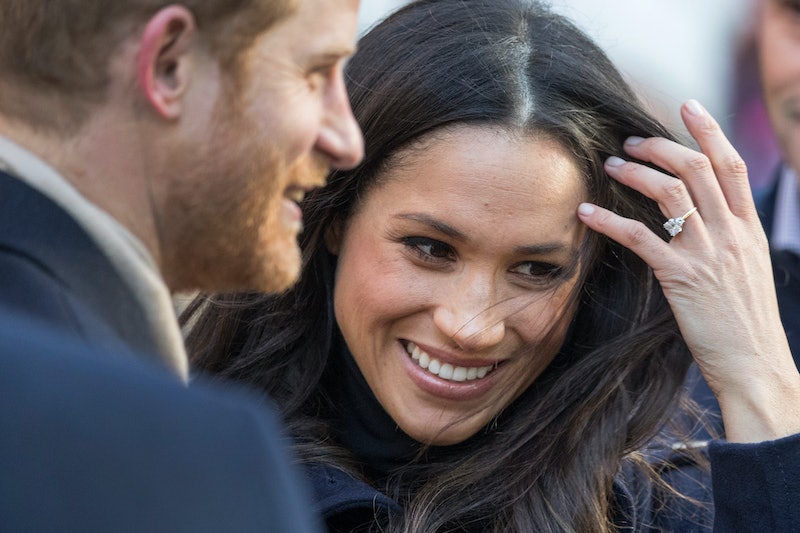 One particular excerpt from Finding Freedom: Harry and Meghan and the Making of a Modern Family might have just pulled the rug out from royal enthusiasts everywhere. The biography by Carolyn Durrand and Omid Scobie about Meghan Markle and Prince Harry’s life together, out Aug. 11, suggests that Meghan and Harry were already engaged one month before their official announcement. According to an exclusive excerpt published in Elle, Harry popped the question after their August 2017 trip to Botswana as Meghan prepared dinner at Nottingham Cottage — before their first public debut as a couple at the 2017 Invictus Games. (Who could forget the infamous engagement roast chicken?)

This suggests that Meghan and Harry were engaged sometime in September 2017, prior to their official engagement announcement in November 2017. “Theirs was a love story that took hold in Africa — where now Meghan, on the last day of an incredible three-week stay in August 2017, stretched her body into the perfect warrior pose” during yoga, the excerpt read, in part. Meghan “never imagined she would be laying out her mat as wild Cape buffalo grazed across the water,” nor did she “dare dream" that "the man beside her, the fifth in line to the British throne, would promise to make her his wife.” Harry apparently informed her of his intentions to marry and “quickly proved himself to be a man of his word” upon their return to London.

“Now that they were engaged, there was plenty of discussion at Kensington Palace about the couple making their public debut before the 2017 Invictus Games,” the excerpt continued. “What could be better than combining a public declaration to each other with perhaps Harry’s most important legacy?” (In a statement, Meghan and Harry said they did not cooperate or contribute to the book, and Scobie also reiterated that the couple had no involvement.)

Meghan and Harry eventually tied the knot in May 2018 and welcomed their son, Archie Harrison Mountbatten-Windsor, a year later. Later, in an unprecedented move, Meghan and Harry stepped back from royal duties (and dropped their HRH titles) in January. Finding Freedom also explores the couple’s life after their royal exit and their move to Los Angeles. In an interview with Good Morning America on Aug. 10, Scobie reflected on the couple’s legacy. “History will remember them as a couple that were perhaps failed by the institution of the monarchy, where there was this chance to have a woman of color, an American woman of color, in the House of Windsor representing the monarchy just as much as her husband,” the royal correspondent said.

“That was a chance for the royal family to have diversity, inclusivity, and representation in a way that no other moment in their lives could have brought,” Scobie continued. “For them to not have harnessed that is something I’m sure historians will be looking at for years to come.”