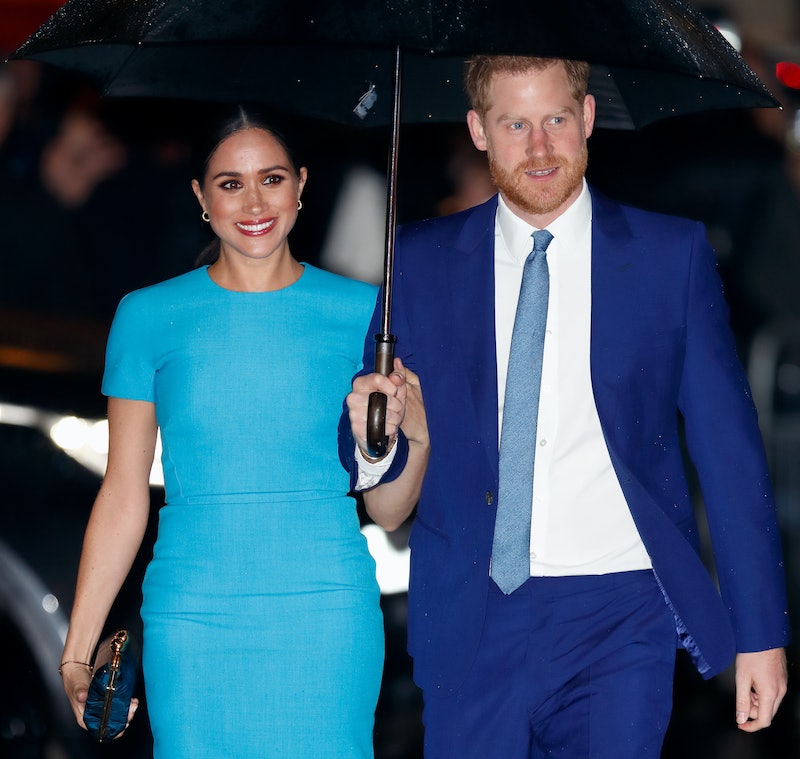 The Duke and Duchess of Sussex may still be at war with the paparazzi, but at least they've won their most recent legal battle. Meghan Markle and Prince Harry settled a lawsuit against paparazzi who used drones and long-range lenses to photograph their son, Archie Harrison, while he played in the backyard of their Los Angeles rental home. Photo news agency X17 also issued a public apology to Meghan and Harry for invasion of privacy and agreed to turn over all of the photos to the family, per The New York Times.

Back in July, X17 snapped the pictures of Archie and his grandmother Doria Ragland outside of the home Meghan and Harry were renting, and then attempted to sell them to various outlets by claiming that they were taken on public property. Shortly after the photos appeared in a German publication, Meghan and Harry filed an invasion-of-privacy lawsuit, and X17 ultimately confessed to being the source of the photos; the agency stated they were "wrong" to sell the invasive photos, according to a settlement filed in the Los Angeles Superior Court.

"We apologize to the Duke and Duchess of Sussex and their son for the distress we have caused," the agency said in a statement. “We were wrong to offer these photographs and commit to not doing so again."

In addition, X17 has agreed to give the photos back to Meghan and Harry, destroy any remaining copies, and pay some of the couple's legal fees. Most significantly, X17 has also agreed not to photograph or sell and photos of Meghan, Harry, or Archie that were taken "in any private residence or the surrounding private grounds."

The couple's settlement with X17 comes about a year after Meghan and Harry first began fighting the press over claims of harassment and invasion of privacy, and about six months after they officially stepped down as senior members of the British royal family. Still, there's more work for their lawyers to do.

On Oct. 1, 2019, Meghan and Harry announced a lawsuit against Associated Newspapers, the parent company of the U.K.'s The Mail on Sunday. In a statement at the time, Prince Harry cited “relentless propaganda” and “false and malicious” media harassment against Meghan as his reasons for taking legal action. "There is a human cost to this relentless propaganda ... and though we have continued to put on a brave face — as so many of you can relate to — I cannot begin to describe how painful it has been," he wrote.

In particular, the couple alleged that the tabloid violated their privacy by publishing a letter that Meghan wrote to her father, Thomas Markle, after their wedding, and editing it in such a way that it "purposely misled" readers about the situation. The Mail on Sunday denied that they had edited the letter "in any way that changed its meaning" and released a statement standing by the story, and announcing their intention to fight the charges.

Meghan faced a drawback in May 2020 when a judge struck out claims of the publisher acting "dishonestly," calling them irrelevant to the allegations of misuse of private information, infringement of copyright, and breach of the Data Protection Act 2018, per Page Six; as a result, Meghan agreed to pay almost $90,000 in legal fees in July. However, a spokesperson for her law firm, Schillings, noted at the time that "the core elements of this case do not change and will continue to move forward." It has been extensively covered by the media.

The Sun And The Daily Mirror Lawsuit

On Oct. 4, 2019, Harry filed a second lawsuit over alleged phone hacking against two other tabloids, The Sun and The Daily Mirror. The cases center on voicemail messages that were allegedly obtained illegally. This lawsuit is also ongoing.

Most recently, Meghan and Harry filed suit against Splash News for publishing photos of Meghan and Archie during a trip to Vancouver in January, as The Daily Mail reported. They allege that the photos violate the Data Protection Act and are a misuse of private information. According to court documents, the pictures were taken during "a private recreational outing on Vancouver Island," but that the photographer who took them had been seen outside of Meghan and Harry's residence the day before. He allegedly "said he was casing their home, testing his light meter and taking photos through the security fence," so the couple's lawyers argue that "he was not at the park by accident." This case is also ongoing.

While their decision to sue the paparazzi and media outlets who have invaded their privacy has been a controversial one, Harry has said that he feels he has no other option to protect Meghan, comparing her treatment to that of his mother, Princess Diana, who died in a 1997 car crash after being trailed by photographers. "I’ve seen what happens when someone I love is commoditised to the point that they are no longer treated or seen as a real person," Harry wrote in his October 2019 statement. "I lost my mother and now I watch my wife falling victim to the same powerful forces. ... [My] deepest fear is history repeating itself."

More like this
Prince Harry Incorrectly Recites Christina Aguilera’s “Genie In A Bottle” Lyrics
By Jake Viswanath
Man Meets Politics: ‘Boy Meets World’ Star Ben Savage Is Running For Congress
By Jake Viswanath
Here’s Why Tyler Perry Helped Prince Harry & Meghan Markle When They Moved
By Marina Watts
Meghan & Harry Respond To Jeremy Clarkson’s "Apology" Over *That* Column
By Sophie McEvoy
Get Even More From Bustle — Sign Up For The Newsletter
From hair trends to relationship advice, our daily newsletter has everything you need to sound like a person who’s on TikTok, even if you aren’t.